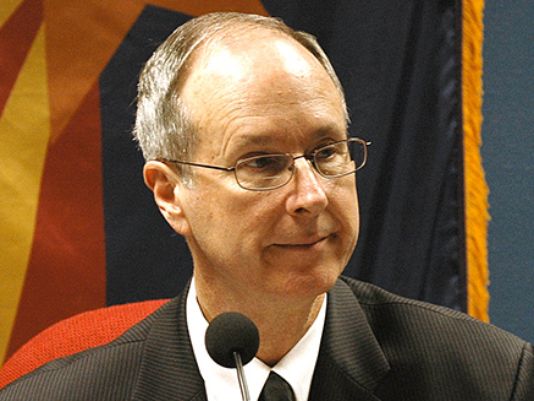 Arizona state representative Bob Thorpe, a Republican, has just proposed a bill that would ban any school courses or extracurricular activities that “promote” any kind of “social justice” or “solidarity” based on race, class, gender, politics, or religion.

The legislation, House Bill 2120, also appears to connect classes on social justice and solidarity with “promotion of the overthrow of the United States government,” which it also explicitly outlaws.

Tucson.com reports that “Thorpe said Thursday his bill is aimed specifically at things like a ‘privilege walk’ exercise (pdf) sponsored by the University of Arizona and a course entitled ‘Whiteness and Race Theory’ at Arizona State University.”

The law is sweeping yet fails to define many of its tenets—for example, it allows the teaching of “accurate” history of an ethnic group, but doesn’t define who or what would determine what is accurate. And Arizonans fear that not only does it threaten students’ and teachers’ rights to freedom of expression and assembly, but that it would go so far as to outlaw all charity efforts and most student groups at schools around the state.

Brendan Mahoney, a member of the Phoenix Human Relations Commission, “wondered when social justice—the idea that people should work for the good of one another—became such a horrifying threat,” writes local news outlet AZCentral:

He says a high-school program to feed the homeless or a first-grade class project to send care packages to victims of natural disaster are examples of attempts to provide “social justice” toward “a class of people”—the very thing Thorpe’s bill outlaws.

“One could wonder how an elected official could sponsor something profoundly un-American,” he said. “But reading between the lines, it’s obvious the bill is targeting groups that our Legislature would rather not exist: Black Lives Matter, LGBT, undocumented, Dreamers.”

In the Republican-dominated Arizona state legislature, the bill could very well pass, observers say, particularly as the state in 2010 already banned all ethnic studies classes.

As commentator Shaun King argues: “For all of their talk about local rights, it’s deeply telling to see conservative lawmakers go so far as to say what individual dormitory directors and instructors can and cannot discuss with their students. Conservatives like Thorpe are fully willing to be control freaks when it protects white supremacy and cultural hegemony—then say they stand on the principles of local control when it benefits them.”

Indeed, the Arizona bill comes as Republican-dominated legislatures across the nation are passing sweeping right-wing laws aimed at dismantling worker protections and civil rights, while a far-right president-elect prepares to be sworn in next week in Washington, D.C.

“I have a hunch this bill is not an anomaly, but a troubling sign of things to come,” King says.