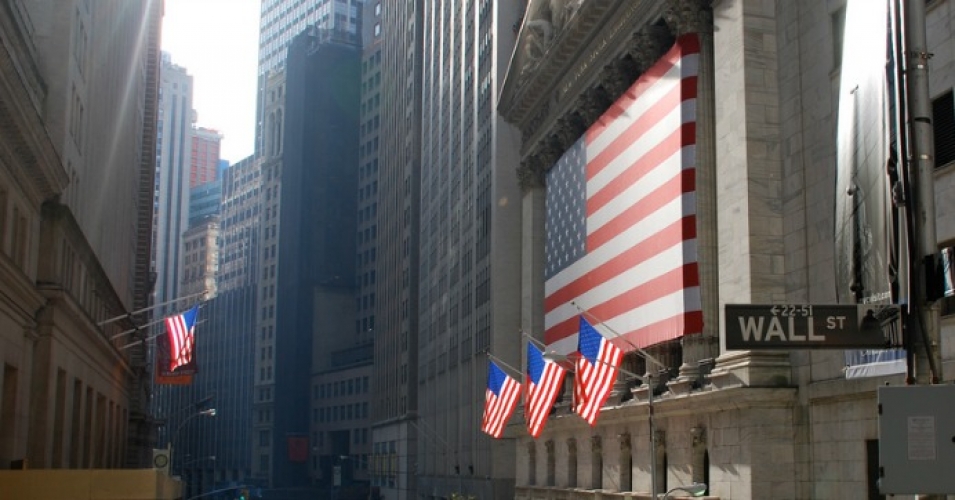 Executive orders seen as “a cave-in to the power of Wall Street and the financial lobby.” (Photo: Dave Center/flickr/cc)

President Donald Trump is handing the U.S. economy “back over to Wall Street” on Friday, with a regulatory rollback that critics say could put consumers and the financial system at risk.

According to the Wall Street Journal, Trump signed executive orders Friday “establish[ing] a framework for scaling back the 2010 Dodd-Frank financial-overhaul law” and rolling back an Obama-era regulation requiring advisers on retirement accounts to work in the best interests of their clients. That rule was set to go into effect in April.

Trump signed the orders after meeting with bank CEOs.

“The worst job-destroying economic crisis since the Great Depression was directly caused by deregulation and regulatory failure,” he said. “Now the president who ran on a jobs-creation platform announces that he aims to slash the modest measures put in place to prevent a recurrence of the crisis. If Trump succeeds in rolling back Dodd-Frank rules he will rush the country straightforward into another job-killing financial crisis. This may be the most spectacular betrayal yet by the president of his voters, as he shunts aside their concerns and pushes forward the agenda of his cronies and the well-connected.”

Furthermore, White House National Economic Council director Gary Cohn, who formerly served as president of Goldman Sachs, told the Journal that Friday’s memoranda were merely “a table setter for a bunch of stuff that is coming.”

Also in the administration’s crosshairs are the Financial Stability Oversight Council (FSOC)—which has the ability to designate and rein in giant financial institutions that are “systemically important” to the global economy—and the Consumer Finance Protection Bureau (CFPB), which has cracked down on predatory payday lenders; set new standards for the mortgage market; and recovered and sent back billions of dollars for consumers harmed by illegal practices of credit card companies, banks, and debt collectors. Both entities were established by Dodd-Frank.

Bloomberg described the orders as “the most aggressive steps yet by Trump to loosen regulations in the financial services industry and come after he has sought to stock his administration with veterans of the industry in key positions.”

In addition to Cohn, Trump’s cabinet includes Goldman alums Steven Mnuchin, the nominee for treasury secretary, and chief strategist Steve Bannon, who worked at the institution in the 1980s. Wall Street lawyer Jay Clayton, Trump’s pick to run the Securities and Exchange Commission (SEC), also has ties to Goldman Sachs.

Former Wall Street worker Alexis Goldstein laid out the implications of Trump’s orders in a series of tweets on Friday: 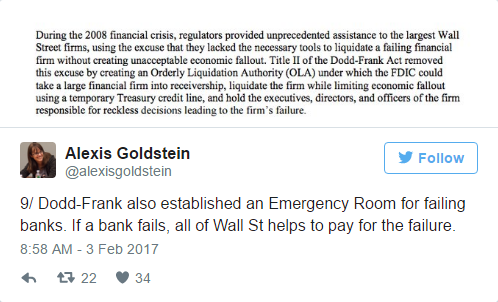 Meanwhile, in an op-ed Friday, Lisa Donner of Americans for Financial Reform and Ed Mierzwinski of U.S. PIRG focus specifically on the CFPB, saying any attempt to “defang” the agency “will be seen for what it is: a cave-in to the power of Wall Street and the financial lobby. Hollowing out the CFPB would be terrible for American consumers and families, hugely increasing the ability of banks and financial companies to write their own rules and control their own regulators.”

In a separate statement after Trump signed the orders, Donner declared: “Wall Street titan Goldman Sachs seems to be taking over financial regulation in the United States, trying to make it easier for them and other big banks like Wells Fargo to steal from their customers and destabilize the economy. That is a betrayal of the promises Trump made to stand up to Wall Street. If they succeed it will have painful consequences.”

And Sen. Elizabeth Warren (D-Mass.), who on Friday released a report (pdf) detailing the kinds of prizes and kickbacks currently offered to retirement advisers for selling certain financial products—the very conflicts of interest that the so-called fiduciary rule seeks to eliminate—blasted Trump’s orders.

“The Wall Street bankers and lobbyists whose greed and recklessness nearly destroyed this country may be toasting each other with champagne,” she said in a statement, “but the American people have not forgotten the 2008 financial crisis—and they will not forget what happened today.”