‘Standing Rock was just the beginning’ 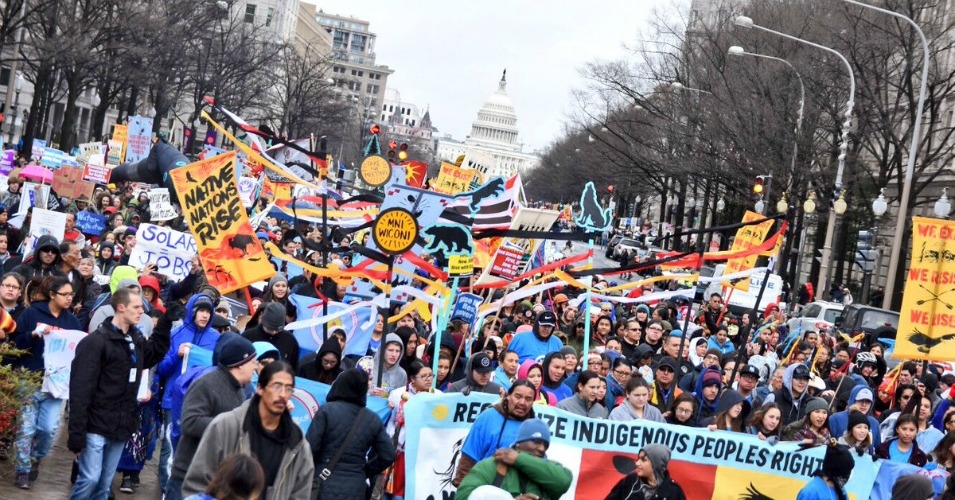 The march began at the U.S. Army Corps of Engineers headquarters and ended at Lafayette Square. (Photo: Zoë Flo/Twitter)

“Water is life!” was the cry heard throughout Washington, D.C., on Friday as thousands of people filled the streets and marched for Indigenous rights and the sovereignty of native nations, demonstrating that the fight against the Dakota Access Pipeline has sparked an ongoing movement.

Indigenous people across Turtle Island rising as one on the streets of Washington DC#nativenationsrise #stoppipelines #cdnpoli #waterislife pic.twitter.com/sR6npku1Ng

The Native Nations Rise march was the culmination of a week of workshops, actions, and prayers to battle for native rights in the face of the right-wing Trump administration and the ongoing #NoDAPL fight.

The march began at the U.S. Army Corps of Engineers headquarters and ended at Lafayette Square, in front of the White House. En route, demonstrators erected a tipi at the Trump Hotel to “reclaim stolen land”:

This is the scene right now in front of Trump Hotel in DC. We will fight to protect our homelands & future generations #NativeNationsRise. pic.twitter.com/dAlOPtxXwS

Afterward, the rights and land defenders marched on to the White House:

Arriving to the White House, stretching for blocks #NativeNationsRise pic.twitter.com/3oVmBDGf8B

The march culminated in a rally at Lafayette Square. Indigenous people and protesters spoke, prayed, played music, and repeated calls for environmental justice, sovereignty, and a meeting between President Donald Trump and leaders of tribal nations.

“Standing Rock was just the beginning,” said a journalist with Indigenous Rising Media, speaking to a plaintiff in one of the multiple lawsuits against the U.S. government for permitting the Dakota Access Pipeline’s construction.

A live broadcast of the march and rally can be found here. Throughout the day, participants and journalists are also posting photos and videos of the action under the hashtag #NativeNationsRise: