As many as 1,500 political detainees are taking part in the demonstration demanding ‘freedom and dignity’ 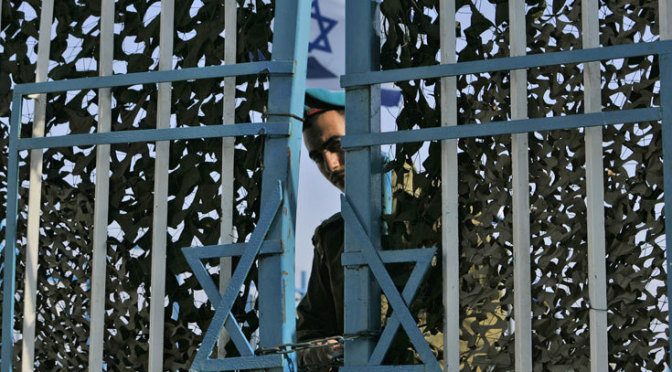 Some said as many as 1,500 political prisoners in six jails across Israel were participating in the open-ended strike, commemorating Palestinian Prisoners’ Day and coming ahead of June’s 50-year anniversary of the 1967 Six Day War, when the occupation began. Solidarity rallies were also taking place in the occupied cities of Ramallah, Hebron, and Nablus.

According to the human rights and prisoner advocacy organization Addameer, which is urging global solidarity with the detainees, “the hunger striking prisoners’ demands include: family visits, proper medical care, end to Israel’s practice of detaining Palestinians without charge or trial in so-called administrative detention, and stopping the use of isolation.”

“Israel has established a dual legal regime, a form of judicial apartheid, that provides virtual impunity for Israelis who commit crimes against Palestinians, while criminalizing Palestinian presence and resistance,” he wrote. “Israel’s courts are a charade of justice, clearly instruments of colonial, military occupation. According to the [U.S.] State Department, the conviction rate for Palestinians in the military courts is nearly 90 percent.”

Among the hundreds of thousands of Palestinians whom Israel has taken captive are children, women, parliamentarians, activists, journalists, human rights defenders, academics, political figures, militants, bystanders, family members of prisoners. And all with one aim: to bury the legitimate aspirations of an entire nation.

Instead, though, Israel’s prisons have become the cradle of a lasting movement for Palestinian self-determination. This new hunger strike will demonstrate once more that the prisoners’ movement is the compass that guides our struggle, the struggle for Freedom and Dignity, the name we have chosen for this new step in our long walk to freedom.

“Ahmed,” a 32-year-old from Hebron currently held in administrative detention in Ketziot prison in the Negev desert, told Amnesty International that he was joining the mass hunger strike in the hope that it will pressure the authorities to allow his 70-year-old mother, who has been repeatedly denied a permit, to visit him. Ahmed, who said he’d been arrested seven times in total, has spent a cumulative five and a half years in an Israeli prison—but has only had one family visit in that time.

“In 2006 my mother and father were able to visit me because my father was sick,” Ahmed told Amnesty for its report released Monday. “He was 75 then, it was the last time I saw him. He died while I was in prison.”

Now, he said, his mother is being denied a visitation permit. “The Israeli authorities are using the permits to punish me,” Ahmed said. “I don’t know how long [my mother] has [left] and if I will be able to see her if or when I am released.”

Magdalena Mughrabi, deputy regional director for the Middle East and North Africa at Amnesty, declared: “Israel’s ruthless policy of holding Palestinian prisoners arrested in the Occupied Palestinian Territories in prisons inside Israel is a flagrant violation of the Fourth Geneva Convention. It is unlawful and cruel and the consequences for the imprisoned person and their loved ones, who are often deprived from seeing them for months, and at times for years on end, can be devastating.”

The mass action, described as one of the largest in recent years, also has widespread political support.

“On this day, we are reminded of the pain of imprisonment, the cruelty of the occupation, and the injustice of the prison cells, as we are reminded of our pride in your steadfastness and sacrifice,” Palestinian Authority prime minister Rami Hamdallah said in a recorded video message shared on his Twitter page. “In the midst of this battle I call on all the Palestinian people and national institutions to show more solidarity so we can deliver the message of the prisoners to the whole world. Let us all push for the largest international, popular, and official movement to stand by the prisoners in this critical time.”