With a number of important regulations already dismantled and many more on the chopping block, the public was asked to give input—and respond they did 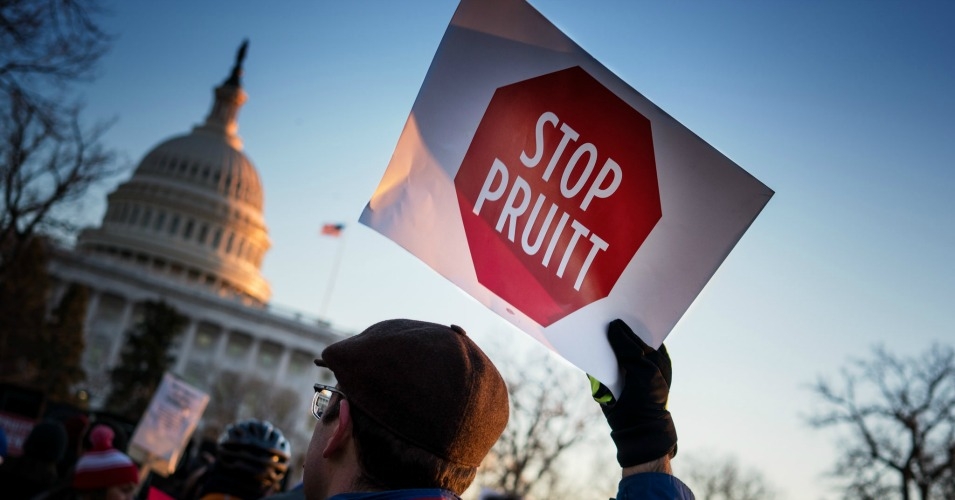 It turns out, Environmental Protection Agency (EPA) head Scott Pruitt’s plan to gut environmental protections is wildly unpopular as a call for public comment amassed nearly 60,000 responses that ranged from simply “No” to passionate reminders that the “EPA is for the people.”

The public comment period, which closed on Monday, gave voters a chance to weigh-in on President Donald Trump’s effort to “alleviate unnecessary regulatory burdens,” as stated in a February executive order that directed federal agencies to “evaluate existing regulations…and make recommendations…regarding their repeal, replacement, or modification.”

Pruitt, who as EPA administrator is charged with enforcing the nation’s environmental laws, has long been a foe of regulations and upon taking office also vowed an “aggressive” rollback of rules protecting clean air and water.

With a number of important regulations already dismantled and many more on the chopping block, the public was asked to give input—and respond they did.

“Why the HELL is this even a question? Why the HELL do we have to protest on behalf of facts?” one wrote, referencing the Trump administration’s widespread War on Science. “Maybe you’ll all be happy when our planet is dead and the entire coast of the country is underwater. It is despicable that you think your opinion somehow trumps facts and scientific evidence. I don’t understand how someone can be so unimaginably stupid. I’m a scientist, and I can’t wrap my head around it.”

One anonymous respondent succinctly declared “Earth over party!” while another thoughtfully extolled the benefits of regulations:

You have got to be kidding. Why would any sane person want to remove regulations that have contributed to lower death rates and less disease? This nonsense about environmental regulations being job killers is, on the face of it, ludicrous. This cannot be left to the states. Rivers flow across state lines. Air doesn’t recognize state lines. Do we really want China to be the leader in new technology, e.g., the number one manufacturer of solar panel technology?

Don’t we have an obligation to lead the world? How is it that Sweden is so good at recycling that, for several years, it has imported rubbish from other countries to keep its recycling plants going. Less than 1 per cent of Swedish household waste was sent to landfill last year or any year since 2011. Why are we not doing this? Lack of regulation is the answer.

The cost/benefit of regulations that protect the environment are pretty straightforward, and they are heavily weighted toward benefit. In some cases, a few jobs might be lost, but mostly lower health costs over the long term will easily outweigh those losses. This coal job creation nonsense is a great example. Most coal jobs have been lost to automation, not regulation. They aren’t coming back. Coal can’t be “clean.” That’s an argument without scientific merit. It’s time to rely on science instead of denigrating it. Science has no agenda. It is not political. We need to follow the science, and the science tell us that protecting the environment is key to our survival.

According to the Washington Post, “One commenter simply wrote the word ‘No’ over and over, 1,665 times.”

Another said that “Repealing regulations that encourage more sustainable practices is the height of idiocy.”

“Please don’t undo years of protections,” one pleaded. “Please be members of our planet and not her enemies. Please don’t do this! Water is life.”

“Have we failed to learn from history, and forgotten the harm done to our air, water, and wetlands?” asked Karen Sonnessa from New York. “If anything, regulations need to be more stringent. I remember the days of smog, pollution, and rivers spontaneously combusting. EPA is for the people.”

As the Post noted, the comments “also include submissions from business leaders and industry groups, suggesting technical changes to certain rules or asking EPA to streamline reporting requirements.

“But,” it continued, “the vast majority of comments, thousands upon thousands, echoed the sentiments of Jeff Baker, an investment strategist in Huntsville, Ala. ‘I’m well aware that excessive regulation can impose an undue burden on businesses both small and large. However, what is less discussed these days are the economic and societal costs already avoided and prevented by current rules…I implore you, as defenders of our nation’s health and security, to avoid shortsighted steps that might create prosperity for a few in the short term, at the expense of the many in the long term.'”

The flood of public participation was heralded by the alternative EPA Twitter account, which also drew attention to an opportunity to comment on Trump’s recent executive order to rescind “monument” status from 27 national U.S. monuments.

“The more people learn about how the Trump EPA plans to walk away from its duty to protect our water, the more people are outraged,” Environmental Working Group president Ken Cook said earlier this month in response to the windfall of public remarks. “If the president doesn’t get that message, I’m sure members of Congress will—at least the ones who aren’t afraid to face their constituents at town hall meetings.”