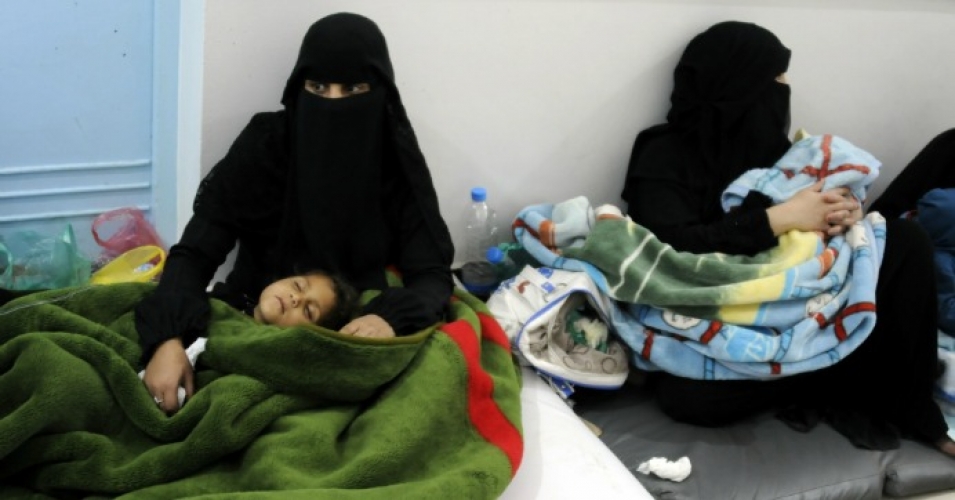 In exchange for the $110 billion package, said to be the largest arms deal in history, Saudi Crown Prince Mohammed Bin Salman has offered “to invest at least $200 billion in American infrastructure and open up new business opportunities for U.S. companies inside the kingdom,” according to Alternet‘s Max Blumenthal, a move that is expected to win the U.S. president points in the rust belt states of Ohio, Michigan, and Wisconsin.

“The weapons,” Blumenthal added, “would then be used to pulverize Yemen.”

The deal, partially brokered by Trump’s son-in-law and adviser Jared Kushner, includes a Terminal High Altitude Area Defense (THAAD) system, as well as precision guided-munitions that had previously been withheld by the Obama administration “out of fear that they would be used to bomb civilians in Yemen,” the New York Times reported. During his time in office, former President Barack Obama oversaw $115 billion in arms sold to the Gulf state.

“The package also includes ‘maritime assets,’ meaning ships, so the Saudis can assume more of the burden of policing the Persian Gulf and Red Sea against Iranian aggression,” the Times further wrote. “It does not include high-end items like the advanced F-35 fighter, whose sale to Saudi Arabia would alarm Israel.”

Trump is expected to receive a “royal welcome” in the capital Riyadh, where the Saudis are hosting an Arab Islamic American Summit with leaders from dozens of Muslim countries. Trump, a prolific tweeter, is also expected to give a keynote on social media use as well as a speech at the inauguration of a new counterterrorism center said to be focused on Islam.

Blumenthal notes: “The address will likely have less to do with tolerance than with interests that converge around hostility to Iran, the drive to destroy a government in Yemen that is seen as its proxy, and selling the tens of billions in weapons the meat grinder operation requires.”

Kristine Beckerle, Yemen and Kuwait researcher with Human Rights Watch, is among many who have warned that the U.S. risks being complicit in war crimes in Yemen, as the latest sale is being brokered amid mounting evidence of unlawful attacks.

“There is no mystery here,” she continued. “The Saudi-led coalition has committed scores of unlawful attacks, many amounting to war crimes. Continued arms sales not only send a clear message to the coalition that it can kill civilians with impunity, but they increasingly put U.S. officials at legal risk for aiding those crimes.”

Notably, the Trump administration has been forthright about its disinterest in enforcing human rights abroad, with Secretary of State Rex Tillerson recently explaining that such concerns would not interfere with U.S. foreign policy.

Throughout the visit, the American delegation will meet with many members of the Saudi-led coalition that has been bombing Yemen with U.S. assistance for more than two years.

The visit will take place as the embattled nation “is in the grip of a humanitarian crisis,” the International Committee of the Red Cross (ICRC) said Thursday, as “two million people have been displaced, malnutrition is rife, and, the United Nations estimates, a Yemeni child dies every ten minutes from preventable illnesses. Now a cholera outbreak has become the latest, deadly threat.”

Yemen could see as many as 300,000 cases of cholera within six months and an “extremely high” number of deaths, the World Health Organization (WHO) warned on Friday, as aid groups have struggled to contain the epidemic partially because of the nation’s devastated health facilities and infrastructure.

To date, over 23,400 suspected cholera cases and 242 deaths have been reported in 18 governorates, WHO noted.

“The speed of the resurgence of the cholera epidemic is unprecedented (for Yemen),” WHO Yemen representative Nevio Zagaria told reporters.

Caused by the ingestion of the Vibrio cholerae bacterium from fecally contaminated water or food, cholera’s sudden onset of acute watery diarrhea and can kill within hours, although three-quarters of infected people show no symptoms. The short incubation period means outbreaks can spread with explosive speed, especially in places without safe water and proper sanitation, according to the WHO.

Yemen has been ruined by two years of civil war, with 18.8 million people needing humanitarian aid, many of them on the brink of famine, and less than 45 percent of health facilities fully functional.

The United Nations published a map on Friday highlighting how the cholera outbreak is spreading “in exactly the same places that are suffering most from food insecurity.”

“We have a situation where the areas most affected by Cholera are also the most insecure,” according to UN Dispatch. “Unless there is a de-escalation of the conflict, these numbers will only get worse.”

Unfortunately, one possible outcome of Trump’s visit could be a green light to attack the Red Sea port city of Hodeidah, “where the bulk of the humanitarian aid enters Yemen,” noted Medea Benjamin, co-founder of anti-war organization CodePink.

“Further escalation of the war in Yemen, particularly an offensive to seize Hodeidah from the Houthi rebels, will mean even more death and hunger for the Yemeni people,” Benjamin wrote at Common Dreams on Friday.

“Trump should not use this trip to support Saudi Arabia’s aggressive agenda, aggravate Sunni-Shia tensions, and further enrich U.S. weapons makers,” she added. “Instead, he should put a halt to weapons sales and press the Saudis to sit down with Iran and other regional players to find a political solution to the devastating regional conflicts, starting with Yemen.”