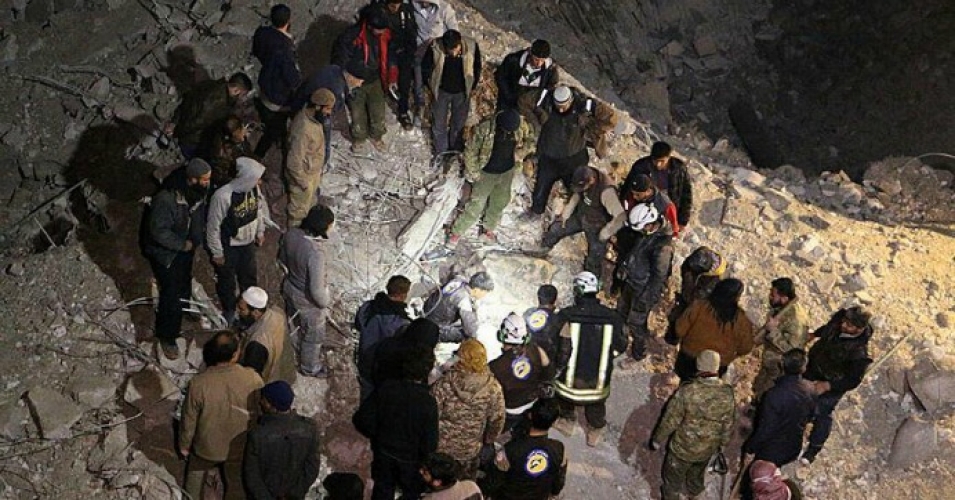 Scores of civilians, including more than 30 children, have been killed in recent days as an escalated air assault led by the United States continues in eastern Syria despite warnings from the United Nations over the careless and indiscriminate attacks.

An early morning airstrike in the town of Mayadeen on Friday killed more than “80 relatives of Islamic State (ISIS) group fighters,” the Syrian Observatory for Human Rights told AFP. According to Rami Abdel Rahman, head of the monitoring group, this toll “includes 33 children. They were families seeking refuge in the town’s municipal building.”

Friday’s strike followed a coalition raid Thursday night during which 37 additional civilians were killed, including 13 children, according to the U.K.-based group. Coalition airstrikes on Wednesday killed another 15.

It is worth noting that before becoming president, Donald Trump had advocated for “tak[ing] out the families” of terrorists.

The latest assault comes amid the deadliest month for Syrian civilians since the U.S.-led coalition began its bombing campaign in September 2014. On Tuesday, the Observatory reported that 235 civilians, including 44 children and 36 women, were killed in U.S. airstrikes from April 23 to May 23.

On Friday, the United Nations High Commissioner for Human Rights Zeid Ra’ad Al Hussein issued a statement on the rising civilian death toll, saying that “just because [ISIS] holds an area does not mean less care can be taken. Civilians should always be protected, whether they are in areas controlled by [ISIS] or by any other party.”

“The same civilians who are suffering indiscriminate shelling and summary executions by [ISIS], are also falling victim to the escalating airstrikes, particularly in the northeastern governorates of Al-Raqqa and Deir-ez-Zor,” Zeid continued, refering to the May 14 strike that killed 23 farm workers in a rural area of Raqqa province and one the following day that is said to have killed at least 59 civilians.

The commissioner urged “all States’ air forces operating in the country to take much greater care to distinguish between legitimate military targets and civilians. All parties to the conflict must uphold their obligation to take every feasible measure to spare the civilian population from the effects of the armed conflict.”

“Unfortunately,” he said, “scant attention is being paid by the outside world to the appalling predicament of the civilians trapped in these areas.”

Appearing on Democracy Now! on Thursday, Intercept journalist Glenn Greenwald discussed the discrepancy between how western victims such as those killed in this week’s bombing in Manchester, U.K. and non-western civilian casualties are discussed in the media.

We keep it so abstract. We usually just hear 14 people died. The Pentagon claims that it’s militants and terrorists. It’s left at that. At best, we hear they finally acknowledge four civilians are killed, but it’s kept very ethereal, very distant and abstract.

[…] And if there was just some attention paid to telling the stories of the victims of our own government’s violence, I think there would be a radical shift in how we perceive of ourselves, the role we play in the world and who bears blame in this conflict.

Notably, the suspected Manchester suicide bomber, Salman Abedi, is believed to have carried out the attack in retaliation for those killed by the U.S. military in Syria and the greater Middle East. “He saw the explosives America drops on children in Syria, and he wanted revenge,” Abedi’s sister told reporters Thursday.

Further, this uptick in Syrian civilian casualties comes as the U.S. is reportedly taking steps to decrease transparency and limit the information released about such deaths.

Airwars journalist Samuel Oakford reported Friday that U.S. allies in the coalition fight against ISIS have been found responsible for some 80 civilian deaths. However, none of the dozen partners have admitted to the killings and, in fact, have reached an agreement with the U.S. that no coalition member will release details of civilian deaths.

For over a year, some senior U.S. officials have been frustrated that their allies have not stepped forward to admit their own errors. U.S. forces first admitted their own civilian casualties in May 2015, and have so far confirmed their responsibility for 377 non-combatant fatalities—including 105 killed in a single Mosul incident in March.

Efforts by U.S. officials to release information about casualties caused by their partner nations, however, have come at a cost. As the result of a deal struck with its coalition partners, the United States will in future no longer confirm its own responsibility for specific civilian casualties incidents either—a move toward greater secrecy that could deprive victims’ families of any avenue to seek justice or compensation for those deaths.

Rarely discussed, but lack of transparency in use of force undercuts US goals of statebuilding and rule of law https://t.co/g1euY0iaty