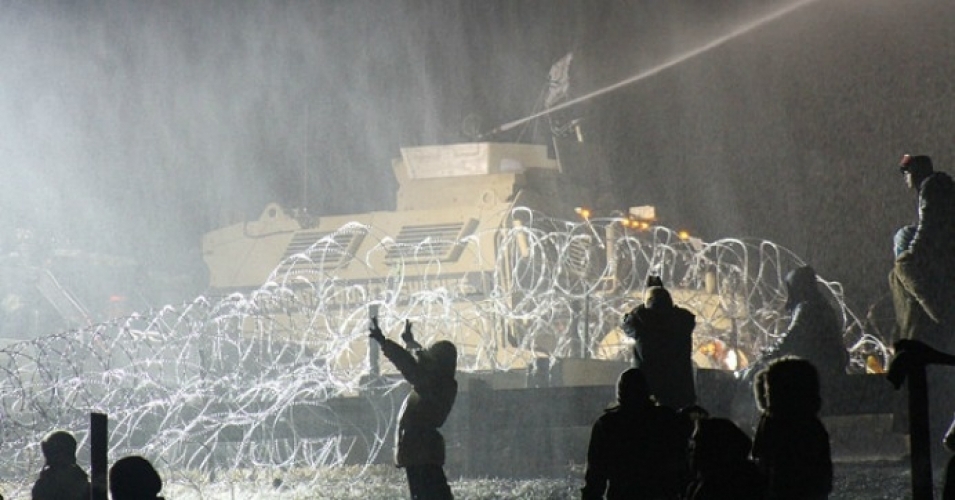 Now that the pipeline is operational and already leaking, internal documents obtained by The Intercept and reported on Saturday reveal the deep collusion between local police forces, the pipeline company, and defense contractors as they executed “military-style counterterrorism measures” to suppress the water protectors.

TigerSwan, described as a “shadowy international mercenary and security firm” that “originated as a U.S. military and State Department contractor helping to execute the global war on terror,” was hired by Energy Transfer Partners to spearhead “a multifaceted private security operation characterized by sweeping and invasive surveillance of protesters,” The Intercept wrote.

Reportedly, one of TigerSwan’s contractors leaked 100 internal documents to reporters Alleen Brown, Will Parrish, and Alice Speri, who were able to assemble roughly 1,000 more via public records requests.

The trove paints a damning picture of the police response to the Indigenous-led effort to block construction of the pipeline on sacred, treaty land and is a shocking example of how anti-terrorist rhetoric and tactics could be applied to any uprising the government would like to suppress.

According to the reporting:

Internal TigerSwan communications describe the movement as “an ideologically driven insurgency with a strong religious component” and compare the anti-pipeline water protectors to jihadist fighters. One report, dated February 27, 2017, states that since the movement “generally followed the jihadist insurgency model while active, we can expect the individuals who fought for and supported it to follow a post-insurgency model after its collapse.” Drawing comparisons with post-Soviet Afghanistan, the report warns, “While we can expect to see the continued spread of the anti-DAPL diaspora…aggressive intelligence preparation of the battlefield and active coordination between intelligence and security elements are now a proven method of defeating pipeline insurgencies.”

“As policing continues to be militarized and state legislatures around the country pass laws criminalizing protest,” Brown, Parrish, and Speri write, “the fact that a private security firm retained by a Fortune 500 oil and gas company coordinated its efforts with local, state, and federal law enforcement to undermine the protest movement has profoundly anti-democratic implications.”

Indeed, in the wake of the 2016 election, Republican legislatures in at least 19 states introduced various anti-protest laws, many with a deliberate nod to the uprising in North Dakota.

Not only that, but Morton County Sheriff Kyle Kirchmeier, who oversaw the police response to the DAPL resistance, has been advising other law enforcement on how to deal with protests and demonstrations.

Indeed, the documents reportedly show that Energy Transfer Partners has “continued to retain TigerSwan,” despite the fact that the anti-DAPL camps have disbanded. The security firm continues to produce so-called situation reports that document “the threat of growing activism around other pipeline projects across the country.” These reports include “intelligence on upcoming protests,” information gleaned from social media, and “extensive evidence of aerial surveillance and radio eavesdropping, as well as infiltration of camps and activist circles.”

In some cases, persons “of interest” were even tracked when they crossed over state lines.

What’s more, the documents obtained via open records requests include “communications among agents from the FBI, the Department of Homeland Security, the U.S. Justice Department, the Marshals Service, and the Bureau of Indian Affairs, as well as state and local police,” that reveals interagency collusion and information sharing on the anti-DAPL protesters.

Read the extensive reporting and several published documents at The Intercept.