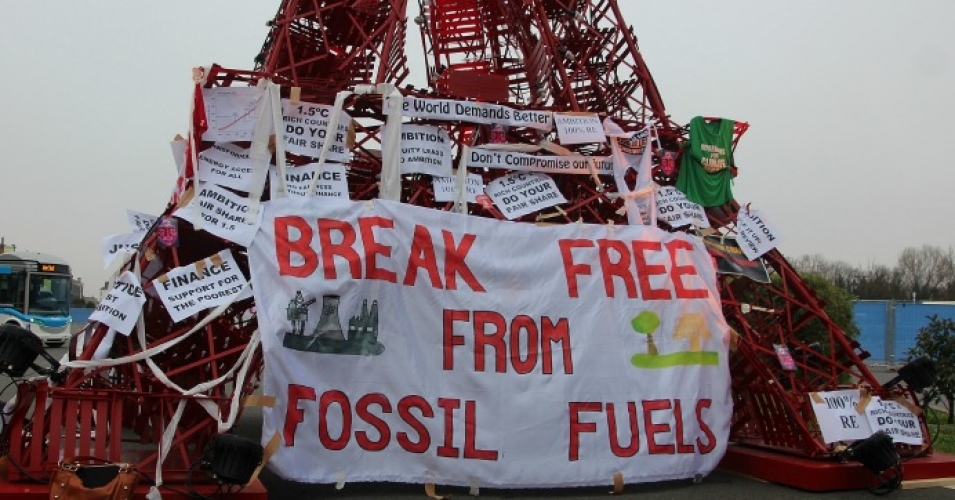 If “large fossil fuel emissions are allowed to continue[…] the burden placed on young people and future generations may become too heavy to bear,” the researchers write. (Photo: Takver/flickr/cc)

The “shit is hitting is the fan,” said noted climate scientist James Hansen, countering “this narrative out there…that we have turned the corner on dealing with the climate problem.”

Hansen is lead author of a new study that warns that there “is no time to delay” on climate change efforts and argues that they must go beyond just slashing emissions of CO2—”the dominant control knob on global temperature”—to extracting CO2 from the air, or “negative emissions.”

The team of international researchers writes that “the world has overshot appropriate targets”—a conclusion that “is sufficiently grim to compel us to point out that pathways to rapid emission reductions are feasible.”

The goal, they write, should be getting atmospheric CO2 reduced to less than 350 parts per million (ppm), as that would lead to global average temperatures decreasing to about 1 degree Celsius of warming relative to pre-industrial levels later this century. The Paris climate accord, in contrast, has a goal of keeping global average temperature increase to under 2 degrees Celsius, and an aspiration 1.5 degrees of warming. But, they argue, the problem with those

targets is that they are far above the Holocene [the epoch that began after the last Ice Age] temperature range. If such temperature levels are allowed to long exist they will spur “slow” amplifying feed-backs, which have potential to run out of humanity’s control. The most threatening slow feedback likely is ice sheet melt and consequent significant sea level rise, as occurred in the Eemian [the prior interglacial period], but there are other risks in pushing the climate system far out of its Holocene range.

For a safer scenario that limits irreversible climate impacts, what needs to happen is a “rapid phase-down of fossil fuel emissions,” bringing the rate of emissions right away to 6 percent a year, alongside reforestation and agricultural practices that draw carbon from the atmosphere into the soil.

On the other hand, if CO2 emissions grow at a rate of 2 percent a year—that’s a slower rate than the 2.6 percent they grew each year from 2000 to 2015—it could result in a costly scenario. It could rack up a CO2 extraction bill of $535 trillion by 2100—an “extraordinary cost” that “suggest[s] that, rather than the world being able to buy its way out of climate change, continued high emissions would likely force humanity to live with climate change running out of control with all the consequences that would entail,” the researchers write.

In other words, “if large fossil fuel emissions are allowed to continue, the scale and cost of industrial CO2 extraction, occurring in conjunction with a deteriorating climate and costly dislocations, may become unmanageable. Simply put, the burden placed on young people and future generations may become too heavy to bear.”

The burden on young people is a key part of the new report, as it is meant to bolster a case brought by a group of youth who argue that the U.S. government has violated their constitutional rights by failing to act on climate change. Hansen’s granddaughter Sophie Kivlehan is among the plaintiffs.

“It is apparent that governments are leaving this problem on the shoulders of young people. This will not be easy or inexpensive,” Hansen said in a press statement.

“We wanted to quantify the burden that is being left for young people, to support not only the legal case against the U.S. government, but also many other cases that can be brought against other governments,” he said.

Of the case, Juliana v. United States, historian Jeremy Brecher has written that it “is shaping up to be not only a historic trial of the culpability of the U.S. government for destruction of the earth’s climate, but of the power of courts to protect our rights.

“We can and must support the efforts of the climate kids both in court and in every arena where decisions affecting the future of our climate are made,” Brecher wrote.

The peer-reviewed study was published Tuesday in Earth System Dynamics, a journal of the European Geosciences Union.