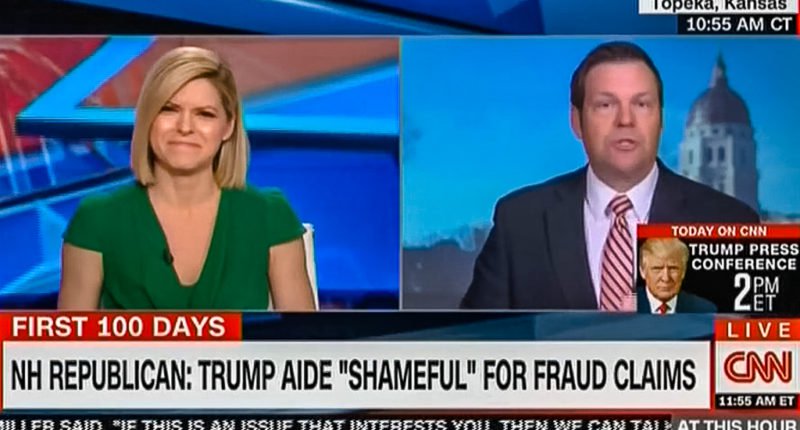 “Our election process must be secure, fair, and transparent,” said Dale Ho, director of the ACLU’s Voting Rights Project, but Trump is using his “sham commission to spread the lie of rampant fraud as a Trojan Horse for voter suppression.”

The meeting comes on the heels of a widely-panned Breitbart column by the commission’s vice chair, Kansas Secretary of State Kris Kobach, who claimed that thousands of “out-of-staters” voted fraudulently in New Hampshire during the 2016 election.

Kobach argued the fraud was so rampant that it altered the outcome of the state’s Senate race—and may have even been the decisive factor in former Secretary of State Hillary Clinton’s New Hampshire victory.

But as Ari Berman and Pema Levy point out in Mother Jones, “there’s a far simpler and less nefarious explanation for what happened: It’s legal to use an out-of-state driver’s license as ID at the polls in New Hampshire.”

“The people who did so didn’t drive in New Hampshire or own a car there or plan to reside permanently in the state,” Berman and Levy added. “College students quickly came forward to say they’d voted legitimately using out-of-state licenses. (The places where out-of-state licenses were used most frequently were all college towns.) The fraud Kobach cited was nothing of the sort.”

Brian Tashman, political researcher and strategist for the ACLU, argues that Kobach’s wild claims ahead of the commission’s second official meeting are evidence that he is “getting desperate” after failing in his failed attempts to obtain state voter data.

But, Tashman concludes, Kobach has made clear that he is more than willing to overreach in pursuit of his agenda.

“Kobach has prosecuted people for making honest mistakes, all as part of his quest to justify voter suppression,” Tashman notes. “It’s dirty work, but someone like Kobach is more than eager to do it.”

Making matters worse, many observed, is the slate of speakers set to address the panel on Tuesday.

Drawing much of the ire was John Lott, a gun policy researcher who wrote what Berman and Levy call “the bible of the gun lobby.” Lott will present his argument for requiring prospective voters to pass a background check.

31 cases of voter fraud since 2000: background checks for voting! https://t.co/FSmsoPKBzS

Joining Lott will be an all-white-male group of presenters making their case for policies that disproportionately harm minorities.

“This commission meeting is a farce. It is astounding that this Commission has lined up a full day of speakers who provide no racial, gender, or ideological diversity,” Kristen Clarke, president and executive director of the Lawyers’ Committee for Civil Rights Under Law, said in a statement on Monday. “In so doing, the commission has made clear that they do not represent the diverse voices of Americans who care about voting but is instead focused on providing a platform for the extremist views of those who support voter suppression.”