“Our politicians could be heroes of these times, if they start working with nations rather than against nations.” 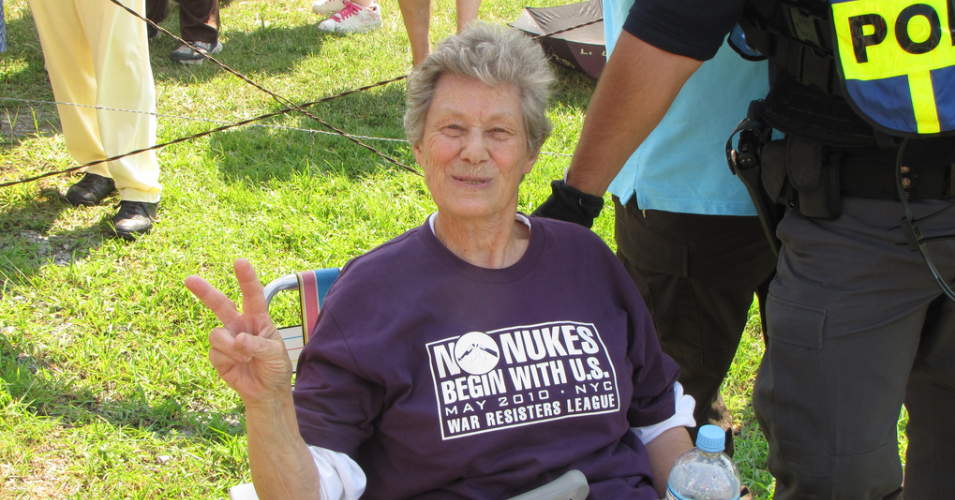 Sister Ardeth Platte, one of the nuns staging anti-nuclear weapons protests at two Colorado Air Force Bases this week, was arrested in 2000 and 2002 for similar actions. (Photo: Frank Cordaro/Flickr/cc)

Speaking out against the United States’ decision to forego last month’s United Nations treaty prohibiting the use and development of atomic weapons, two Catholic nuns on Monday will perform their latest in a long series of anti-nuclear protests.

Sister Ardeth Platte and Sister Carol Gilbert plan to present the Treaty on the Prohibition of Nuclear Weapons, signed by 53 countries, to officials at the Peterson Air Force Base in Colorado Springs, delivering the message that the U.S. must join with other nations to reach worldwide nuclear disarmament.

“We’re coming as peacemakers and peace advocates, to teach and show our concern,” Platte said in an interview with the Denver Post. “Our politicians could be heroes of these times, if they start working with nations rather than against nations.”

The U.S. was one of several countries with nuclear capability that did not sign the agreement. North Korea, Russia, and the United Kingdom were among the other nations that refused to take part in negotiations—which Platte and Gilbert say too many Americans don’t even know took place.

“We want the citizens of Colorado to know about this treaty,” Gilbert told the Post. “The treaty would make nuclear weapons illegal.”

The treaty was signed amid growing tensions between President Donald Trump and North Korean leader Kim Jong-un, who has tested several intercontinental ballistic missiles since July, launching them into the Pacific Ocean over Japan.

Last week, following weeks of antagonizing Kim using his Twitter account and in impromptu comments about unleashing “fire and fury” on the isolated country, Trump cryptically told reporters the U.S. could be currently be in “the calm before the storm.”

“We’re in an extremely dangerous time,” said Platte. “A strike could be launched from Colorado within 15 minutes and go 7,000 miles to its target within half an hour. It would be total devastation.”

The two nuns will also visit Schriever Air Force Base on Tuesday to deliver the same message, and ahead of their visit to Peterson will hold a vigil at a nuclear missile silo in Weld County, Colorado.

Gilbert and Platte have spent decades demanding an end to nuclear proliferation by countries including the U.S. Fifteen years ago they were convicted of sabotage for pouring blood on a missile stored in a silo in Weld County. They’ve also been arrested numerous times for staging peaceful protests at military bases like the ones they’ve planned for this week.

The pair say that the existence of the treaty signed by more than 50 countries has given them hope.

“I’ve been working on this issue for 50 years, and this is the greatest hope I’ve had,” Platte told the Post. “We finally have a tool, a treaty that declares criminality to the possession and threat of using nuclear weapons.”

This work is licensed under a Creative Commons Attribution-Share Alike 3.0 License.
Related Story: