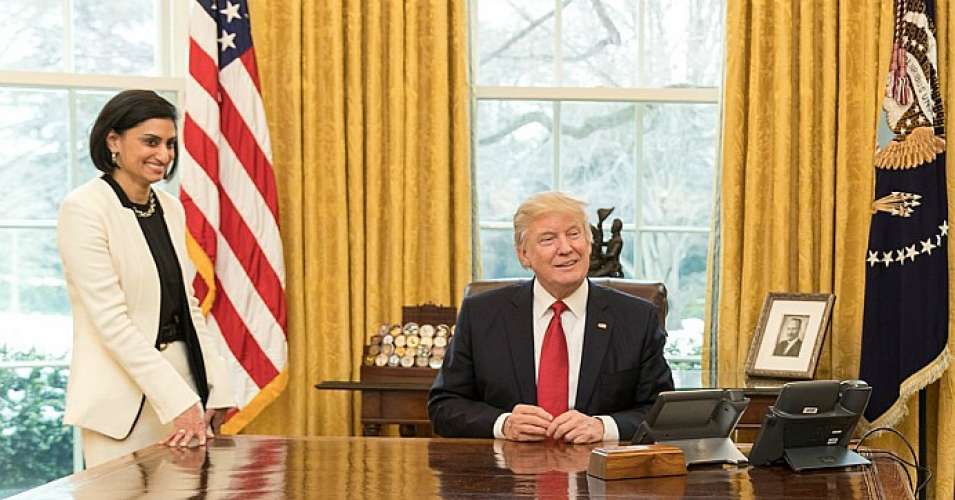 Seema Verma, administrator of the Centers for Medicare and Medicaid Services, and U.S. President Donald Trump met in March 2017 in the Oval Office of the White House. (Photo: Shealah Craighead/White House)

In a move called “twisted” and “absolutely awful” by healthcare experts, Centers for Medicare and Medicaid Services (CMS) administrator Seema Verma said Tuesday that the Trump administration will encourage states to force work requirements on people enrolled in Medicaid.

In a speech to the National Association of Medicaid Directors, Verma explained her approach to managing CMS, which emphasizes deregulation and transferring more control to the states. Verma vowed to fast-track approvals of states’ proposals for amending how they implement Medicaid and denounced the Obama administration’s rejection of work requirements for Medicaid recipients, promising to “approve proposals that promote community engagement activities,” which she defined as “working, volunteering, going to school, or obtaining job training.”

“Believing that community engagement requirements do not support or promote the objectives of Medicaid is a tragic example of the soft bigotry of low expectations consistently espoused by the prior administration,” she said. “Those days are over.”

New York Medicaid director Jason Helgerson said he was “shocked” and “appalled” by Verma’s “absolutey awful” speech. He told the Washington Post it was “completely reprehensible” for Verma to use the phrase “soft bigotry” to describe state programs that don’t impose extra requirements on low-income people who seek health insurance coverage through Medicaid.

Judy Solomon, vice president for health policy at the Center on Budget and Policy Priorities, called the statement “twisted,” and emphasized that Medicaid’s purpose is to enable low-income individuals to access healthcare.

This statement is so twisted as is rationale that tying #Medicaid eligibility to work promotes its objectives. It’s a healthcare program. https://t.co/oUyVeyD3w4

Jessica Schubel, a senior advisor for CMS during the Obama administration, similarly said forcing worker requirements for Medicaid eligibility contradicts the program’s purpose. “I’m not sure how denying coverage for people based on their inability to find work really meets the objective of providing health insurance to low-income individuals,” Schubel told Talking Points Memo.

Critics were also quick to point out that the majority of those who would be primarily targeted by the new requirements are already working. According to a Kaiser Family Foundation (KFF) analysis published in February, among able-bodied individuals who were under the age of 65 and enrolled in Medicaid in 2015, 59 percent were working, and 78 percent were in families with at least one worker.

In an op-ed published last week, Solomon issued warnings about the waivers and “other changes in Medicaid policy that will create barriers to health coverage and care, singling out the poor and low-income adults who became eligible under the expansion” of Medicaid under the Affordable Care Act. In addition to eligibility requirements based on employment or community service, Solomon highlighted that states have submitted waivers to:

“In virtually every case, these proposals would result in fewer people being covered with the waiver than without it, which is inconsistent with Medicaid’s basic objectives. This is why the federal government has never allowed these departures from Medicaid rules,” Solomon wrote, noting that “the Trump administration’s continued hostility to the Medicaid expansion suggests that many of these proposals will now receive approval.”

Talking Points Memo‘s Alice Ollstein outlined how the criteria for Medicaid waivers under the Trump administration differs from that of his predecessor. Through state-submitted waivers, the Obama administration sought to “increase access to, stabilize, and strengthen providers and provider networks,” increase efficiency and quality of care, and improve health outcomes among those treated.

The new criteria under Trump, meanwhile, employs deceptive language—dripping with “personal responsibility” euphemisms and tropes—which states can now use to justify work requirements that will cut off health insurance coverage for some of the poorest Americans.

This work is licensed under a Creative Commons Attribution-Share Alike 3.0 License
Editorial note: Last night, Maine became the first state where the voters chose via referendum to expand Medicaid in the state. The vote wasn’t close by any means; 59% voted for the expansion. However, Maine’s governor Paul LePage announced that he wouldn’t follow the voters’ wishes.  This isn’t too surprising, as he had previously vetoed the state legislature’s passing of the expansion.