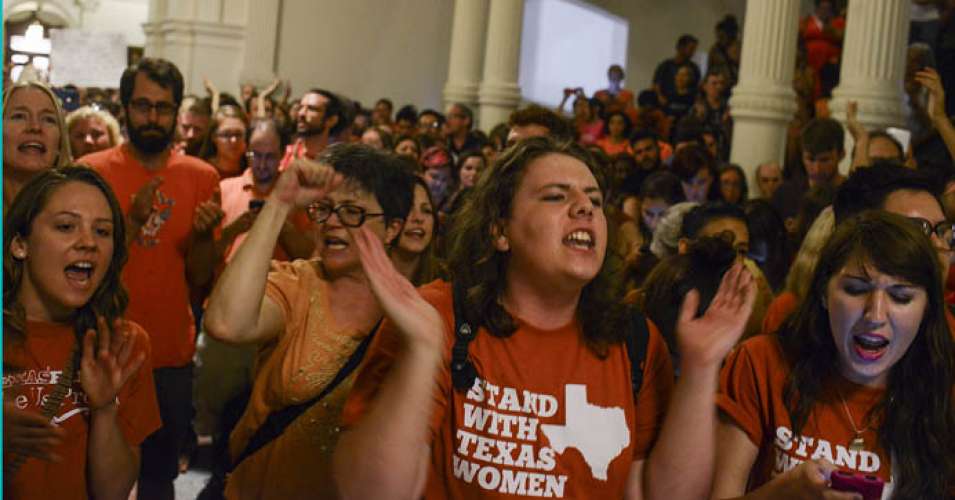 U.S. District Judge Lee Yeakel issued a permanent injunction on Senate Bill 8, which sought to ban dilation and evacuation (D&E) procedures after 15 weeks, despite that it’s among the most common types of abortion procedures for women in their second trimester of pregnancy and amid warnings that it would force pregnant women and providers to turn to more costly and risky options. Texas, a hotbed for anti-choice measures, already bars women from having an abortion after 20 weeks.

“Lawmakers in Texas have been trying for years to ban abortion by any means necessary. This law is the same underhanded agenda in a different package, and it’s women who get hurt in the process,” said Planned Parenthood president Cecile Richards, after the ruling. “We’re grateful today’s decision will safeguard our patients access to safe, legal abortion in Texas and every person’s right to make their own pregnancy decisions.”

“Facts and the rule of law once again prevailed over an unrelenting and coordinated political agenda against American women’s health and well-being,” said Nancy Northup, president and CEO of the Center for Reproductive Rights, which had led the legal challenge against the law. “The court’s decision once again makes clear that politicians cannot force their way into private medical decisions that should stay between patients and physicians. Access to vital reproductive health services should not depend on a woman’s zip code.”

“This is a huge win for Texas women and families,” said Amy Hagstrom Miller president and CEO of Whole Woman’s Health, which famously fought the state’s admitting privileges and facilities requirements laws that were struck down by the U.S. Supreme Court last year.

“I knew that after our historic Whole Woman’s Health decision last year, we would have to continue to fight. The pattern of incessant and dangerous attacks on women’s healthcare has not stopped,” Hagstrom Miller added, calling the ruling “just another step in ensuring that all Texans are given the dignity and respect they deserve to make their own healthcare decisions.”

Reproductive rights advocates and abortion providers banded together to challenge the D&E ban in court, successfully arguing that it posed an unconstitutional and undue burden on women, as The Austin Chronicle reports:

During a five-day trial in Yeakel’s courtroom earlier this month, Whole Woman’s Health and Planned Parenthood, represented by the Center for Reproductive Rights, argued the law poses “grave harm” and an undue burden on women and would lead to invasive and unnecessary and risky procedures on abortion patients. Meanwhile, state attorneys claimed the law ensures dignity for fetal life—or in the words of their boss, Attorney General Ken Paxton—an “unborn child.” The state provided no concrete evidence the law would protect the health and safety of Texas women.

Yeakel largely agreed with plaintiffs, writing in his ruling that the law would force women seeking second-trimester abortion at 15 weeks to undergo “medically unnecessary and invasive” procedures with additional risks of complications, which “substantially burdens” their right to choose abortion care. Medical testimony given at trial convinced Yeakel that fetal demise as an alternative to D&E offers “no additional medical benefit” to a woman. Even if the law alone does not create an undue burden, writes the judge, its interaction with other Texas laws (like the 24-hour pre-abortion sonogram requirement) will push women seeking abortion “above the undue threshold.”

Although the judge wrote in his ruling (pdf) that the state has a “valid interest in promoting respect for the life of the unborn,” Yeakel ultimately concluded that such interest is not “sufficient to justify such a substantial obstacle to the constitutionally protected right of a woman to terminate a pregnancy.” The law, the judge added, represented an “inappropriate use of the state’s regulatory power over the medical profession to bar certain medical procedures.”

Pro-choice advocates celebrated the the victory on Wednesday, but the battle for reproductive rights in Texas is far from over. “Shortly after the ruling,” the Chroniclereports, “Paxton said the state will appeal Yeakel’s ruling to the conservative 5th Circuit Court of Appeals, the perennial path for Texas anti-choice laws.”