Our most admired, most important Person of the Year for 2017 goes to… 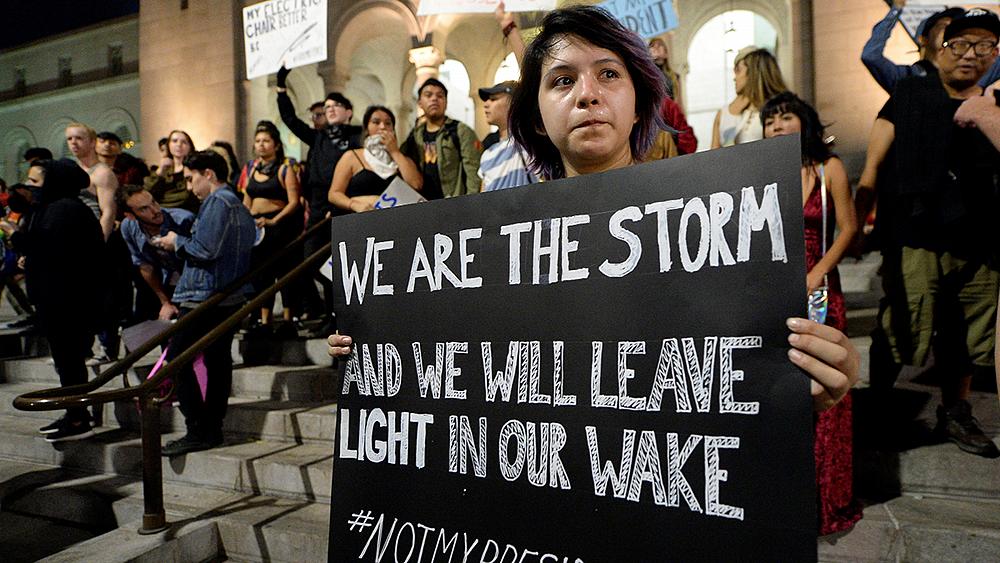 2017 is a year no one will miss much. We struggled through the year with the “deer in the headlights” syndrome across our populace; so much so that “not normal” became expected, and the expected became obscure.

But what did we find when we looked at the year to decide who was the biggest influence on us, who did we turn to for hope and inspiration in our darkest moments? Our collective minds turn to the voice of the resistance – every person, team, organization, group and crowd that forged a line and said “ENOUGH!” in one great shout.

It started on January 20; the day of the inauguration. In Washington, DC, hundreds of J20 protestors were kettled and arrested. Setting a new precedent, they were all charged with mass felonies carrying prison terms. Most of those arrested are still awaiting trial, which has completely disrupted the lives of those charged. Trials continue on the remaining charged, the first 6 were acquitted. It appeared to Americans that a crackdown on dissent was issued on Day 1 of Trump’s presidency. 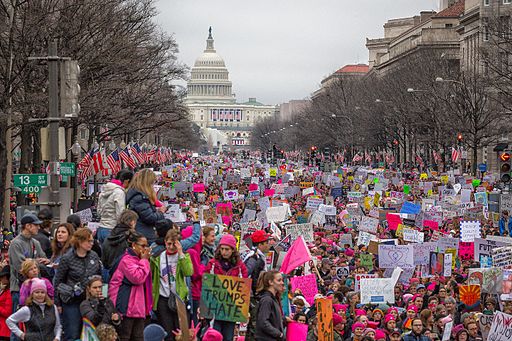 The following day, we witnessed the largest Women’s March in Washington, DC’s history, protesting the election of a man accused of assault, harassment and rape, to the highest office; one who was on record as saying “Grab ’em by the pu**y” in reference to how to treat women. Washington, DC was not the only place women marched that day. Solidarity marches occurred in cities across the United States and around the world. Women were furious and outraged, and that rage was left unaddressed.

It has long been a common expression, that “Hell hath no fury like that of a woman scorned.” You can’t anger 51% of the nation’s population and expect them to “Shut up and listen.” They didn’t. One by one, then in droves, women came forward and finally released the truth about how systemic this treatment was throughout all segments of American life. Every one of these women’s stories grew into something larger than any of them were individually, as they banded together and said “#MeToo.” By the end of the year, even Time Magazine had noticed.

When Trump took office, the nation was riveted by the standoff at Standing Rock, where Native Americans and their allies were staging a resistance to the construction of a pipeline that endangered the water on their land and crossed into their ancestral burial grounds. It didn’t take long for Trump to force an end to the standoff and overlook their rights and sovereign territory as well as signed treaties, to accomplish what he thought would be an end to the dissent. It backfired. The Standing Rock Resistance spread to other fossil fuel building projects and benefited from the energy of the environmentalists and other supporters.

When Trump made the announcement that the United States was withdrawing from the Paris Climate Accord, we watched as municipalities and states passed laws and regulations setting their own standards at a higher rate of effective energy use than if the Paris Accord had been followed. While the president mocked global warming, we watched the weather extremes increase in a year which was one of the worst hurricane seasons in history, and the advancement of mass extinctions of species across the globe. Rising temperatures and alkalinity in the world’s oceans will inevitably collapse the food chain, resulting in depletion of the world’s fisheries and ocean life. Trump decided to repeal the regulations that prohibit development in flood zones as the ice caps continue to melt at unprecedented levels. He also opened two National Monuments off the west coast for drilling operations, destroying protected areas that support ocean life. Still not enough, the tax reform bill included opening the ANWR region of Alaska to fossil fuel drilling and heavy metal mining, and repeals of the safety regulations imposed after Deep Water Horizon’s disastrous accident.

Upon taking office, Trump said the Affordable Care Act (ACA  i.e.: ObamaCare) legislation would be repealed. After over 70 repeal votes had gone through the House, it finally made it to a vote in the Senate. Americans went with it. They showed up in wheelchairs and walkers, protesting that they had a right to live and what was being considered would literally kill them. We watched news footage of these Americans being arrested and dragged from the halls of Congress while the vote nonchalantly ignored their pleas to stop the repeal. Congress members began avoiding town hall meetings and places where constituents wanted to hold them accountable. Overall, the support for the ACA was overwhelming when Trump thought it would be an easy victory in his pursuit to undo anything accomplished by his predecessor. 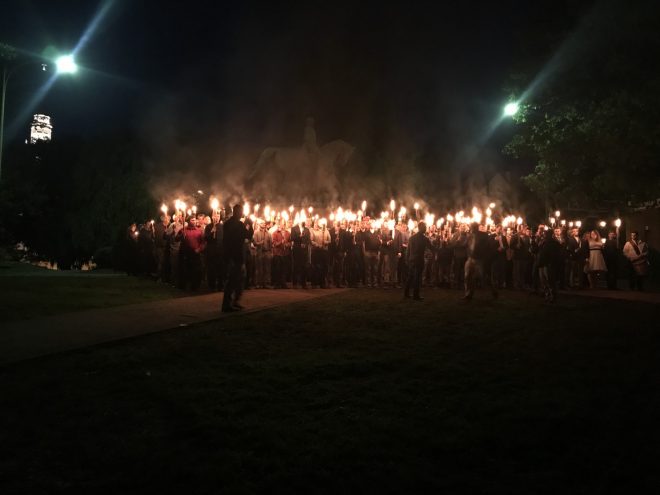 Most presidents have found a way to unite our country. In times of disaster, they lead us to recovery and resilience. In times of sorrow, they lead us to hope and healing. Never before in our lifetimes have we had a president that creates deep divisions and amplifies hyperbole that exacerbates racism. As part of a continued movement in southern states to remove civil war monuments that displayed figures representing oppression to Black Americans, the Charlottesville, VA city council took a vote and then approved removing a statue but also renaming the park where it resided. Protestors came and counter protests sprang up. We watched news footage of White Supremacists marching down streets of an American city in 2017, in what had once been called a “post-racial society.” One of them used his vehicle as a weapon, driving into a group of counter protestors, killing one. Trump came out to say “there were very fine people on both sides,” refusing to quench the rising racial tensions throughout the deep south. 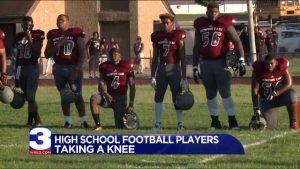 Even Black professional athletes know their community does not receive equal justice under the law. In solidarity, Colin Kaepernick dropped to one knee during the National Anthem on game day. Others joined his protest. Instead of listening to the concerns so the issue could be brought to the forefront, Trump demanded the “Owners” put their Black “dissenters” back in line. Attempts were made to change the message to that of disrespect to veterans, which worked wonderfully on Trump’s supporters and closeted bigots throughout America. Soon high school football teams took the issue to the communities, seeming to understand that all politics are local.

But it wasn’t just Black Americans Trump holds a disdain for. Enacting a Muslim ban under the guise of “National Security,” he barred travel to the US by anyone born or visiting several – but not all – Muslim countries. Protests at airports erupted throughout the country. Children approved to come to the US for life saving medical care were turned away and have since died. Federal judges stepped in to halt the chaos and question the Constitutionality of such a ban. Trump supporters felt empowered to take matters into their own hands and began confronting American Muslims that were going about their daily lives. In Bloomington, Minnesota, a mosque was bombed. Others across the country were also targeted. Muslim shoppers were turned away in stores. Muslim diners were not seated in some restaurants.

In Portland, Oregon, two Muslim women were harassed by Jeremy Christian on the MAX train. As others came to their defense, Christian produced a knife and stabbed one of the teenagers and two defenders to death. He calls himself a “patriot.”

When Hurricane Maria hit Puerto Rico, Trump slowed down relief efforts while feigning his commitment by throwing individual rolls of paper towels at various Americans gathered on the island hoping to hear words promising help from their nation’s leader.

But nothing has been louder than his contempt for Mexicans and anyone with brown skin. Since campaigning, he has promised a border wall of such magnanimous proportions that Congress can not fund it. His policies have destroyed the hopes of hundreds of thousands of Dreamers while ripping infants from the arms of their parents at the border. He has allowed the unconstitutional policies of some immigration personnel of physically restraining young women seeking abortions after being raped. All protections for the Haitians have been removed and they fear deportation. We are now seeing refugees fleeing America to Canada while the United Nations Human Rights Council is considering stepping in on some issues.

This list is an overview of some highlights and does not include them all. To do that, we would need to issue leather bound volumes in a series. Despite Trump’s overblown ego and self importance, he holds a powerful position on the world stage, yet is completely unable to be as important as he wants to be. The most important person of 2017 is every individual, group, organization, and all entities that stood up for democracy and started The Resistance. 2018 promises to be an even better year for opportunity to act to your fullest potential in protests, in social media, in how you choose to spend your money . . . all of it.

Congratulations, Resistance! Now bring some friends and let’s get to work!