“We must act together. And we must act strategically. 2018 is the year the people fight back like never before.” 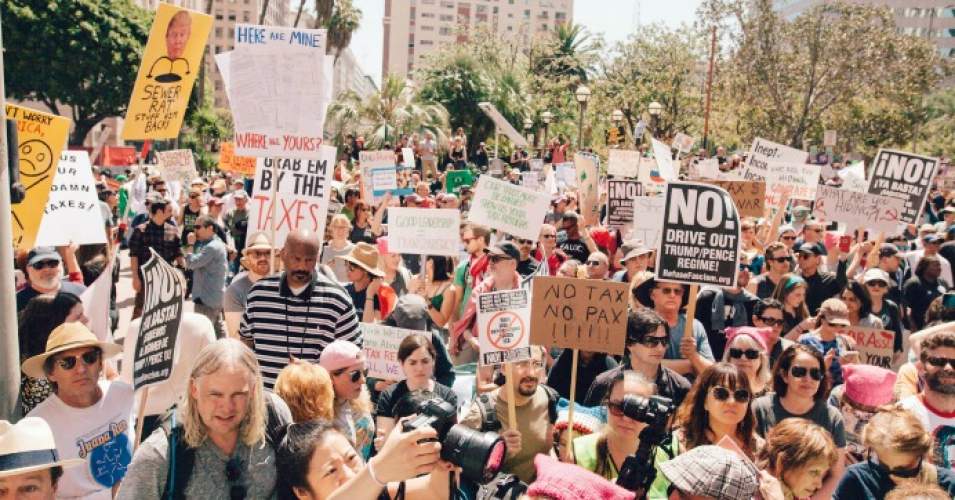 As Republicans and President Donald Trump turn toward the new year with destruction on their minds, Sen. Bernie Sanders (I-Vt.) joined a chorus of voices in expressing the urgent need to reach beyond merely resisting the right’s agenda and articulate an inspiring alternative that will sweep progressives into positions of power.

“Here is a New Year’s resolution I hope you will share with me,” Sanders wrote on Twitter just before midnight on Sunday. “In 2018, we will not only intensify the struggle against Trumpism, we will increase our efforts to spread the progressive vision in every corner of the land.”

While the content of this progressive vision may have seemed unclear a year ago, 2017 saw support for concrete proposals long favored by the left—from single-payer healthcare to a $15 minimum wage—soar in the midst of Republican efforts to strip healthcare from tens of millions of Americans and roll back the rights of workers nationwide.

These right-wing efforts forced progressives to play defense—often successfully—for much of the year, but victories in 2018 will require a rallying cry more galvanizing than “resist” and more expansive than “not Trump,” advocacy groups and progressive lawmakers argued.

“Empty platitudes and anti-Trump rhetoric is not enough to win seats in Congress,” said Rep. Ro Khanna (D-Calif.), who in 2017 emerged as one of the Democratic Party’s most powerful critics of corporate power. “In 2018, Democrats need a bold economic vision which includes investing in education, healthcare, and opportunities for every American.”

If surging membership experienced by grassroots organizations like Our Revolution, Indivisible, and the Democratic Socialists of America—as well as increased engagement in mass demonstrations across the country—is any evidence, the public is eager to hear such an ambitious message. As Common Dreams reported throughout 2017, millions of Americans mobilized from the day Trump took the Oath of Office to the day he signed the GOP’s $1.5 trillion tax cuts into law not just to denounce Trumpism, but also to call for something better.

The untimely loss of @es_snipes reminds us how precious our time us. Learn from Erica: channel your energy into activism.

“The explosion of civic energy from a vast swathe of Americans is simply breathtaking,” observed Ben Wikler, Washington director of MoveOn.org. “It suggests that not only some of Trump’s excesses may yet be curbed—but that a profound renewal may be possible.”

An essential element of achieving this renewal will be both wresting control of Congress from Republicans and replacing them with progressives committed to sweeping changes to a status quo that has produced staggering inequality, persistent poverty, and a political system dominated by corporate cash.

But with 2017 in the rear view, progressives expressed confidence that Trump’s deep unpopularity combined with a widespread desire for progressive, systemic change will be enough to achieve the kind of electoral “tsunami” previewed in Virginia and elsewhere just a few months ago.

“In the face of the most corrupt, conflict-ridden president in American history, we cannot stand by and let corporate executives and political lackeys take over,” the consumer advocacy group Public Citizen declared on Twitter. “We must act together. And we must act strategically. 2018 is the year the people fight back like never before.”

Wikler of MoveOn.org concluded that while “many of the worst” envisioned consequences of the Trump presidency could still come to pass, the growth of grassroots energy over the past year offers a glimpse of an alternative future that is within reach.

“I’m ending this year still with the sense of dread about what’s possible—but also with a great sense of gratitude for the efforts of all of the people working to not only avert disaster, but to build something better,” Wikler wrote. “Here’s to 2018.”