In addition to being called out on his “plutocratic BS,” students in attendance attacked the Treasury chief’s record of foreclosing on tens of thousands of Americans 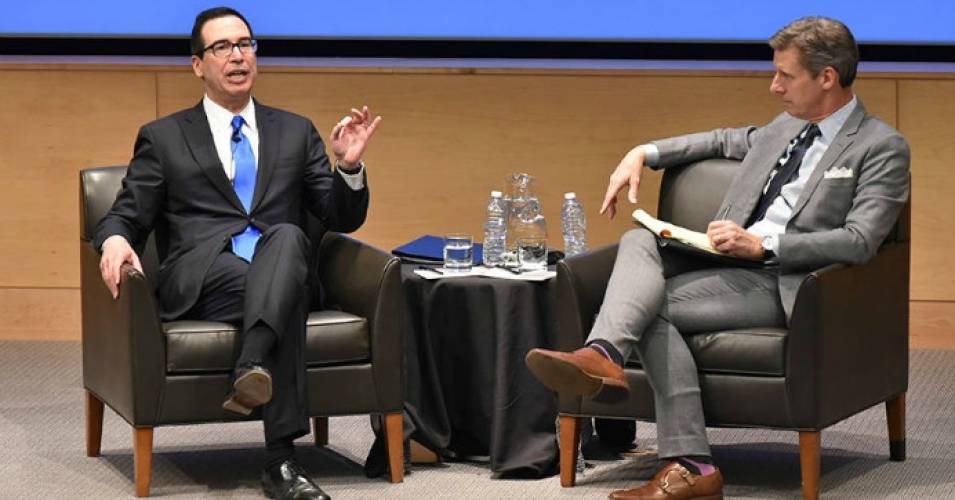 Trump Treasury Secretary and former Goldman Sachs banker Steve Mnuchin isn’t accustomed to facing direct challenges to his wild economic claims or protests over the GOP tax plan he helped craft, and after experiencing both during an event at UCLA’s Burkle Center on Monday, Mnuchin demanded that video of his appearance be suppressed.

According to the Wall Street Journal, Mnuchin complained to the audience that he usually only talks to “people who wanna listen to me speak” after students and others attending the event yelled out “I think you’re full of shit” and denounced the Republican tax bill as an attack on “people who are in poverty.”

After noting that it was his first time speaking at a university, an increasingly “agitated” Mnuchin “stopped the conversation several times, asking the hecklers either to identify themselves or explain what they were protesting,” the Journal reported on Wednesday.

UCLA initially planned to post a full video of the event to its website later this week, but a university spokeswoman told the Journal that Mnuchin “retracted his permission for the Burkle Center to post its video and podcast of yesterday’s event on its website.”

But thanks to students and reporters who were in attendance, a few short videos of the event ultimately emerged on social media.

“Steve Mnuchin being called on his plutocratic BS at UCLA,” student Jacob Woocher wrote on Twitter, attaching a short video of a protester yelling at Mnuchin for working to take Americans’ healthcare. “Enemy of the people! Foreclosed on 36,000 people and helped pass the biggest corporate tax cut in history.”

Steve Mnuchin being called on his plutocratic BS at UCLA. Enemy of the people! Foreclosed on 36,000 people and helped pass the biggest corporate tax cut in history pic.twitter.com/VbrkVEmOM5

When Ryssdal asked Mnuchin how the U.S. economy is going to hit the White House’s three percent growth target when average growth has consistently missed that mark, the Treasury chief accused Ryssdal of “bias” and simply asserted “we fundamentally believe that we will have economic growth.”

Though as of this writing UCLA has not yet posted the full video of the event, an apparent submission to Mnuchin’s demand, Marketplace posted an edited transcript and partial audio of the interview on its website.