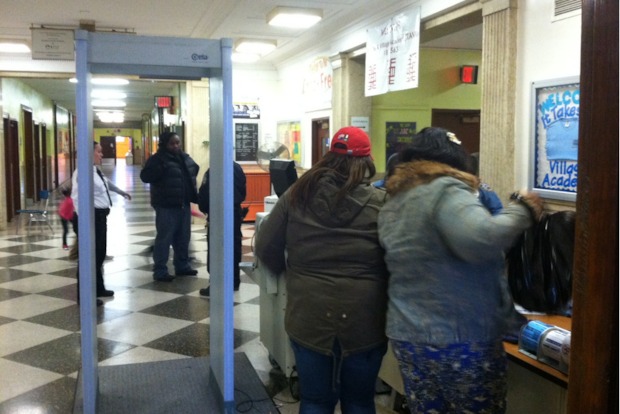 In response to last week’s shooting at a Florida high school, the state’s governor recently released his plans to make schools safer. Many of his proposals will indisputably serve to further turn schools into prisons, a trend that has been on the rise for years.

According to the Tampa Bay Times, Governor Rick Scott’s proposals include:

“— Mandatory active shooter drills in all Florida schools by the fall 2018 semester.

“— New ‘See Something, Say Something’ hotline, website and mobile app.”

While other proposals include increasing mental health services, banning bump stocks, and some restrictions on gun purchases (as well as an explicit refusal to arm teachers), the push toward the heavy policing of schools is evident (Broward County Sheriff Scott Israel now says qualifying deputies will soon carry rifles on school grounds), and it is a natural progression from an ongoing nationwide shift.

From a 2012 paper published in the UCLA Law Review:

“Schools are increasingly allocating funds to become ‘well-policed fortresses,’ hiring police officers to conduct suspicionless searches of student belongings, instituting harsh disciplinary policies resulting in suspensions for relatively trivial offenses like dress code violations and profanity, and using extreme practices like mass strip searches and lock-down drills. While enhanced security measures—including the presence of school police officers—may potentially curb school crime and improve school culture if adequately implemented, these beneficial measures are not the ones that appear to be on the rise.”

“Rather, it is the draconian measures used to target minor rule violations that are expanding,” the paper explained, ultimately “making the education system and the criminal justice system increasingly difficult to distinguish in low-income, nonwhite communities.”

The schools themselves also resemble prisons, with students fenced in behind walls and increased surveillance pervading education institutions around the country, particularly among minority populations.

Unsurprisingly, there are numerous examples of violent, regimented tactics within schools, from the viral video of a police officer aggressively slamming a student in a desk for unruly behavior to a Pennsylvania school officer beating up a student and knocking out his teeth over the suspicion of stealing a phone.

The UCLA Law Review notes another example in which “police officers ….arrested six-year-old Desre’e for having a tantrum in her kindergarten class. Police arrested Desre’e and took her to the county jail, where they photographed her for a mug shot and charged her with one felony and two misdemeanors.”

Other examples include officers arresting a “five-year-old girl for misbehaving in kindergarten, a ten-year-old girl for carrying scissors in her school backpack, and twenty-five middle-school children for participating in a ‘food fight.’”

In San Bernardino, CA, the ACLU of Northern California noted, “[b]etween 2005 and 2014, San Bernardino Unified School District police arrested over 30,000 students—mostly for minor violations such as graffiti and failure to abide by daytime curfews. In one incident, an officer choked, pepper sprayed, and beat a teen for hugging his girlfriend on campus.”

Considering the widespread trend of police officers using excessive force and pulling their guns and tasers on unarmed individuals, it is undoubtedly dangerous to propose “solutions” that require placing them increasingly in control of children.

Further, it is evident that the increased criminalization of schools has a particularly harmful effect on minority students — both psychologically and physically — ultimately strengthening the school-to-prison pipeline and fostering crime in other areas aside from highly-sensationalized mass shootings. As the ACLU pointed out, “[n]ational data revealed that an arrest doubles a high school student’s likelihood to drop out and subsequent court involvement further doubles that risk,” and this probability is all the more increased when police are ever-more present in schools.

Even aside from the blatant transformation of schools to prisons, between the rise in police officers and the imposition of metal detectors and random searches, the school system itself is highly regimented across all demographics.

Compulsory behavior from the pledge of allegiance to asking permission to use the restroom has long created a culture of submission that makes the addition of police officers and increased authoritarian measures seem like a natural progression. This is further reflected in the standardized curriculum, which for years has promoted blind nationalism in the image of the historical Prussian school system, which relied heavily on instilling “patriotism” and love of country in students. This patriotism in the United States characteristically demands obedience, whether in the form of “supporting the troops” and police or standing for the national anthem.

As the gun control debate rages on and much of the country argues over propositions to restrict gun rights, the school policy proposals coming about will undoubtedly work to restrict far broader freedoms — both in mind and body — clamping down on childhood and adolescence with the ever-encroaching police state while ignoring and simultaneously feeding into the United States’ deeply ingrained fetish for violence.