“We make the best equipment in the world, there’s nobody even close, and Saudi Arabia’s buying a lot of this equipment,” the president said. 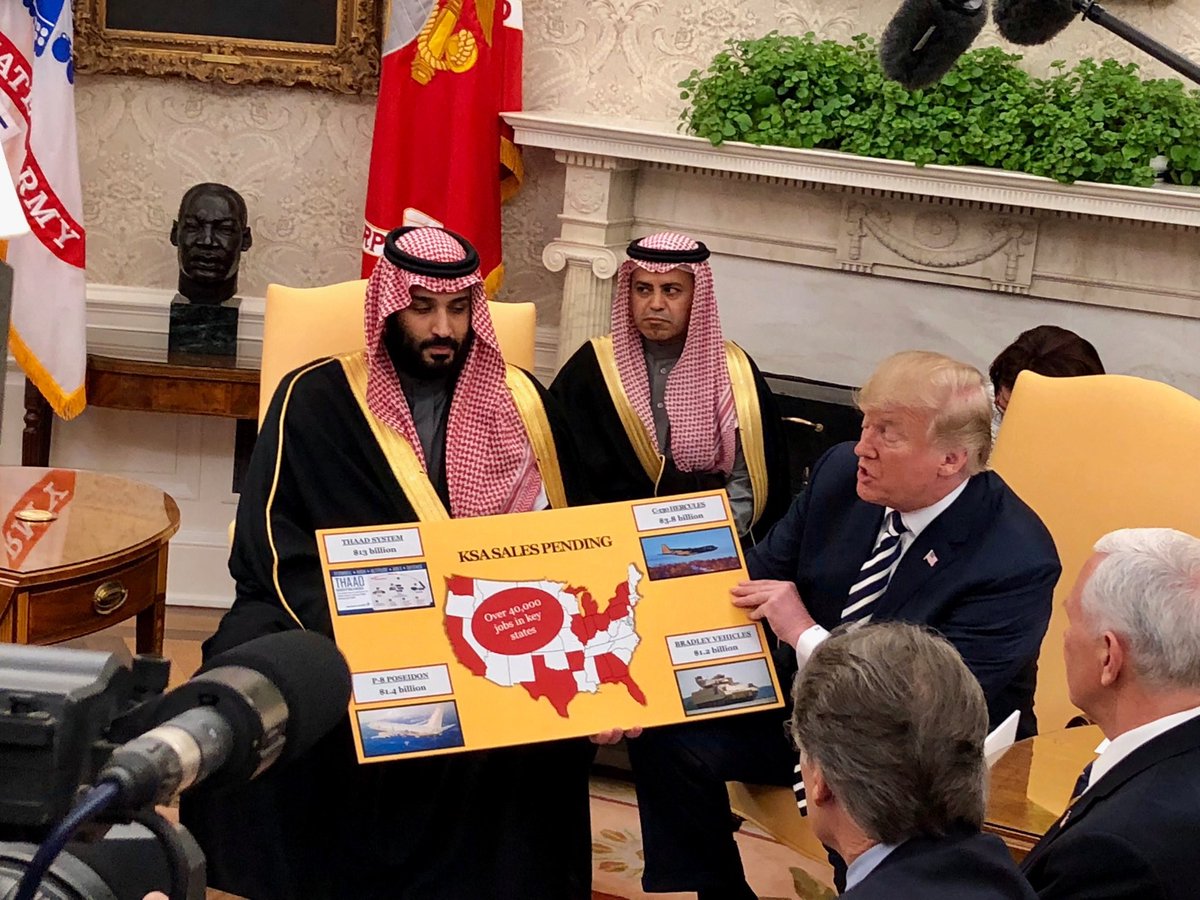 During a meeting with Saudi Crown Prince Mohammed bin Salman (MbS) on Tuesday, President Donald Trump—whose love of “killer graphics” has been well-documented—presented two “middle school project-level” posters to relay his appreciation for the tens of billions of dollars of military equipment the kingdom has bought from the U.S. over the past several months, much of which has been used to slaughter innocents in Yemen.

“We make the best equipment in the world, there’s nobody even close, and Saudi Arabia’s buying a lot of this equipment,” Trump said, using a poster headlined “KSA Sales Pending” to highlight tanks, missile defense systems, and planes the U.S. has agreed to sell to Saudi Arabia over the past year. “We really have a great friendship, a great relationship.”

Watch a video of Trump’s presentation, courtesy of the U.S. State Department:

Wow! They made a fancy elementary level poster so Trump can understand. https://t.co/yHdqRRR1Kx

In a statement following Trump’s meeting with MbS on Tuesday, Raed Jarrar, advocacy director of Middle East North Africa at Amnesty International USA, added: “Arms manufactured in the United States have already been used in strikes against civilians, including one that killed the family of a five-year-old girl. The Trump administration must stop supplying arms to the Saudi-led coalition.”

While Trump lavished MbS with praise inside the White House, peace activists with CodePink gathered outside to denounce the 32-year-old heir to the Saudi throne as a “violent and dangerous” war criminal and call on lawmakers to vote for a Senate resolution that would withdraw American troops from Yemen and end U.S. support for the Saudi-led bombing campaign, which has sparked “the world’s biggest humanitarian crisis.”

While Trump is in the White House meeting with #MohammadBinSalman, we are outside protesting the #SaudiPrince and his visit. #MbS is a war criminal, he is violent and dangerous. Don’t believe the hype about his “reform” #SaudiPrinceNotWelcome https://t.co/pTGyibdG39 pic.twitter.com/xb2JUlDcti

“MbS is really a brutal bully responsible for bombing and starving Yemenis. He’s also gunning for a war with Iran, blaming Iran for the Middle East turmoil,” argued CodePink co-founder Medea Benjamin in an op-ed for Common Dreams on Monday. “The United States should not be arming and abetting this regime.”