One expert estimates that “the real number of potential violations is fourfold.” 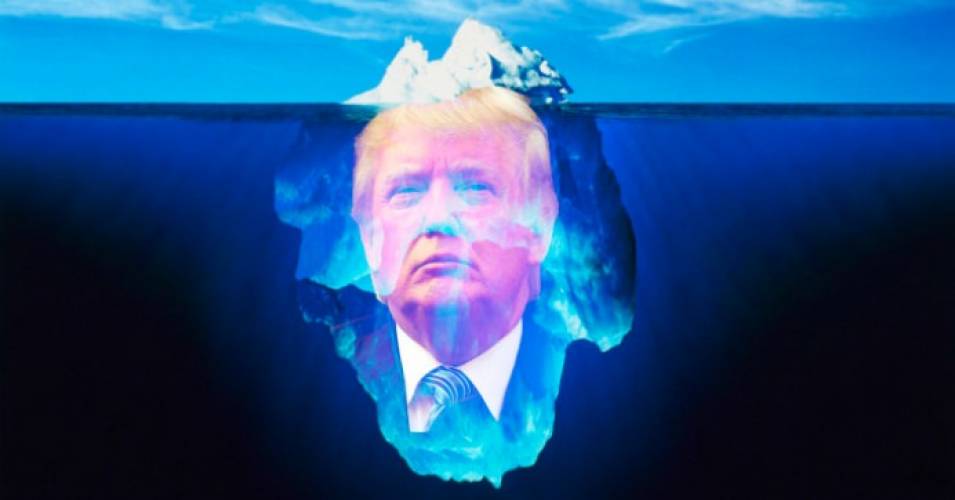 One ethics expert at Public Citizen said Monday, “These 30 apparent violations of Trump’s own ethics rules are only the tip of the iceberg.” (Photo: jackandfred/imgur)

Underscoring allegations that “ethics do not matter in the Trump administration,” a watchdog group on Monday filed complaints against 30 lobbyists whom President Donald Trump has appointed to his administration without ethics rule waivers—and experts warn this is only the “tip of the iceberg,” positing that the actual number of violations is likely much higher.

The advocacy group Public Citizen has identified at least 36 former lobbyists in the administration who are working on issues for which they recently lobbied, and only six of them have waivers from the ethics rule that Trump issued just days after taking office.

Under Executive Order #13770, which the president signed Jan. 28, 2017, anyone who was a registered lobbyist within two years of being appointed to a federal agency is barred for a period of two years from weighing in on any decisions related to issues for which they lobbied, unless they are granted a waiver.

Public Citizen’s complaints (pdf)—which were sent to multiple executive branch agencies and the White House—point to the relevant paragrah of the ethics rule and emphasize that this “critical provision of Trump’s ethics executive order [was] designed to prevent former lobbyists from unduly influencing official actions of the administration solely in the interests of their paying clients.”

Lisa Gilbert, vice president of legislative affairs for Public Citizen, concluded on Monday that “the widespread lack of compliance and enforcement of Trump’s ethics executive order shows that ethics do not matter in the Trump administration.”

Candidate Trump’s campaign trail rallying cry “drain the swamp” was “far more campaign rhetoric than a commitment to ethics,” Gilbert said. “The bottom line is that neither Trump nor his administration take conflicts of interest and ethics seriously.”

Public Citizen’s findings were initially outlined in a June 2017 report (pdf), which asserted that “Trump’s ethics executive order can only be effective if it is properly enforced and actually informs the decisions of executive branch employees,” and noted that the “White House appears to be uninterested in implementing and enforcing the ethics rules.”

Craig Holman, a co-author of the report and lobbyist for Public Citizen’s Congress Watch division, predicted on Monday that “these 30 apparent violations of Trump’s own ethics rules are only the tip of the iceberg.”

“We looked at only a quarter of all presidential appointees because records were not readily available at the time,” Holman explained. “I suspect the real number of potential violations is fourfold.”

Since Trump took office, Public Citizen, other watchdog groups, and lawmakers such as Sen. Elizabeth Warren (D-Mass.) have documented instances when members of the Trump administration, including the president himself, have ignored conflicts of interest and contributed to what Norm Eisen, a former White House ethics counsel and current chair of Citizens for Responsibility and Ethics in Washington, called “a gator and swamp rat infestation.”

great work @Public_Citizen @CBHolman @Lisa_PubCitizen fighting the swamp creatures that are invading Trump’s government. We got a gator and swamp rat infestation up in here in DC. https://t.co/L2TvXZBALc