The $50 million in school funding that was included in a bill last week “will buy less than one textbook per student,” said the head of the state teacher’s union 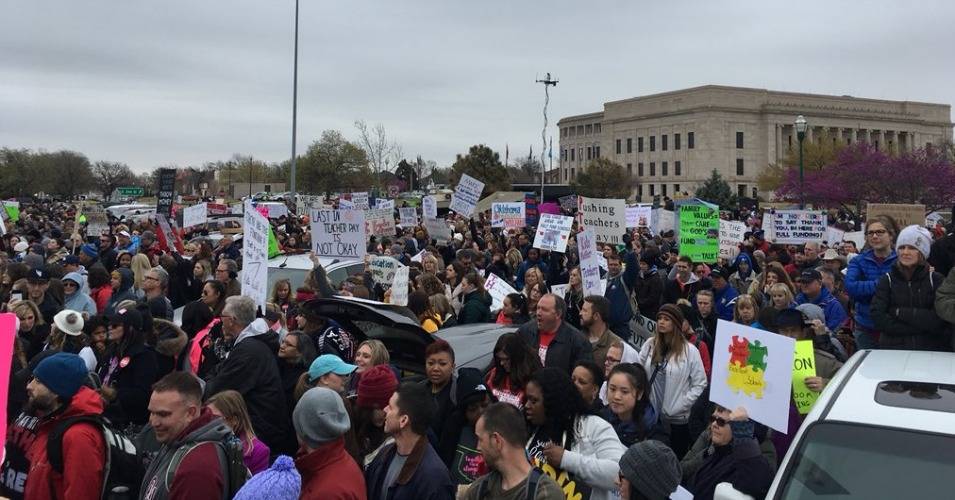 An estimated 30,000 Oklahoma teachers rallied at the State Capitol on Monday, demanding far more funding for education than what was included in the legislature’s last-minute effort to avoid a strike last week. (Photo: @cora/Twitter)

A weeks-long mobilization in Oklahoma resulted in teachers striking across the state on Monday, with tens of thousands of educators and supporters rallying at the State Capitol in Oklahoma City to demand more funding for schools and higher wages for teachers.

Organizers planned to speak with state lawmakers about how decades of funding cuts have affected their schools—and why a bill passed in the legislature last week that would raise taxes on oil and gas production to give teachers a $6,100 raise and allot $50 million for school funding was not enough to stop the protest.

An NBC News aerial video of the scene at the demonstration showed an estimated crowd of 30,000 people gathered outside the Capitol.

Public teachers from all over Oklahoma have surrounded the capitol, with plans to confront legislators over years of austerity funding. https://t.co/KfOtl2gY0G pic.twitter.com/v7EzSh4bPC

Oklahoma Education Association (OEA) president Alicia Priest told CNN the package was “a good starting point,” but said teachers see it as a last-ditch effort by lawmakers to keep the strike from happening and not a genuine attempt to improve schools.

“Fifty million dollars will buy less than one textbook per student, so it’s not a real way to fund education,” Priest said. “We’ve been cut over 28 percent in the last 10 years in education funding, and our schools just can’t maintain all of the supplies, instructional materials, textbooks, even copy paper. Copies are limited in schools to maybe 30 a week.”

The OEA is demanding a $200 million funding bill for schools, and a $10,000 raise for teachers over the next three years.

As teachers across the state prepared to rally, four teachers shared in a CNN video the numerous side jobs they have had to take on to make ends meet while educating Oklahoma’s schoolchildren. One educator with 25 years of experience detailed his work as a bus driver, landscaper, and roof salesman. Another said she works 15 to 20 hours in retail to supplement her teaching salary.

He’s a high school algebra teacher in Oklahoma. And a bus driver. And a Little League umpire. And he drives for Uber and Lyft. All because he says his teaching salary isn’t enough to support his family https://t.co/K8CVrQYM1w pic.twitter.com/UAvxtjkbpD

Two Oklahoma teachers shared these photos w/ me. Their students use these textbooks. It blows my mind. pic.twitter.com/kF6Azdlgy4

In case anyone was curious about the textbook situation in my classroom. Yes, I use technology, copies of primary resources, maps, etc. Tech can fail, printers jam, and paper copies run out. #OklahomaTeachers #oklaed pic.twitter.com/saKQYiN8Ea

Teachers boarded buses across the state early on Monday morning, with an estimated 30,000 expected at the State Capitol.

Bus full of TPS teachers and students ready to take off from @BTWHSTulsa and head to the capitol to walkout all day. #oklaed #oklaedwalkout @NewsOn6 pic.twitter.com/URVhuFiI8G

At least a dozen buses drop off teachers to join the thousands outside the Oklahoma State Capitol for the first day off the walkout. The state’s three largest districts are closed, affecting 100,000+ students. #oklaed #oklahomateacherwalkout pic.twitter.com/oUuYT4ItIP

As Common Dreams has reported, Oklahoma is just one state where teachers have railed against poor funding and chronically low pay in recent weeks. Also on Monday, a strike in Kentucky over changes to teachers’ pension plans continued, with educators traveling from across the state to the State Capitol in Frankfort. Most schools were closed for spring break, with teachers and supporters using their time off to protest—while 21 counties’s schools closed for the strike.

Teachers in Arizona held a demonstration in Phoenix last week—also hoping to draw attention to per-student funding, which was cut by more than 36 percent from 2008 to 2015.

The wave of protests follows the teachers’ strike in West Virginia last month, which shuttered every public school in the state for nine days and resulted in a five percent pay raise for teachers and an agreement to work towards funding for the state employee health insurance program.

In all the states where teachers have been voicing their dissatisfaction, lawmakers have spent decades handing out tax cuts to corporations while cutting funding for schools and leaving teachers with stagnant wages.

“After ten long years in a lot of these conservative states, the chicken is finally coming home to roost,” Lily Eskelsen Garcia, president of the National Education Association, told the Huffington Post. “They’ve given tax breaks to big corporations, defunded public schools, and said, ‘What could go wrong?'”