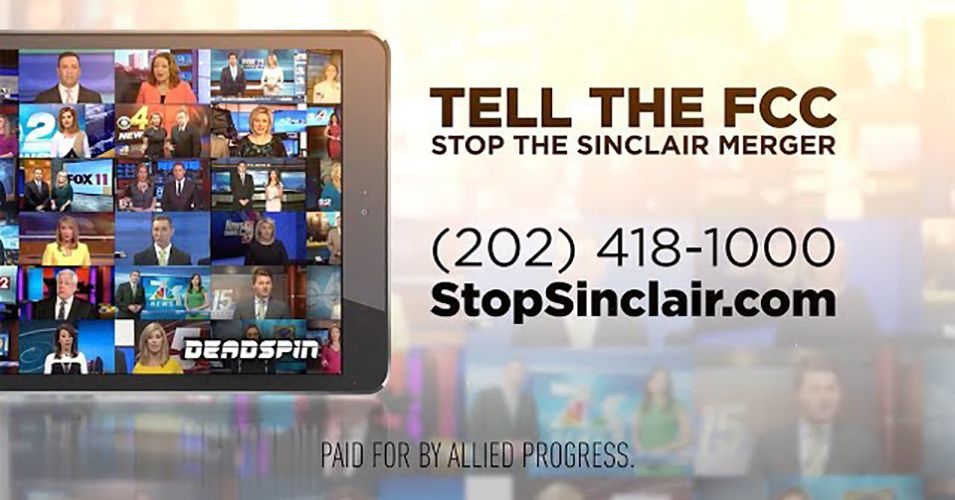 Sinclair began running the 30-second spot with a 15-second defense of Sinclair, followed by the Allied Progress 30-second ad, and then another 15-second of Sinclair’s voiceover: “The misleading ad you just saw focused on a brief promotional message that simply said we’re a source for truthful news. It ignored thousands of hours of local news we produce each year to keep you informed. The ad was purchased by a group known for its liberal bias, and we hope you won’t buy into the hysteria and hype.”

“When we bought airtime with Sinclair we didn’t think they’d respond by admitting they actively push a partisan agenda. But that’s essentially what they’ve done by attacking Allied Progress for a supposed ‘liberal bias’ while simultaneously claiming they want viewers to hear the other side in their response.”

“That we are a progressive consumer watchdog dedicated to holding special interests accountable is something we wear proudly on our sleeves. We’re clear about who we are. Sinclair is not. By claiming ‘both sides’ and attacking a critic’s liberal politics, they are acknowledging they actively disseminate partisan conservative propaganda, something clearly at odds with their repeated claims to the contrary.”

“It is standard practice for a station to seek permission before bookending an ad with a content warning. That did not happen here, which is hardly surprising coming from a company that doesn’t even subscribe to the basic pillars of independent journalistic integrity.”

“When one company owns this much of the local television media marketplace, it can drown out the voices of other sources, push a political agenda with little resistance, and misuse the people’s airwaves in an attempt to silence and malign its critics. That is precisely what Sinclair is doing. Imagine what they’ll do if the Tribune merger is approved and they can reach into the homes of 72% of Americans.”

“We will continue to sound the alarm over Sinclair’s encroaching control over America’s most trusted sources for local news. They can force their anchors to read from the same politically motivated script, but they can’t stop their viewers from changing the channel and contacting the FCC.”

The six-figure, one-week ad buy was slated to begin last Friday but faced significant delays from Sinclair and did not begin until this weekend on four stations: WJLA (ABC News) in Washington, D.C., KDSM (FOX News) in Des Moines, KOMO (ABC News) in Seattle, and Sinclair’s flagship station WBFF (FOX News) in Baltimore.

When a media company responds to critics by calling them liberal, they expose their own political agenda. #StopSinclair