350.org Seattle says that since President Donald Trump took office, “JPMorgan Chase has quadrupled its investments in tar sands and increased its financing of coal by 2,100%.” 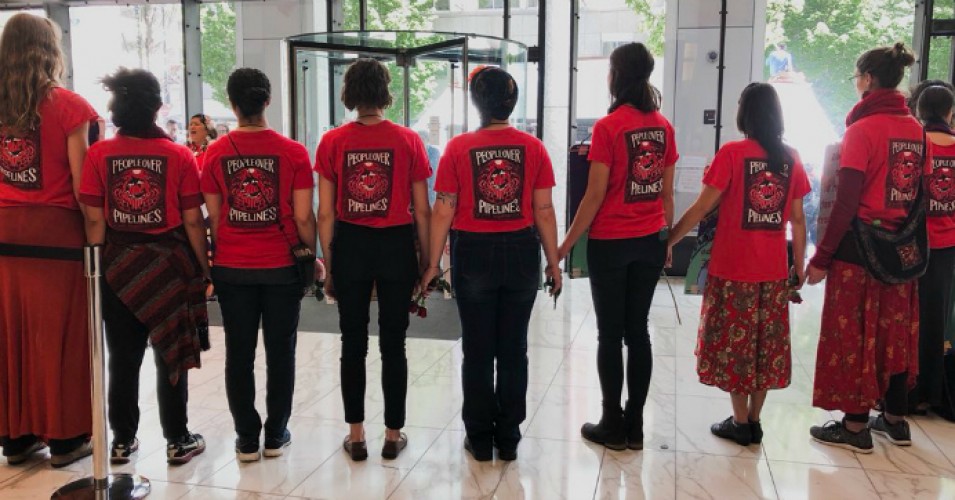 At least five indigenous and 15 non-indigenous female protesters occupied the lobby of the Russell Investments Center in downtown Seattle—where Chase’s regional leaders are based—while others shut down the street outside by erecting “tarpees” and hoisting a sign that read, “Road closed due to Chase’s financing of climate disaster.”

A message from atop one of the “tarpees” blocking 2nd Ave in downtown Seattle right now. Here is Aaron Brouillette, who has been sitting 14 feet up since 10A. pic.twitter.com/SpgVh9wY4n

Rachel Heaton:”We believe that Phyllis Campbell is a compassionate woman. We are simply here to help educate her about the harm that JPMorganChase’s [tar sands] investments are having…& to ask that she use her power, position & influence to help our communities,” #ShutDownChase pic.twitter.com/dte5n9qwmd

Multiple protesters were arrested for participating in the demonstration, according to 350.org Seattle, which tweeted: “Destroying the world in search of profit…perfectly legal. Peacefully protesting such destruction…not so much, it seems.”

Now THIS is ridiculous. Arrests starting now. Destroying the world in search of profit…perfectly legal. Peacefully protesting such destruction…not so much, it seems. No matter-we’ll be back. There too much at stake. #ShutDownChase pic.twitter.com/5E8Umatc2m

The demonstration mirrored a similar action in Iowa last month, when hundreds of progressive protesters gathered outside Wells Fargo’s annual shareholder meeting to demand that the bank divest from fossil fuels, private prisons, and the gun industry.

350.org Seattle asserts that since President Donald Trump—with his fossil fuel-friendly agenda—took office last year, “JPMorgan Chase has quadrupled its investments in tar sands and increased its financing of coal by 2,100 percent.”

“And it gets worse,” the group notes on its website. “Chase is currently trying to block its own shareholders from introducing and voting on a resolution that would force it to complete a study into its tar sands investments.”

Other protests against Chase’s investment in fossil fuels were held at various locations across the country on Monday, and documented on social media using the hashtag #ShutDownChase.

The Dallas chapter of 350.org, the Society of Native Nations, and Rainforest Action Network have planned a rally outside the shareholder meeting next Tuesday in Plano, Texas.

“JPMorgan Chase is one of the most destructive businesses on the planet,” declares a Facebook event for next week’s protest. “We need to stand up and show them we won’t tolerate threats to our clean water, clean air, and our human rights.”