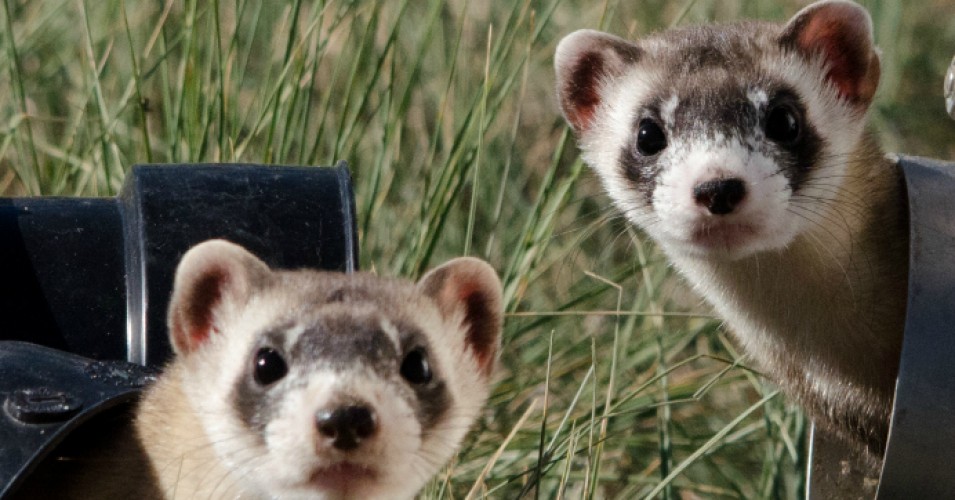 “Despite significant recovery successes,” according to the U.S. Fish & Wildlife Service, the black-footed ferret “remains one of the most endangered mammals in North America.” (Photo: Kimberly Fraser/USFWS Mountain-Prairie/Flickr/cc)

In honor of Endangered Species Day on Friday, 1,452 American scientists sent a letter to Congress demanding that they “protect the scientific foundation of the Endangered Species Act (ESA) and reject any attempts to weaken or compromise the role of science in protecting species.”

The letter (pdf) comes amid the Trump administration and Republican lawmakers‘ war on science, and particularly in response to their attempts—including through the “disastrous” GOP Farm Bill that was defeated on Friday—to undercut or strip away key elements of the ESA, landmark legislation enacted in 1973 that aims “to conserve to the extent practicable the various species of fish or wildlife and plants facing extinction.”

“We urge you to strongly oppose any efforts to reform the Endangered Species Act that would chip away at its scientific foundation, which would inevitably undermine the science underlying the law and lead to more species extinctions,” the letter reads.

The scientists also implore lawmakers to “provide adequate resources so that the Endangered Species Act can be meaningfully implemented.”

Acknowledging that the world’s burgeoning biodiversity crisis “jeopardizes the health and safety of the American public—from increased transmission of vector-borne diseases due to declining bat populations to decreased crop yield caused by the collapse of bee colonies and other pollinators”—it emphasizes the ESA’s ability to combat these mounting threats.

“Using the best available scientific resources at our disposal, we have prevented the irreversible destruction of many species and their habitats. The law has succeeded in preventing 99 percent of listed species from going extinct and led to the recovery of iconic species such as the American alligator, bald eagle, and Louisiana black bear,” it notes.

“Restricting the use of science in the Endangered Species Act or making the law vulnerable to political interference, as has been the case with some recent legislative proposals,” the letter warns, “would lead to otherwise preventable species extinctions and the destruction of habitat that is essential to environmental health.”

The letter outlines five principles these scientists consider essential pieces of the ESA:

“It is of lasting importance for our common good,” it concludes, “that the scientific principles embodied in the Endangered Species Act be preserved, and that the law be fully funded and implemented.”

Andrew Rosenberg, director of the Center for Science and Democracy at the Union of Concerned Scientists, pointed out that in the current political climate—alluding to a president and Republican majority in Congress that both seem hellbent on attacking all federal science-based environmental regulations—it is especially important to protect the integrity of the ESA.

“Congress has shown an increasing willingness to make environmental and public health laws less effective by gutting their reliance on the best available science,” Rosenberg said in a statement. “The Endangered Species Act is no exception—and it’s encouraging to see the science community coming together to guard against efforts to unravel this vital and effective law.”

According to the U.S. Fish & Wildlife Service, there are currently 1,274 endangered plants and animals in the U.S., as well as 388 threatened species. Several conservation groups took to social media on Friday to recognize Endangered Species Day to urge Americans to take action to support the ESA.

Tell your members of Congress to oppose any legislation that would weaken the Endangered Species Act. https://t.co/FnJlo751X5 pic.twitter.com/R4Zsgt30BH

Facts about the Endangered Species Act for #EndangeredSpeciesDay:
– It’s saved 99% of listed species from extinction
– 90% of Americans support it
– Anti-wildlife members of Congress are trying to destroy it