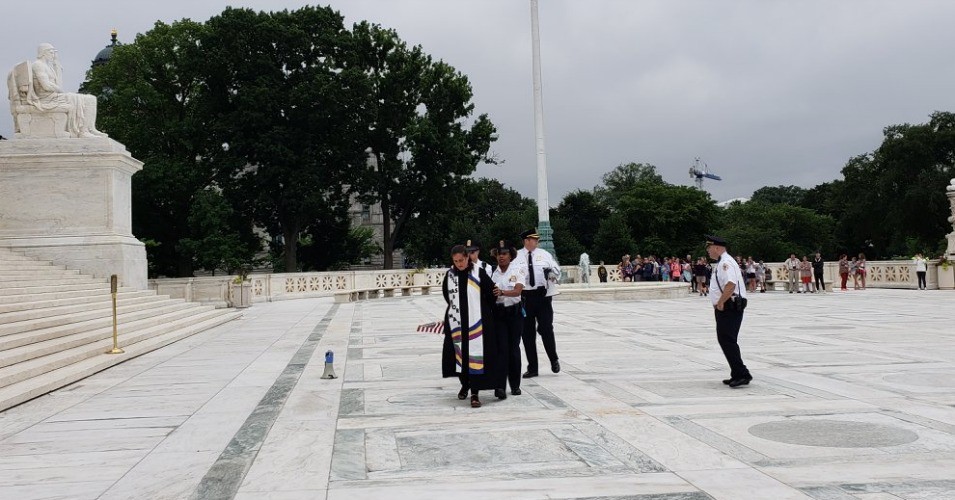 Rev. Liz Theohalis was among the community leaders who were arrested on Monday on Capitol Hill, while demonstrating as part of the Poor People’s Campaign. (Photo: @UniteThePoor/Twitter)

A day after being detained for leading a Poor People’s Campaign demonstration on Capitol Hill—just two of the dozens of arrests of anti-poverty advocates at protests across the country on Monday—Rev. William Barber and Rev. Liz Theoharis were set to speak at a forum on inequality and poverty in Washington, D.C. on Tuesday.

Sen. Elizabeth Warren and Rep. Elijah Cummings called the meeting in order to hear from Americans who are demanding that Congress address economic inequality and persistent poverty in many parts of the U.S.—amid the implementation of cruel policies like last year’s tax law, the benefits of which mainly went to the richest Americans.

Barber and Theohalis were among nine religious leaders who were arrested outside the Supreme Court where they were holding a demonstration four weeks into the Poor People’s Campaign, a “moral revival” continuing the economic justice advocacy that was central to Rev. Martin Luther Ling’s work when he was assassinated in 1968.

The six-week campaign has focused on an array of issues involving poverty and inequality in the U.S., including voting rights, healthcare, and the effects of the climate crisis on the poor.

Just before his arrest, Barber spoke to a crowd of supporters about voter suppression.

The forum on poverty was set to begin at 3:30pm EST on Tuesday. According to the Poor People’s Campaign’s Facebook page, Barber and Theohalis were still being held as of 12:00pm.

In cities across the country, other campaigners were arrested for protests where they demanded a living wage for all American workers, strong unions, and other policies that would lift communities out of the poverty that a U.N. official called “shockingly at odds” with the country’s wealth.

In Raleigh, North Carolina, at least 34 people were arrested while demanding a $15 minimum wage, while several protesters in Sacramento, California were ordered to leave the state Capitol after interrupting a Senate session to rally for affordable housing.

Nine campaign members were arrested for protesting in Pennsylvania, 16 were booked into the Shawnee County Jail in Topeka, Kansas, and a reporter for Truthdig was among those detained at a demonstration in Jefferson City, Missouri. In Frankfort, Kentucky, police have stopped the Poor People’s Campaign from entering the state Capitol for the past two weeks.

We’ve been removed from the Senate gallery and THOUSANDS of members of the #PoorPeoplesCampaign are packing the state Capitol in Sacramento pic.twitter.com/C7AB8ORUxY

In the fifth week of protests from the Poor People’s Campaign, more than a dozen demonstrators on Monday were taken into custody in front of the Kansas Department for Children and Families administration building in downtown #Topeka.
READ via @lrankerNEWS: https://t.co/fN2F2RW9cx pic.twitter.com/xsYopPma0D

“I can only two people in the building at a time.” Kentuckians denied entry during The KY Poor People’s Campaign Rally. pic.twitter.com/LY1dtbCc0w

The revival of the Poor People’s Campaign began two weeks before Philip Alston, the U.N. special rapporteur on extreme poverty and human rights, released his report on inequality in the U.S. The document explicitly blamed the Trump administration for actively increasing poverty and inequality levels in the U.S. by passing legislation like the Republican tax law.

“The policies pursued over the past year seem deliberately designed to remove basic protections from the poorest, punish those who are not in employment and make even basic health care into a privilege to be earned rather than a right of citizenship,” Alston concluded after a visit to several parts of the country late last year.