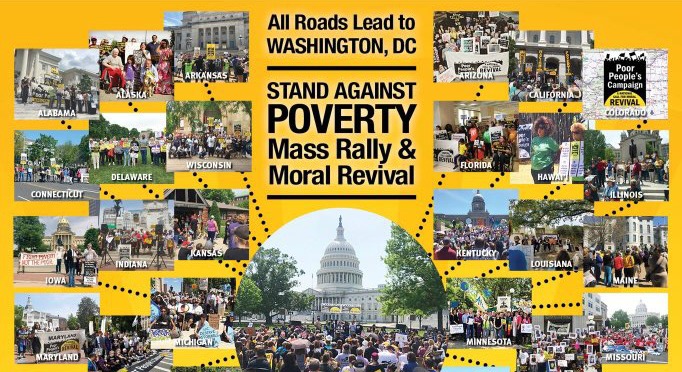 Twin banners declaring “Fight Poverty Not the Poor” flanked the stage, where rousing speeches by noted figures including Rev. William Barber, Rev. Jesse Jackson, American Federation of Teachers leader Randi Weingarten, as well as others on the front-lines of the fight for justice—and those who amplify their voices—drew cheers.

“We are sick, we are homeless, we are separated from our families, and we will keep coming back until everyone has housing, voting rights, clean water, peace, and justice!” said Rev. Dr. Liz Theoharis, who, along with Rev. Barber, co-chairs the campaign, which launched May 13.

“Take away our poverty, not our children!” – @liztheo #PoorPeoplesCampaign pic.twitter.com/tPVGwKW9dK

The campaign, which channels the effort by the same name Martin Luther King Jr. organized 50 years ago, boasts backers from a broad range of issues, including Friends of the Earth, Communications Workers of America, and the National LGBTQ Taskforce.

That diversity is mirrored in the campaign’s demands, which include include full restoration of the Voting Rights Act, enacting universal healthcare, repealing the Republican tax cuts, ending mass incarceration, switching to 100 percent renewable energy, terminating warmongering, and stopping the militarization of communities. Putting a spotlight on the basis for those demands are continuing actions by lawmakers at the state and national level, such voting for a massive military budget, introducing bills to restrict voting rights, calling for greater attacks on the safety net, and erasing environmental and public health safeguards.

A call-to-action for the event in the nation’s capitol references the broad-reaching demands and notes—as speakers did on Saturday—that the rally and march are not an end point, but merely a transition towards the next phase of the campaign:

In the face of systemic racism, systemic poverty, ecological devastation, the war economy/militarism, and the distorted moral narrative of religious nationalism—we must engage in mass nonviolent moral direct action. We must declare that we won’t be silent anymore about the war on the poor! On Saturday, June 23 the Campaign will head to the US Capitol in Washington, D.C. for the Stand Against Poverty Mass Rally & Moral Revival capping off our #40DaysOfAction and launching the next phase of our movement for the long-haul.

At the heart of it all, though, is perhaps a simple message:

Today we gather for a mass rally on the National Mall w/ a simple, powerful message:

“Everybody’s got a right to live!” #PoorPeoplesCampaign pic.twitter.com/89o9PE3bEQ

See more tweets from the event below:

A non-violent army of the poor is rising up! #PoorPeoplesCampaign pic.twitter.com/tqX7bIqdoj

Remembering Flint and other communities that don’t have safe drinking water. #PoorPeoplesCampaign pic.twitter.com/kNmmojTW88

Live inside the #PoorPeoplesCampaign March! This Is What Democracy Looks like✊🏾 pic.twitter.com/wVWYs7A0G3