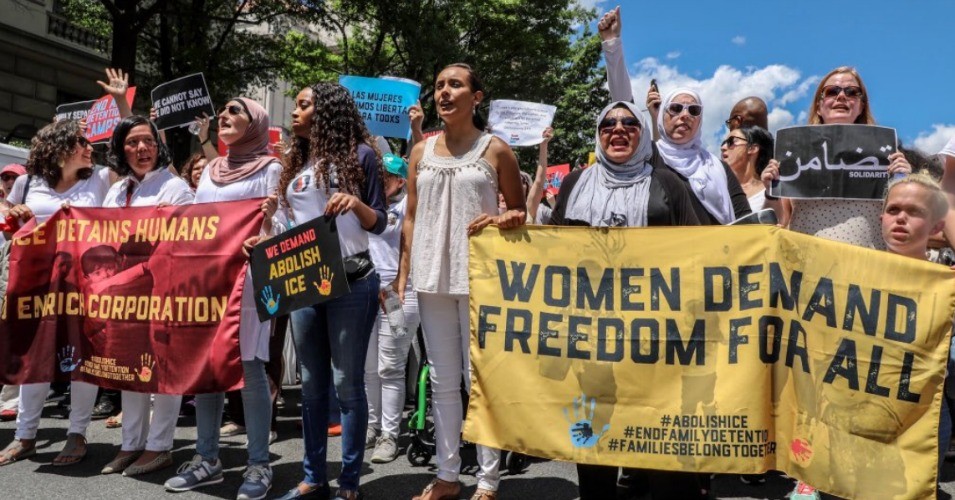 Wrapping themselves in foil blankets like those seen in images of children’s detention centers, nearly 600 protesters were arrested and charged with unlawfully demonstrating at the Hart Senate Office Building starting at around 3:15pm.

630 women in foil blankets are being arrested in Hart Office building now as they chant “Abolish ICE” and demand an end to family detention. #WOMENDISOBEY pic.twitter.com/k3J1lmqIPA

Earlier, the women had shut down streets surrounding Capitol Hill, chanting, “We care!” in reference to First Lady Melania Trump’s recent clothing choice while traveling to visit a detention center in Texas.

#womendisobey rally in the Hart Senate building in D.C.

They also made stops outside the Trump International Hotel and marched past the Department of Justice, where police officers guarded the doors.

Protestors have stopped outside the Trump International Hotel and are chanting , “Hey Hey, Ho Ho, zero tolerance has got to go.” #WomenDisobey pic.twitter.com/f5tWCPid1c

The DOJ has been fenced off and three officers stand guard out front. Two officers moved in front of the door as the crowd arrived. pic.twitter.com/JWV9aYLPPK

President Donald Trump’s signing of an executive order to end immigration officials’ separation of families has done nothing to quell the nationwide outrage over his administration’s “zero tolerance” immigration policy—with the Women’s March holding a major act of civil disobedience in Washington, D.C. on Thursday ahead of actions planned across the country this weekend.

This sea of women & accomplices gathering with @womensmarch to fight for freedom for all gives me hope @lsarsour #AbolishICE #EndFamilyDetention #WomenDisobey pic.twitter.com/JIXrHyYMku

TOMORROW: #WomenDisobey because @ICEgov has got to go, because migration is not a crime, and because we won’t sit back while this administration puts people behind bars for seeking refuge and a better life. #AbolishICE #EndFamilyDetention https://t.co/5EQ5CUIr2u

According to organizer Winnie Wong, thousands of women are expected to protest in the nation’s capital, demanding that Trump stop criminalizing asylum seekers and calling for Immigration and Customs Enforcement (ICE) to be abolished.

“Trump’s latest effort to fan the flames of intolerance and xenophobia, by cruelly ripping young immigrant children from the arms of their parents, has shocked the conscience of America,” wrote Wong in The Guardian. “You don’t have to be a parent to be appalled by the screams of toddlers as they are forcibly separated from their parents, but millions of mothers and fathers have been particularly horrified in a way that only parents can be as they watch these grotesque and inhumane family separations.”

The executive order Trump signed last week ordered ICE to stop separating families who cross the U.S.-Mexico border, but more than 2,000 children remain separated from their parents and guardians under the president’s “zero tolerance” policy. The order also continues the policy of prosecuting adults who cross the border without going through a port of entry, and stipulates that families will now be detained together indefinitely.

“The mothers, sisters, wives and daughters of America will not stand down until the imprisoned children are released and reunited with their families,” Wong wrote. “And we will not stay silent as federal enforcers indefinitely incarcerate whole families in detention camps. We will put our bodies on the line to demand an end to the Trump administration’s ‘zero-tolerance’ policy that automatically criminalizes undocumented immigrants.”

The protests come as the #OccupyICE movement spreads across the country, with Trump opponents blocking the entrances to ICE facilities in states including Oregon, California, and New York. Some local governments have also opted to end their cooperation with ICE, cutting off multi-million dollar contracts with the agency as officials grow increasingly alarmed at the president’s policy and reports of ICE’s treatment of immigrants and Latino communities.

“It just felt inherently unjust for Sacramento to make money from dealing with ICE,” Phil Serna, a Sacramento County supervisor, told the New York Times of his decision to cancel the city’s contract. “For me, it came down to an administration that is extremely hostile to immigrants. I didn’t feel we should be part of that.”

The Women’s March action also comes two days before nationwide demonstrations that the Families Belong Together coalition has planned for Saturday.

EVERY LAST ONE OF US belongs at the march on Saturday. If you can get to DC, we’ll see you at 11:00 a.m. at Lafayette Square (behind the White House). If not, people are rallying at 600 other locations on Saturday–count ’em, 600!!. Find out where here: https://t.co/xDtyvD77t8 https://t.co/Q3GzrF9HlH

Editors’ note: Alternet’s coverage of this is also worth reading.