“This is a cruel and harmful policy that was aggravated by the administration’s lack of basic humanity in thinking ahead of time about how it would bring these families back together.” 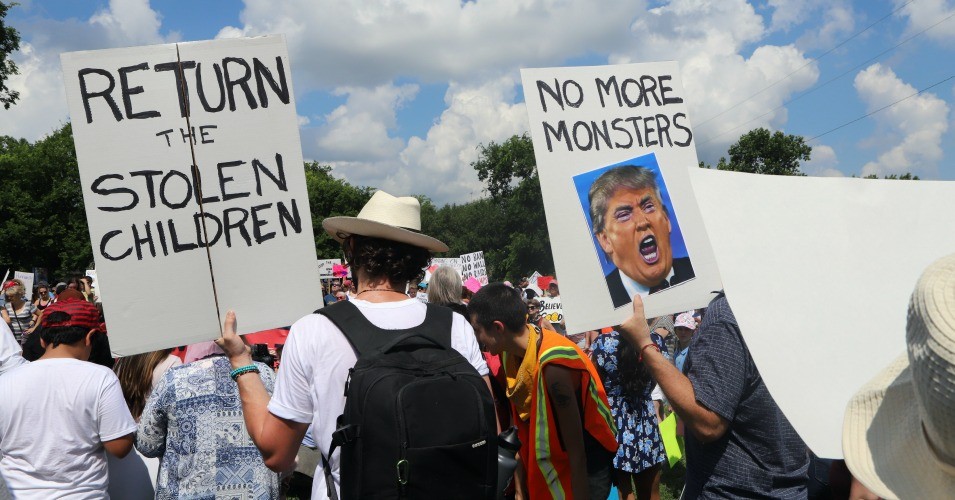 Hundreds of thousands of Americans protested against the Trump administration’s forcible separation of families at the U.S.-Mexico border last weekend, days after a federal judge ordered officials to reunite families. (Photo: Lindsey Turner/Flickr/cc)

Outrage over the Trump administration’s treatment of families who have crossed the U.S.-Mexico border, many seeking asylum, grew on Friday as officials told a U.S. District court that they would likely not be able to meet a deadline set more than a week ago for reuniting parents with their children.

It is disgraceful that the Trump Administration had no plan to reunite children after tearing them away from their parents, and it is even more disgraceful that they are now trying to delay the court-ordered deadline for doing so. https://t.co/CTFPPrC3T7

This is a cruel and harmful policy that was aggravated by the Administration’s lack of basic humanity in thinking ahead of time about how it would bring these families back together.

The Health and Human Services Department (HHS), which is responsible for the supervision of unaccompanied migrant children—including those the government took from their parents after introducing its “zero tolerance” immigration police in May—was scheduled to give an update on Friday to Judge Dana Sabraw about its ability to reunite families.

Sabraw last week ordered that children under the age of five must be reunited with their parents by July 10 and all family separations must end by July 26.

According to two Department of Homeland Security officials who spoke to the New York Times this week, some records have been destroyed.

What’s “extreme” is punishing parents who are legally seeking a better life for their families by traumatizing their children. #FamiliesBelongTogetherhttps://t.co/AyKvy2X0gi

A prompt deadline to reunite them is not “extreme,” it is humane. What is “extreme” is taking kids from their parents in the first place. https://t.co/ulN55YmhW7

This is unacceptable. It has been more than a week since I led 80 colleagues in calling on the Trump administration to explain its plan for reuniting families. They still haven’t responded. #FamiliesBelongTogether https://t.co/eqn86719ZL

As many as 3,000 children are currently in government custody in detention centers and foster homes around the nation. The Trump administration is conducting DNA tests and sorting through case files for the children to determine who their parents are and how to reunite them.

Meanwhile, in a case filing ahead of Friday’s hearing, HHS wrote that it wanted to ensure children’s “safety” when releasing them from government custody and that it may not be able to reunite some families if the parents have been deported.

For @SecAzar to blithely say HHS has “under 3,000” children in custody (a round number larger than the originally cited 2,047) is a shocking indication of this administration’s depraved indifference. If HHS misses the deadline, the judge should jail Azar for contempt of court.

These people are MONSTERS but also incompetent, corrupt, taxpayer-funds-wasting monsters. https://t.co/VlWBsUSYCM Also consider that this is entirely a Trump-manufactured crisis. All of it.

In light of reports that records about children and parents’ whereabouts have been destroyed, Citizens for Ethics and Responsibility in Washington (CREW) demanded Friday that HHS and DHS be subject to an investigation for potential violation of the Federal Records Act (FRA).

“Rarely, if ever, has a potential violation of the FRA had such grave implications,” CREW Executive Director Noah Bookbinder said. “The reportedly destroyed records bear directly on the lives of thousands of immigrants seeking entry to our country, threatening the permanent separation of parents from their children.”

This work is licensed under a Creative Commons Attribution-Share Alike 3.0 License
Editors’ note: In Friday’s hearing, the lawyer for the Trump administration said she couldn’t work over the weekend, as she had a prior dogsitting obligation. Seriously.