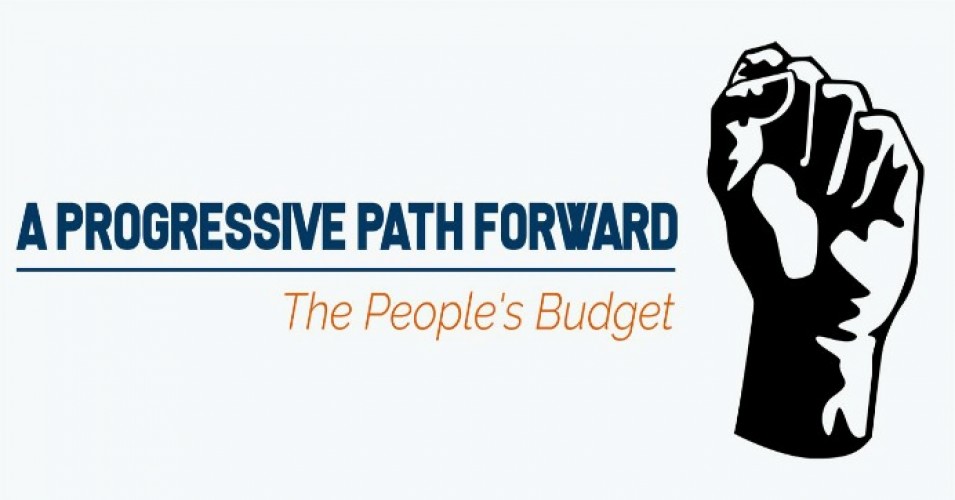 Titled The People‘s Budget: A Progressive Path Forward (pdf), the CPC’s plan also calls for a ban on “any expansion of U.S. combat troops in Syria, Iraq, Yemen, Afghanistan, and many other countries,” demanding an immediate end to “the policy of funding endless wars.”

“The electorate is looking for a new vision for the country and for foreign policy in particular,” Paul Kawika Martin, senior director for policy and political affairs at Peace Action, noted in a statement on Tuesday. “The People’s Budget embodies that new vision by investing in the interests of the people over the interests of the arms industry and the billionaire class.”

Highlighting the Trump administration’s deeply inhumane immigration agenda—which has been a boon for the private prison industry—the CPC’s budget also calls for scaling back “exorbitant funding for immigration detention and enforcement; creating due process, fairness, and accountability in the system; and eliminating the profit motive in immigration detention.”

“As Trump pushes to ramp up excessive border spending and hire more border patrol agents, we’re saying no,” Rep. Pramila Jayapal (D-Wash.), the First Vice Chair of the CPC, declared on Tuesday. “I just returned from the border and what I saw was heartbreaking—kids in cages, awful conditions, and continued family separation. We can’t keep funding this broken system.”

While the People’s Budget stands no chance of passing the Republican-dominated Congress, Jayapal noted that the CPC plan is a “moral document” aimed at articulating House Democrats’ vision and priorities for the months ahead.

In addition to calling for trillions of dollars in funding for healthcare and education, the People’s Budget also demands “more for our climate,” Jayapal notes.

Specifically, the budget calls for a complete elimination of corporate welfare for fossil fuel companies while proposing $2 trillion “to eliminate our lead-contaminated water system” and $80 billion in disaster aid relief for families and communities devastated by extreme weather, which has been worsened by the climate crisis.

Polluters must pay their fair share for the waste they create. Tax breaks that prioritize the fossil fuel industry must end. We must prioritize frontline communities and renewable energy.

In contrast to Republican economic policies and budgets that have produced falling wages while deepening inequality, the Economic Policy Institute (EPI) found in an analysis on Tuesday that the People’s Budget would “improve the economic well-being of low- and middle-income families” by making badly needed public investments, allowing the government to negotiate drug prices, and bolstering the safety net.

“The People’s Budget invests in our neglected infrastructure, ends the systematic inequality in our tax system by making corporations pay their fair share, and stops the rising cost of drugs,” Public Citizen concluded on Twitter. “It’s time to put political and economic power back in the hands of the people. ”

This work is licensed under a Creative Commons Attribution-Share Alike 3.0 License
Editors’ note: Meanwhile on the other side of the aisle, they’re doubling down on the fiscal insanity.