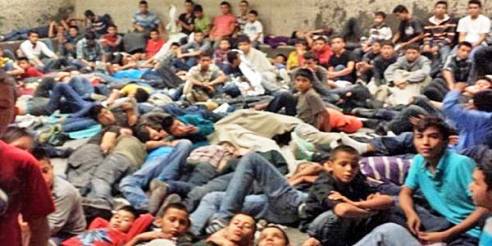 U.S. District Judge Dolly Gee of Los Angeles ruled on Monday that a Texas detention center for unaccompanied migrant children and those forcibly separated from their families by the Trump administration must stop administering psychotropic drugs without parental consent.

“A federal court has now confirmed what we already knew: Children are suffering abusive treatment and cruel and inhumane conditions in government detention centers,” responded Jess Morales Rocketto of Families Belong Together, a coalition of groups opposing the administration’s family separation policy. “Children belong with their families, not scared, alone, and subject to abuse in prison-like conditions.”

As Common Dreams reported last month, court filings alleged that children detained at the nonprofit Shiloh Treatment Center near Houston were forced to take drugs such as Clonazepam, Divalproex, Benztropine, and Duloxetine—used to treat seizures, Parkinson’s disease, and depression—which led them to feel “dizzy, lethargic, and even incapacitated.”

Although immigrant rights advocates welcomed Gee’s ruling, which found that Shiloh staff had violated the state’s child welfare laws, as one attorney unaffiliated with the case put it, “That this even has to be said is grotesque.”

A reminder that a lot of people involved in the implementation of Trump’s atrocious anti-immigrant campaign should be in prison. https://t.co/xBHsdCV4XQ

Gee ordered that the government must obtain parental consent before giving psychotropic drugs to a detained minor, and if a parent is unavailable to grant permission, officials may only administer such medication “on an emergency basis” or under a court order, according to NBC News. She also ruled that all children involved in the class-action lawsuit must be removed from the contracted facility “unless a licensed psychologist or psychiatrist” determines that a particular child “poses a risk of harm to self or others.”

Shiloh is a secure detention center, the most restrictive option for housing migrant children. Under the 1997 Flores agreement, there is a limit on how long a child can be detained and the government is required to hold them in the “least restrictive” setting that can provide for their individual needs. As the Post pointed out:

The facility also has a history of troubling practices, including allegations of child abuse, according to the Center for Investigative Reporting. A local congresswoman called for Shiloh to be shut down four years ago after the Houston Chronicle reported on long-running allegations of physical violence, excessive use of physical restraints, and several deaths of children in custody.

A doctor at Shiloh who has signed off on many prescriptions for psychotropic drugs to immigrant children has practiced without board certification to treat children and adolescents for nearly a decade, the Center for Investigative Reporting found.

As of Sunday, more than 700 migrant children remained separated from their asylum-seeking parents, CNN reported, despite a court order for a separate lawsuit which mandated that the Trump administration reunite all separated families by last Thursday.