In an apparent win for the president’s hostile rhetoric, nearly half of Republicans also agree with his claim that “the news media is the enemy of the American people.” 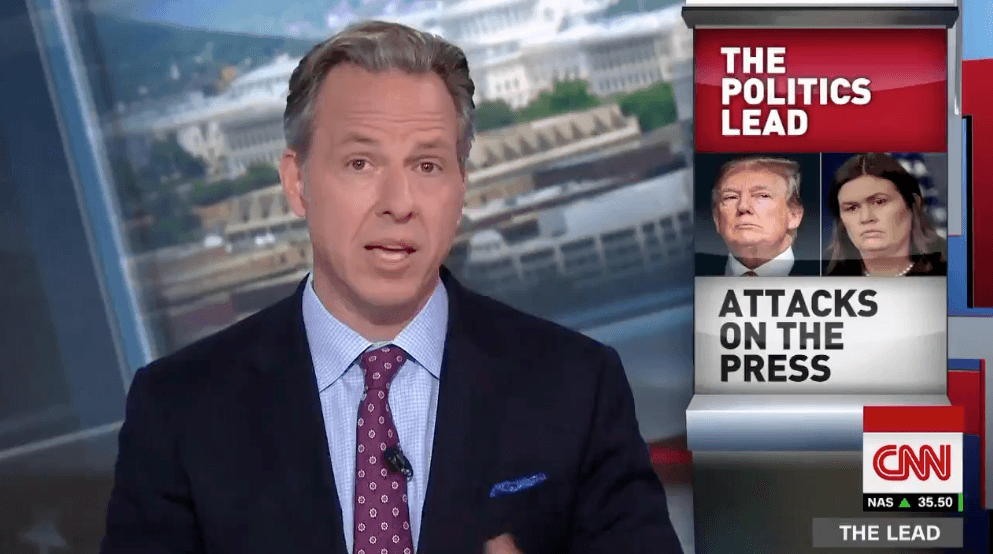 In the age of “media-bashing enthusiast” President Donald Trump—who regularly declares critical journalists and outlets “fake news” and “the enemy of the American people”—at least 43 percent of Republican respondents to a new survey said they believe “the president should have the authority to close news outlets engaged in bad behavior.”

The Ipsos poll (pdf), first reported by The Daily Beast‘s Sam Stein, also found that nearly half of Republicans agree with one of the president’s most common claims: that “the news media is the enemy of the American people.” As Stein notes, “members of the press, as well as top officials at some of the nation’s leading publications, have objected to the phrase, arguing that it is both wildly inaccurate and deeply dangerous.”

Earlier this year—following Trump’s so-called Fake News Awards—Reporters San Frontières, the international watchdog that ranks global press freedom, downgraded the United States, citing the president’s hostility and raising alarm that his behavior could have negatives repercussions the world over. As the group’s leader put it, “The unleashing of hatred towards journalists is one of the worst threats to democracies.”

This new poll’s findings, as Stein writes, “present a sobering picture for the fourth estate, with respondents showing diminished trust in the media and increased support for punitive measures against its members,” and “illustrate the extent to which Trump’s anti-press drumbeat has shaped public opinion about the role the media plays in covering his administration.”

Additionally, 72 percent of those polled—85 percent of Republicans and 63 percent of Democrats—think it should be easier to sue reporters for libel allegations.

Despite these “nuts” and “terrifying” takeaways—which left many readers concluding that “the war that Trump is constantly waging on the media and the truth is bearing some major fruit,” and “43 percent of Republicans want a dictator instead of a president who follows the Constitution”—there were a few silver linings:

And though Stein’s report on the survey sparked concerns, The Huffington Post‘s Ariel Edwards-Levy pointed out in a series of tweets that while an anti-media stance seems to have gained popularity under the Trump presidency, American support for the idea of the president closing down publications is not necessarily new:

In 1979, 22% of Americans agreed that “the President has a right to close down a newspaper that prints stories that he feels are biased or inaccurate.” So, not really, no. pic.twitter.com/inxHzNIsxk

But there’s always going to be a minority of the public that is kinda fuzzy on the First Amendment, and that’s not solely a product of the Trump Administration.