But with less than two months to go before crucial midterm elections, early estimates indicate the GOP’s proposals would blow a nearly $3 trillion hole in the federal budget over ten years while sending the vast majority of the benefits to the top.

“The GOP doubling down on fake trickle-down puts Medicare, Medicaid, ACA, Social Security, education, and more in the cross hairs. People need to fight back,” Frank Clemente, executive director of Americans for Tax Fairness, wrote on Twitter. “Think how many kids we could put through college, roads we could pave, families that could get child care, seniors that could get help with prescription drugs with that much money. Shame!”

In a statement late Monday, Alan Essig, executive director of the Institute on Taxation and Economic Policy (ITEP), denounced the GOP’s last round of tax cut proposals as yet another right-wing attempt to “impose the will of wealthy donors on the rest of us.”

At the center of the GOP’s new tax cut package—which progressive critics have taken to calling Tax Scam 2.0—is the proposal to make the individual tax cuts of the current law permanent. Without this move, the individual rate cuts will expire in 2025.

According to a recent ITEP analysis, 71 percent of the benefits of such a change would go to the richest 20 percent of households.

“Tax cuts 2.0 is another shameful attempt to impose the will of wealthy donors on the rest of us,” Essig concluded. “It should not see the light of day.” 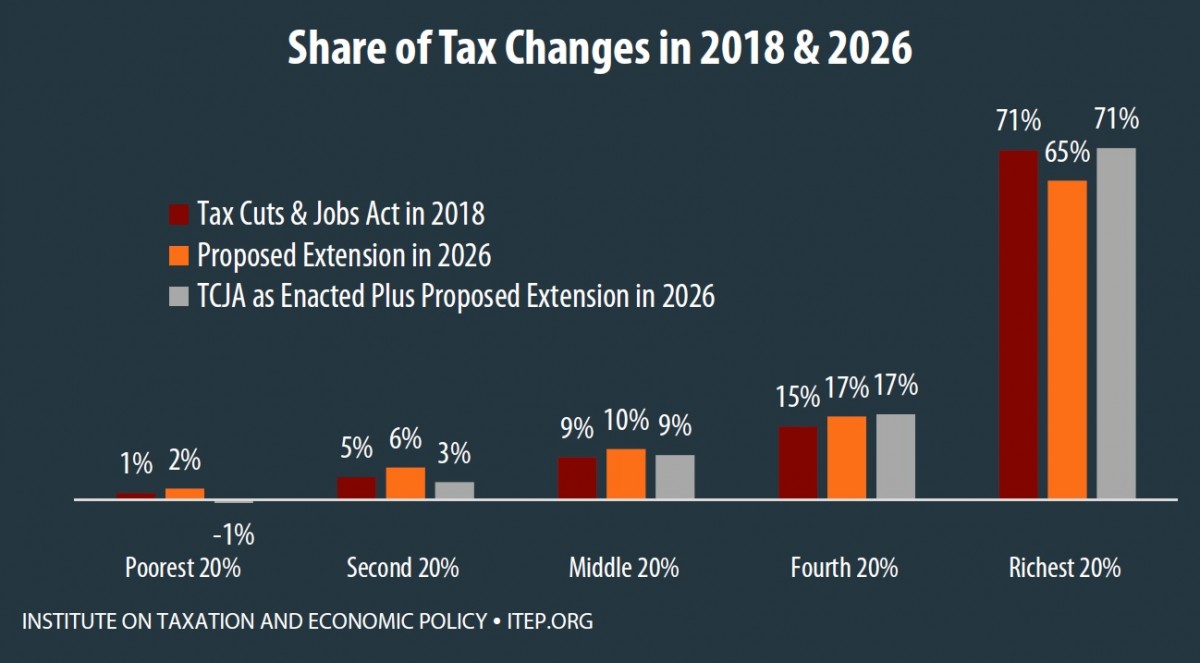 According to the Center on Budget and Policy Priorities (CBPP), making the GOP’s individual tax cuts permanent would cost the federal government around $3 trillion in revenue over the first decade of implementation (2026 to 2035). Even the conservative Tax Foundation put the cost of the GOP’s plan at around $2.4 trillion over a ten year period.

“The House GOP wants to add another $2.4 trillion in tax cuts after already cutting $2 trillion in taxes on corporations and the very rich last December,” noted New York congressional candidate Alexandria Ocasio-Cortez on Twitter. “You ever notice how no one asks the GOP how they’re going to pay for it?”

The House GOP wants to add *another* $2.4 trillion in tax cuts after already cutting $2 trillion in taxes on corporations & the very rich last December.

You ever notice how no one asks the GOP how *they’re* going to pay for it? https://t.co/yfK5dzi3es

“Extending the cuts to individual tax rates isn’t a win for middle-class Americans. Congressional Republicans are dropping a few crumbs in front of the American public to distract from the fact that they’re robbing them blind,” the Patriotic Millionaires declared in a statement on Tuesday. “Just wait, Republicans are going to use these cuts later as an excuse to cut Medicare, Medicaid, Social Security, and other programs millions of Americans rely on.”

Despite the deep unpopularity of their initial round of tax cuts, Republicans are looking to ram the second round through in time for November’s midterm elections. House Ways and Means Committee Chairman Kevin Brady (R-Texas) said a floor vote on the Tax Scam 2.0 could come by the end of the month.