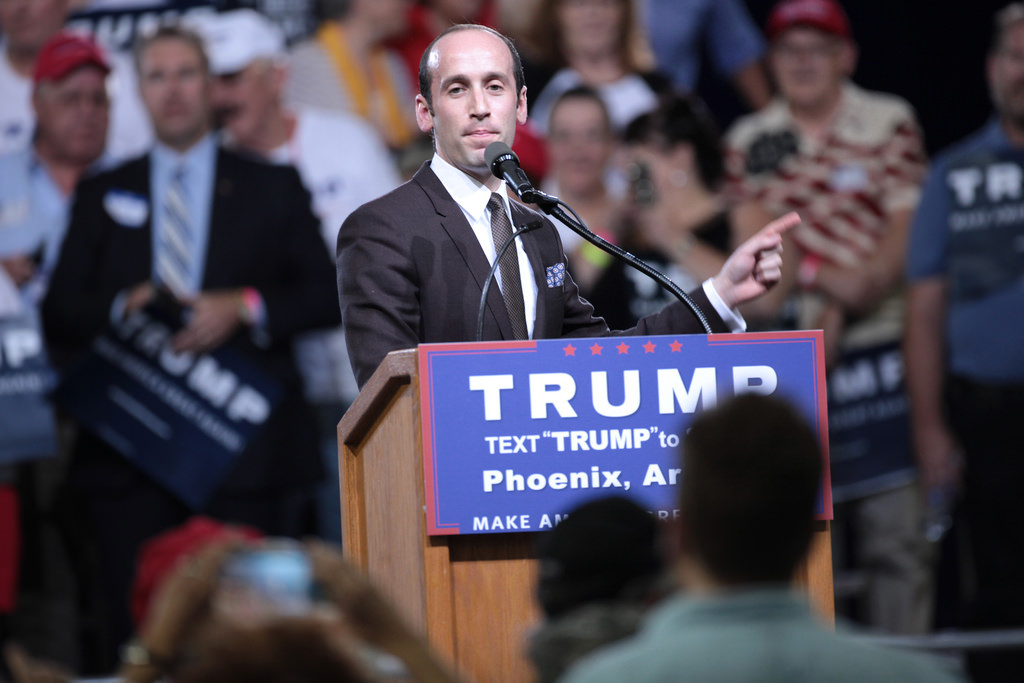 “At a time when the world is facing the largest displacement crisis in recorded history, it is unconscionable that the Trump administration would further dismantle the U.S. Refugee Admissions Program by setting a cap of 30,000 refugee admissions for fiscal year 2019—the lowest resettlement cap in the program’s history,” Win Without War director Stephen Miles said in a statement slamming the White House’s decision.

“What’s more,” Miles continued, “the U.S. has a direct moral responsibility to open its doors, not slam them shut, given that our own nation is an active combatant in many of the very conflicts and humanitarian crises driving the global refugee crisis.”

We are experiencing the largest displacement crisis in recorded history with over 68 million displaced persons and 25 million refugees globally. Today the Trump administration lowered the US refugee cap to 30,000 people per year. Shameful. #RefugeesWelcome https://t.co/6Bf3irUbIS

Unveiled by Secretary of State Mike Pompeo on Monday, the new “cap” of 30,000 refugees is 15,000 lower than the 2018 mark, making the new policy a major victory for top White House adviser and virulent racist Stephen Miller.

According to the New York Times, Miller joined forces with President Donald Trump’s chief of staff John Kelly to push for an even lower cap of 25,000 refugees, and Pompeo ultimately accepted Miller’s xenophobic push for a “deep cut.”

“This is the lowest goal in the history of the program, and compounded by this administration’s history of creating road block after road block for refugees to arrive, this must be perceived as an all-out attack against our country’s ability to resettle refugees both now and in the future,” Ryan Mace, grassroots advocacy and refugee specialist at Amnesty International USA, said in a statement.

“Today’s announcement demonstrates another undeniable political attack against people who have been forced to flee their homes,” Mace concluded. “There is absolutely no excuse for not accepting more refugees in the coming year.”

While the administration’s official cap represents the highest number of refugees the White House is willing to provide a safe haven from violence and persecution, it is far from a requirement.

Thanks in large part to its inhumanely restrictive border and asylum policies, the Trump administration admitted just 20,918 refugees in 2018, less than half of the White House’s 45,000-person cap.

But as the Trump administration has drastically restricted the number of refugees from Africa, Asia, and the Middle East, Vox‘s Dara Lind noted on Monday that the White House has not significantly curtailed European refugee admissions.

“While refugee arrivals from other parts of the world are down as much as 90 percent from Obama-era levels, resettlements from Europe—specifically, the former Soviet Union—have taken only a modest hit,” Lind observes, citing new government data. “In the rest of the world, the Trump administration isn’t going to come anywhere close to the ‘ceilings’ it set for the fiscal year ending September 30.”

“The Trump administration already accepted a historically low amount of refugees,” noted Rep. Pramila Jayapal (D-Wash.) on Monday in response to Pompeo’s announcement. “These new restrictions are outrageous. I came here at age 16 as an immigrant and today I am a congresswoman. Who could these refugees fleeing violence be if we gave them the chance?”