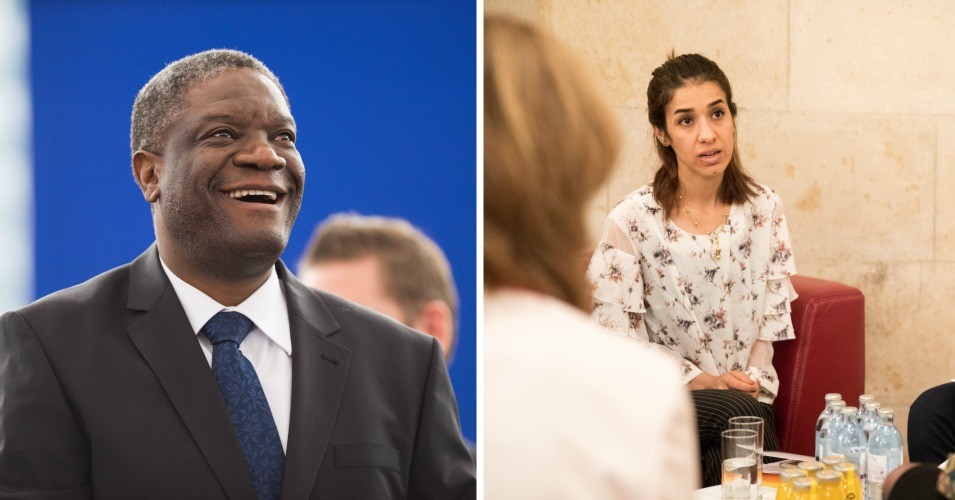 Dr. Denis Mukwege was recognized for treating victims of rape, while Nadia Murad, a Yazidi woman who has spoken out about being held as a sex slave by ISIS, was awarded the prize for her work as a human rights campaigner following her experience.

“Both laureates have made a crucial contribution to focusing attention on, and combating, such war crimes,” said Berit Reiss-Andersen, chair of the Norwegian Nobel Committee. “Denis Mukwege is the helper who has devoted his life to defending these victims. Nadia Murad is the witness who tells of the abuses perpetrated against herself and others. Each of them in their own way has helped to give greater visibility to wartime sexual violence, so that the perpetrators can be held accountable for their actions.”

Mukwege opened a clinic two decades ago in the Democratic Republic of Congo (DRC), with the goal of treating women who had been subjected to sexual violence during armed conflicts. Since then, he has treated thousands of women who have been raped during war, and has spoken publicly about such abuses as an international affliction.

“It’s not a women question; it’s a humanity question, and men have to take responsibility to end it,” Dr. Mukwege said in one interview. “It’s not an Africa problem. In Bosnia, Syria, Liberia, Colombia, you have the same thing.”

According to the New York Times, Mukwege has continued his advocacy even after facing threats to his safety. Following his impassioned speech at the United Nations in 2012 in which he condemned the Congolese government and other nations for standing by as women faced sexual violence during the country’s civil wars, armed men entered his home, took his children hostage, and attempted to shoot him. After two months in exile, Mukwege returned to his work.

Mukwege has been joined in the fight against sexual violence in recent years by Murad, who has spoken out about her own experience being captured from her home in northern Iraq, along with thousands of other Yazidi women and girls, by ISIS in 2014.

Both laureates have “put their personal security at risk by courageously combating war crimes and seeking justice for the victims,” Reiss-Andersen said when announcing the award.

Since escaping, Murad has demanded that international leaders acknowledge and fight against the abuse of women like her, speaking to the United Nations Security Council, the U.S. House of Representatives, the British House of Commons, and the U.S. State Department—which recognized the genocide of the Yazidi people following her appeal.

“I want to be the last girl in the world with a story like mine,” Murad wrote in her autobiography last year.