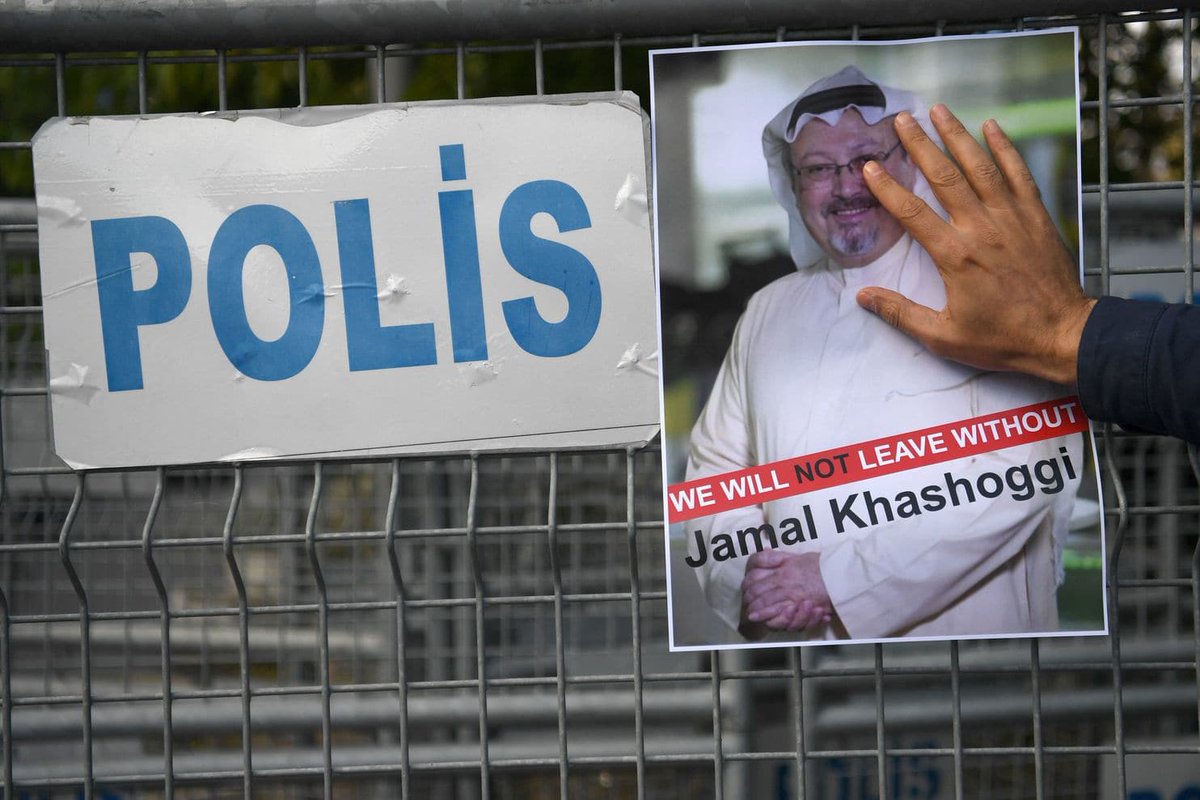 Spurring fresh outrage among those who criticize the cozy relationship between the U.S. government and the Saudi monarchy—with emphasis on Crown Prince Mohammed bin Salman (MbS)—political dissident and Washington Post columnist Jamal Khashoggi, a Saudi Arabia national living in self-imposed exile abroad, was tortured and killed last week by a Saudi  government ‘murder team,’ according to Turkish sources, while inside the Saudi consulate building in Istanbul, Turkey.

“The initial assessment of the Turkish police is that Mr Khashoggi has been killed at the consulate of Saudi Arabia in Istanbul. We believe that the murder was premeditated and the body was subsequently moved out of the consulate,” one of the two Turkish officials told Reuters on Saturday. The writer, the news agency reported, entered the consulate last Tuesday to secure documents for his forthcoming marriage while his fiancee waited outside. He never came back out, she said, and has not been seen or heard from since.

Citing two people with knowledge of Turkey’s probe, the Post‘s reporting says that the 15-member Saudi hit team was sent “specifically for the murder” and that the entire thing was “pre-planned.” According to the Post:

The killing, if confirmed, would mark a startling escalation of Saudi Arabia’s effort to silence dissent. Under direction from the crown prince, Saudi authorities have carried out hundreds of arrests under the banner of national security, rounding up clerics, business executives and even women’s rights advocates.

“If the reports of Jamal’s murder are true, it is a monstrous and unfathomable act,” Fred Hiatt, the director of The Post’s editorial page, said in a statement. “Jamal was — or, as we hope, is — a committed, courageous journalist. He writes out of a sense of love for his country and deep faith in human dignity and freedom. He is respected in his country, in the Middle East and throughout the world. We have been enormously proud to publish his writings.”

Khashoggi may have been considered especially dangerous by the Saudi leadership, analysts said. His criticisms of the royal family and its vast powers were delivered from his self-imposed exile in the United States and could not be dismissed as the complaints of a longtime dissident.

“Unbelievable” and “WTF!!!” declared CodePink’s Medea Benjamin, a U.S. peace activist and expert on the Saudi’s human rights record, after reading the news.

If the murder happened as is being reported, Benjamin told Commons Dreams, it is “beyond belief,” but also quite easy to believe given the country’s record and that of MbS.

“It exposes the horrific nature of the Saudi regime,” she explained, “and it has the fingerprints of the crown prince all over it.  MbS, who was feted as a refreshing young reformist when he visited the United States, bombs children in Yemen with impunity. He jails women human rights activists and then declares himself a liberator of women. He imprisons and shakes down his internal rivals in an ‘anti-corruption’ drive. He kidnaps the Lebanese head of state and creates a Gulf-wide crisis by attacking Qatar. And now he has a journalist who was living in the United States, a journalist who was a mild critic, murdered on Turkish soil?”

MbS, she concluded, “is out of control and this should be the long-awaited moment for the US to totally recalibrate its relationship with this criminal regime.”

Benjamin wasn’t the only one arguing the murder should force a reckoning in terms of U.S.-Saudi relations. “If this is true – that the Saudis lured a U.S. resident into their consulate and murdered him – it should represent a fundamental break in our relationship with Saudi Arabia,” declared Sen. Chris Murphy (D-Conn.) in response.

“If true, this would be an abysmal new low,” said Amnesty International’s Middle East Research Director Lynn Maalouf. “Such an assassination within the grounds of the consulate, which is territory under Saudi Arabian jurisdiction, would amount to an extrajudicial execution. This case sends a shockwave among Saudi Arabian human rights defenders and dissidents everywhere, eroding any notion of seeking safe haven abroad.”

For anyone who wasn’t convinced of MBS’ ruthlessness after the crucifictions and the torture of political opponents and the imprisonment of women’s rights activists and the war in Yemen, here is another gruesome piece of evidence. https://t.co/mXxDm2PZ5i

“I’m devastated, shocked and enraged at this news that Turkish authorities believe that my colleague Jamal Khashoggi has been killed in the consulate of Saudia Arabia in Istanbul,” declared Jason Rezaian, a writer for the Global Opinions section of the Post. Khashoggi has been a opinion contributor to the Post since 2017 as well as an outspoken critic of the Saudi government and the Royal Family.

Here is some of the powerful commentary Jamal Khashoggi contributed to the Washington Post during the last year. He was calling for greater freedom in Saudi Arabia, including for women. Is that a capital offense? https://t.co/bEnFxhTq5I

Days ago, after Khashoggi went into the consulate but never came out, allies in Turkey who believed he was being detained against his will began rallying outside the building to demand his release. In the midst of those demands, MbS told Bloomberg News Khashoggi had left the consulate shortly after he arrived, though neither the crown prince nor the Saudi government provided any evidence to substantiate their claims.

Having consolidated his power within the Kingdom in recent years, MbS has not only been the driving force behind the devastating war against neighboring Yemen, he has also moved aggressively to crush dissent in his own country while simultaneously presenting himself to western governments—none more conspicuously than the United States—as a “reformer” of the notoriously corrupt, abusive, and anti-democratic Saudi government.

In March of this year, the prince travelled to the U.S., as Common Dreams reported at the time, for a whirlwind “whitewash tour” where the “socially acceptable war criminal” met with political and wealthy elites as well as Hollywood celebrities in an overt effort to polish his image and ingratiate himself to the American ruling class.

As Jon Schwarz of The Intercept expressed in a series of tweets overnight, the possible murder of Khashoggi—likely ordered by MbS himself—only highlights the corrupt, violent, and insidious result of the backing and support given to the Saudis by the U.S. government and some of its most powerful people:

Here’s a short, four-part story about how the world actually works: pic.twitter.com/ydD7a53mLL

Here’s Jeff Bezos, owner of the Washington Post, yukking it up back in March with Saudi Crown Prince Mohammed bin Salman, whose government appears to have just murdered a Washington Post columnist. pic.twitter.com/G0CIGOYeun

As Amnesty’s Maalouf stated, “The international community’s deafening silence on Saudi Arabia’s crackdown on freedom of expression must end and it must demand an immediate explanation from Saudi Arabia’s authorities about Jamal Khashoggi’s fate or whereabouts. If the reports are true, they must immediately launch an independent investigation and those responsible, however high their rank or status, must face justice.”