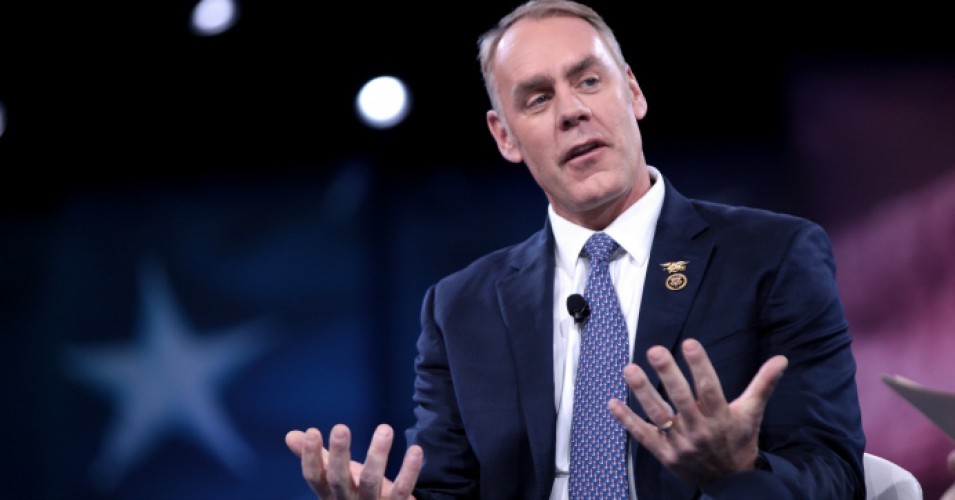 Outgoing Interior Secretary Ryan Zinke speaks at the Conservative Political Action Conference (CPAC) in 2016, when he served as a congressman for Montana. (Photo: Gage Skidmore/Flickr/cc)

Amid the chaos of the ongoing government shutdown and winter holidays, critics on Monday are calling out the Trump administration for quietly moving to make it harder for the public to find out what goes on behind closed doors at the U.S. Department of the Interior.

A proposed new rule (pdf) filed to the Federal Register on Friday would enable the department—which, along with the Environmental Protection Agency (EPA), has been responsible for pushing through President Donald Trump’s widely condemned regulatory rollbacks—to ignore public records requests that officials deem too “unreasonably burdensome.”

The rule would loosen timelines for the agency to fulfill Freedom of Information Act (FOIA) requests—which journalists, advocacy groups, and others use to attain government records in the name of accountability—and increase requirements for how specific requests must be. Critics of the proposal warn it could jeopardize efforts to keep the public informed about the actions of the administration.

“They are depriving the American people of their right to know what the government is doing—they are only going to cause themselves more fights and more litigation,” Nada Culver, senior counsel at The Wilderness Society, told The Hill.

The rule was filed without an agency press release—and spokespeople declined multiple media outlets’ requests for comment, citing the government shutdown—but the Federal Register filing claimed the department has seen a 30 percent jump in requests over the past two years and such “changes are necessary to best serve our customers and comply with the FOIA as efficiently, equitably, and completely as possible.”

Outgoing Interior Secretary Ryan Zinke—who announced his resignation earlier this month while facing multiple ethics investigations—and other officials have complained about, as the filing put it, “the unprecedented surge in FOIA requests and litigation” that the agency has been fielding. Critics, meanwhile, charge that the influx is the result of the department’s operations in the Trump era.

“Interior current political appointees prefer to operate in secrecy and regard the Freedom of Information Act as a nuisance, not a responsibility,” Jeff Ruch, executive director of Public Employees for Environmental Responsibility (PEER), said in a statement. “These changes are designed to facilitate more official stonewalling and delays in producing public records, especially on fast developing news stories.”

The rule was signed by the Interior Department’s principal deputy solicitor, Daniel Jorjani—a former adviser to the Koch Brothers, who are infamous for using their fossil fuel fortune to bankroll corporate-friendly Republican politicians through their sprawling dark money network. Zinke gave Jorjani the authority (pdf) to oversee all of the agency’s FOIA requests last month.

Since the proposal has been published in the Federal Register, the public has until Jan. 28, 2019 to comment on the rule. If it is implemented as written, it will likely face multiple legal challenges. Although Zinke is leaving the agency, his deputy—ex-lobbyist and “walking conflict of interest”David Bernhardt—is expected to take over and continue the legacy of his predecessor.