“This is the least American thing a secretary of state can do. Your trip is a disgrace.” 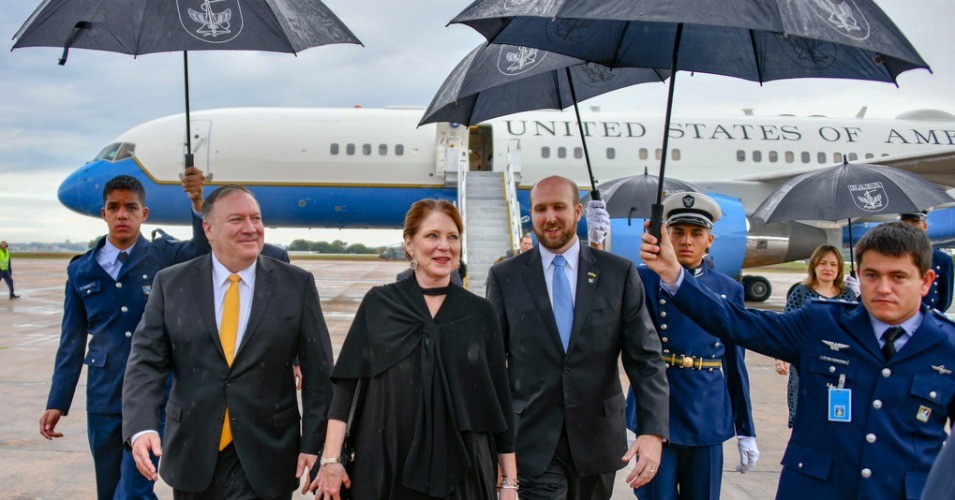 While progressives, women’s rights advocates, journalists, and the LGBTQ community were among the many mourning Brazilian President Jair Bolsonaro’s inauguration on Tuesday, U.S. Secretary of State Mike Pompeo angered critics with a celebratory tweet congratulating the proud misogynist who has defended Brazil’s former military dictatorship and vowed to crush the country’s leftist opposition during his first speech as president.

Pompeo tweeted that he was “looking forward to witnessing the peaceful transfer of power in one of Latin America’s strongest democracies,” as international observers warned that Bolsonaro’s presidency is likely to usher in a new era of fascism.

Just arrived in #Brasilia for the @jairbolsonaro inauguration. Looking forward to witnessing the peaceful transfer of power in one of Latin America’s strongest democracies. pic.twitter.com/sMuCtzsOql

“You are courting a fascist,” former White House ethics chief Walter Shaub told Pompeo on Twitter. “This is the least American thing a secretary of state can do. Your trip is a disgrace.”

Others on social media criticized Pompeo’s take on the event as well:

“One of Latin America’s Strongest Democracies”, really!?
Dear Secretary Pompeo, you are brushing the image of a fascist, and this is a disgrace! #Bolsonaro #Brazil https://t.co/7bURi0Ph7n

Even in comparison to other far-right, so-called ‘populists’ who are currently blighting global politics, #Brazil‘s #Bolsonaro is especially repugnant. An avowed racist, misogynist & homophobe. Solidarity with Brazilians opposed to such bigotry. #elenao https://t.co/UqY4Zr2dd4

At the Huffington Post, reporter Travis Waldron wrote that Bolsonaro’s presidency may well “show the world how a modern democracy collapses”:

It is possible Bolsonaro will govern as a true autocrat―that he could take advantage of any small crisis to consolidate power and sweep aside democracy in a single act. He could close Congress; he could criminalize the Workers’ Party and other leftist opposition parties and movements; he could criminalize dissent, protest, and the free press.

More likely is that he will govern in a manner similar to Trump, targeting the press, political opponent, and democratic institutions with a constant barrage of criticism that further erodes their credibility among his supporters and the public writ large, and has a chilling effect on legitimate opposition.

Bolsonaro has praised the military dictatorship that ruled Brazil from 1964 to 1985, and said in a 1999 interview, “I am in favor of torture…And the people are in favor of it, too.”

In his inaugural speech, Bolsonaro pledged to combat “the Marxist trash that has settled in educational institutions,” and his administration has already appeared to begin a crackdown on the news media, with journalists’ access to the inauguration severely restricted.

“The organization of the event is severely limiting media access in public buildings,” reported The Republic on Tuesday. “Journalists were obligated to show up seven hours before the ceremonies were to begin in the late afternoon. According to several voicing complains on Twitter, guards are seizing items they took to feed themselves as they wait, such as apples and forks because allegedly they are a risk.”

Bolsonaro’s inauguration imposes serious restrictions on journalists.
They have to stay in closed locations 7 hrs ahead of time & can’t travel between the ceremonies. According to @elpais_brasil credentials were given out randomly & news teams split up.https://t.co/OBsjDg4wZc

“One of his most influential supporters has called journalists ‘the biggest enemies of the people’ and in comments reminiscent of Trump’s repeated attacks on the media, Bolsonaro singled out Folha for particular ire and threatened to review the government’s budget for media spending,” wrote Andrew Downie of the Committee to Protect Journalists (CPJ) ahead of the inauguration.

Bolsonaro has expressed admiration for Trump while the U.S. president spoke of “a strong commitment to work side-by-side” after the new Brazilian leader was elected last fall. The alliance, further demonstrated by Pompeo’s whitewashing of the inauguration, has provoked outrage and fear among progressives in Brazil, the U.S., and around the world.

“Bolsonaro has modeled his ascent to power on the rise of Trump, whose own victory was built on years of democratic erosion. Trump, too, was merely a symptom of a larger disease, a product of declining faith among Americans in their democratic institutions,” wrote Waldron.

But as Steven Levitsky, Harvard political scientist and author of How Democracies Die, told the Huffington Post, “Bolsonaro can do things in Brazil, potentially, that Trump can’t do, because Brazilian institutions…are nowhere near as strong as they are in the United States.”