“Merkley deserves a ton of credit for his leadership here. This is good, honest, 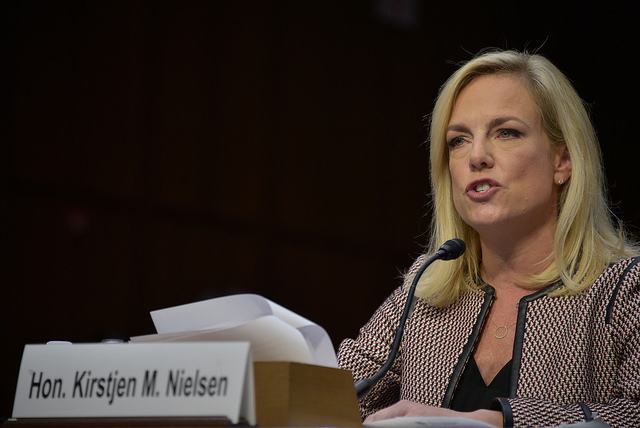 After releasing a damning draft memo that showed the Trump administration planned to “traumatize” migrant children with family separations and expedite deportation by denying asylum hearings, Sen. Jeff Merkley (D-Ore.) on Friday called for an FBI investigation into whether Homeland Security Sec. Kirstjen Nielsen lied when she testified before Congress about the policy.

In a letter sent to FBI Director Christopher Wray, the senator noted that “compelling new evidence has emerged revealing that high-level Department of Homeland Security officials were secretly and actively developing a new policy and legal framework for separating families as far back as December 2017.”

“Despite this fact,” Merkley continued, “while testifying under oath before the House Committee on the Judiciary, Secretary Nielsen stated unequivocally ‘I’m not a liar, we’ve never had a policy for family separation.'” Given the “conflicting facts,” Merkley formally demanded an immediate investigation.

I’m formally requesting that the @FBI investigate whether @SecNielsen committed perjury during her testimony under oath before @HouseJudiciary. The memo I released yesterday flat-out contradicts her statement that there was no child separation policy. https://t.co/Bj6FDsACv6 pic.twitter.com/KJBxp5A06O

In addition to her comments before the House committee, Nielsen made similar proclamations to the public, such as when she tweeted last summer: “We do not have a policy of separating families at the border. Period.” Her statement was quickly denounced by critics as a “heinous lie.”

We do not have a policy of separating families at the border. Period.

Merkley, meanwhile, has been praised for his consistent condemnation of the Trump administration’s so-called “zero tolerance” policy, under which federal officials forcibly separated thousands of migrant children from their parents. The senator was lauded Friday for both releasing the 2017 memo and urging Wray to open a probe into Nielsen.

“Merkley deserves a ton of credit for his leadership here,” concluded Indivisible co-founder Ezra Levin. “This is good, honest, careful work in response to cynicism, cruelty, and lies.”