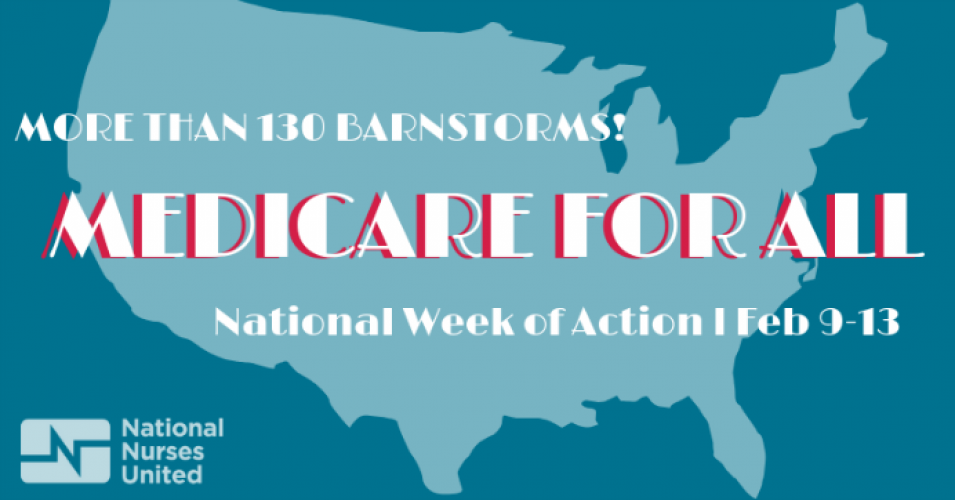 As NNU executive director Bonnie Castillo explained, “The barnstorms are about harnessing that momentum and continuing to build it out even further, into every community, conversation by conversation, neighbor by neighbor—until the people’s will for Medicare for All becomes the political will to get it done.”

At the events, according to organizers, “you’ll gather with volunteers near you, talk about the plan to win, and begin organizing to knock doors, make phone calls, and more in your community.” Find an event in your community here.

Medicare for All is the most practical, cost-efficient way to provide a single standard of quality care to all.

Join the fight to win #MedicareForAll by attending a barnstorm near you as part of the national week of action Feb. 9-13.

Recent polling has shown that 70 percent of Americans support a Medicare for All system called for by Sen. Bernie Sanders (I-Vt.) and a growing number of Democrats in Congress. The barnstorms come as Rep. Pramila Jayapal (D-Wash.) is set to introduce the Medicare for All Act of 2019 in the House as early as next week.

Not only is a single-payer system increasingly popular with the public and progressive lawmakers, it also is expected to dramatically improve Americans’ healthcare experiences. A new Public Citizen analysis, as Common Dreams reported Monday, found that Medicare for All would “significantly cut healthcare costs, increase systemic efficiency, and improve coverage—while expanding it to everyone.”

As patients and healthcare providers nationwide can attest, for those who are living with dire conditions but struggle to afford high quality care, the proposed overhaul can’t come quickly enough—which has inspired some of them to join the grassroots movement for Medicare for All.

Briana Moss’ fight to maintain insulin for her Type I diabetes motivated her to host the Dubuque, Iowa barnstorm, according to a statement from NNU.

“I know people with diabetes literally dying because they cannot afford their insulin… In what should be the greatest country in the world, there’s no excuse for this,” Moss said. “Profiting off sick people is sick.”

Emily Hibshman, who is hosting the Allentown, Pennsylvania barnstorm, emphasized the importance of pressuring elected officials to support a rapid transition away from the existing for-profit system.

“I want people who support incremental change in the existing system to think about who will be hurt by continuing to do that,” she said. “Any Democratic politician worth their salt needs to get behind Medicare for All. People want it. If you’re not behind it, you need to get out of office.”

7 out of 10 Americans agree: our current, for-profit health care system isn’t working. It’s time to guarantee health care as a right with Medicare for All.

Find out how you can join a Medicare for All National Week of Action barnstorm near you: https://t.co/OpzlXkTDus pic.twitter.com/5VxJMyLGeW

As Castillo wrote in an op-ed for The Hill on Wednesday: “Try as elected officials might to pledge allegiance to both corporations and to people, it won’t work that way. Not anymore. Our patients’ lives and life savings will either continue being sacrificed—or there will be guaranteed healthcare as a human right. The Affordable Care Act (ACA) has already served as a great example of the fact that there is no workable in-between.”

In a similar vein, Heather Gautney, executive director of Our Revolution, wrote this week that “if Democrats are serious about defeating [President] Donald Trump in 2020, they cannot continue to play footsie with drug and insurance companies and allow them to exploit our sick and our elderly.”

NNU co-president Jean Ross, RN, urged supporters of the transition to keep up pressure on federal lawmakers, and called on members of the U.S. House to schedule hearings for the forthcoming Medicare for All legislation. “The healthcare and insurance industries may be able to buy politicians and the media,” she said, “but they will never be as persuasive as our thousands of volunteers.”

“In honor of our patients who have paid the ultimate price in this deadly system,” Ross concluded, “we know we can’t wait any longer—and together, with all of the working people and allies standing up this week and beyond, we will see that Medicare for All makes it across the finish line.”