“As nurses, we understand the need for guaranteed healthcare for everyone. That’s why we are fighting to win Medicare for All and joining thousands at barnstorms across the country.” 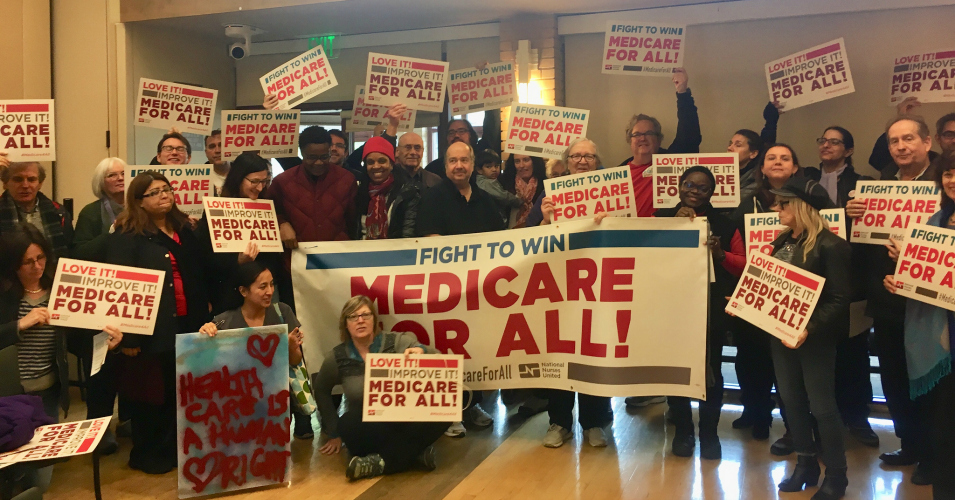 With Rep. Pramila Jayapal (D-Wash.) expected to introduce the Medicare for All Act of 2019 in the coming days, nurses, progressive activists, and ordinary people who have felt firsthand the crushing weight of America’s for-profit healthcare system took part in nationwide “barnstorms” this weekend to build grassroots support for transformative change.

From Texas to Kansas to California—around 150 total locations across the country—Medicare for All supporters gathered to discuss the necessity of a single-payer system that leaves no one behind, at a time when over 30 million Americans are uninsured and two-thirds of personal bankruptcies are caused by medical bills.

“I know of people with diabetes literally dying because they cannot afford their insulin. It’s very scary and very real,” said 30-year-old Medicare for All organizer Briana Moss, who was diagnosed with type 1 diabetes at the age of 12.

“We are so far behind,” she added. “I feel so passionate about this movement and winning Medicare for All. People shouldn’t be going bankrupt and dying. We’re the generation that’s going to get this done.”

I 👏 believe 👏 that 👏 we 👏 will 👏 win! 👏#MedicareForAll activists in Boston, Massachusetts are fired up to organize for universal health care.

Don’t miss out on this historic National Week of Action. Find a barnstorm near you: https://t.co/50AR7UH8Af #singlepayer pic.twitter.com/zyGuXPqAax

In addition to answering the “why” question, the Medicare for All week of action—which will continue through Feb. 13—is also aimed at detailing how to win support for single-payer at the local level, as more and more members of Congress sign on to the bold proposal.

“Next steps involve knocking on doors, phone banks—various ways of engaging our communities to get involved,” said NNU executive director Bonnie Castillo, RN. “As nurses, we understand the need for guaranteed healthcare for everyone. That’s why we are fighting to win Medicare for All and joining thousands at barnstorms across the country over the next few days.”

Emily Hibshman, who organized a barnstorm in Allentown, Pennsylvania, argued that the “great thing about Medicare for All is that you don’t just have to be progressive to support it, any average person will benefit from this.”

According to recent polling, 52 percent of Republican voters—and 70 percent of Americans overall—support Medicare for All.

“That’s where the power lies, in building a mass movement of all people,” Hibshman said. “Through recruitment efforts, we can make people understand, they have the power to make this happen. We don’t have to resign ourselves to centrist politicians. We can take back our power!”

Amazing day of barnstorms with people across the US organizing for #MedicareForAll.

Folks are gathering to talk about the plan to win guaranteed #healthcare.

Next steps involve knocking on doors, phone banks — various ways of engaging our communities to get involved. pic.twitter.com/HLj2uykYh3

Barnstorms are kicking off in 150 locations across the country as part of the #MedicareForAll National Week of Action.

NNU’s Medicare for All week of action comes amid historic momentum for Medicare for All at the national level, with several 2020 presidential candidates expressing support for the plan as it is set to have its first-ever congressional hearings in the coming weeks.

But this surge in national attention has come with significant risks.

As Common Dreams reported, single-payer advocates have raised alarm that some politicians are using Medicare for All as a mere slogan—rather than a specific, concrete proposal—while pushing watered down public option alternatives that would leave intact some of the most harmful components of the for-profit system.

“The dilution of improved Medicare for All remains the greatest threat to guaranteeing healthcare for all,” Michael Lighty, a founding fellow of the Sanders Institute, told Common Dreams. “Without eliminating all barriers to care—starting with the huge out-of-pocket costs workers must pay—we cannot create a just healthcare system.”

Writing for Common Dreams last week, Healthcare-NOW executive director Benjamin Day and Labor Campaign for Single-Payer Healthcare national coordinator Mark Dudzic expressed confidence that the legislation Jayapal is set to release as early as this coming week “will reflect the values of the healthcare justice movement.”

“We have been involved in extensive briefings and consultations with Jayapal’s staff and we want to… express our confidence that it is shaping up to be a much stronger and more detailed piece of single-payer healthcare legislation than the bills submitted in the last Congress,” Day and Dudzic wrote.

“As our momentum grows, we will be facing the concentrated power of the Medical Industrial Complex whose tentacles reach into almost one fifth of the U.S. economy. In addition, we will be confronted with a Democratic establishment intent on diluting and undermining our vision,” they concluded. “We will need all hands on deck to fight this two-front war.”