“This is the stuff that worries me most. We don’t know what we’re doing, not trying to stop it, [and] with big consequences we don’t really understand.” 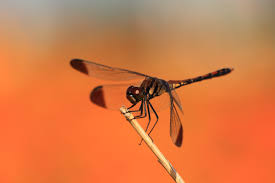 The first global scientific review of its kind reaches an ominous conclusion about the state of nature warning that unless humanity drastically and urgently changes its behavior the world’s insects could be extinct within a century.

Presented in exclusive reporting by the Guardian‘s environment editor Damian Carrington, the findings of the new analysis, published in the journal Biological Conservation, found that industrial agricultural techniques—”particularly the heavy use of pesticides”—as well as climate change and urbanization are the key drivers behind the extinction-level decline of insect populations that could herald a “catastrophic collapse of nature’s ecosystems” if not addressed.

“If insect species losses cannot be halted, this will have catastrophic consequences for both the planet’s ecosystems and for the survival of mankind,” report co-author Francisco Sánchez-Bayo, at the University of Sydney, Australia, told the Guardian. Sánchez-Bayo wrote the scholarly analysis with Kris Wyckhuys at the China Academy of Agricultural Sciences in Beijing.

Calling the current annual global insect decline rate of 2.5 percent over the last three decades a “shocking” number, Sánchez-Bayo characterized it as “very rapid” for insects worldwide. If that continues, he warned: “In 10 years you will have a quarter less, in 50 years only half left and in 100 years you will have none.”

Isn’t this a bit alarmist? Anticipating that concern, Sánchez-Bayo said the language of the report was intended “to really wake people up,” but that’s because the findings are so worrying.

Not involved with the study, Professor Dave Goulson at the University of Sussex in the UK, agreed. “It should be of huge concern to all of us,” Goulson told the Guardian, “for insects are at the heart of every food web, they pollinate the large majority of plant species, keep the soil healthy, recycle nutrients, control pests, and much more. Love them or loathe them, we humans cannot survive without insects.”

The planet is at the start of a sixth mass extinction in its history, with huge losses already reported in larger animals that are easier to study. But insects are by far the most varied and abundant animals, outweighing humanity by 17 times. They are “essential” for the proper functioning of all ecosystems, the researchers say, as food for other creatures, pollinators and recyclers of nutrients.

Insect population collapses have recently been reported in Germany and Puerto Rico, but the review strongly indicates the crisis is global. The researchers set out their conclusions in unusually forceful terms for a peer-reviewed scientific paper: “The [insect] trends confirm that the sixth major extinction event is profoundly impacting [on] life forms on our planet.”

Doug Parr, the chief scientist for Greenpeace U.K., responded to the reporting by saying these are the climate-related developments that concern him most of all.

“I spend so many hours a week concerned climate change,” he said in a tweet linking to the story. “But this is the stuff that worries me most. We don’t know what we’re doing, not trying to stop it, [and] with big consequences we don’t really understand.” 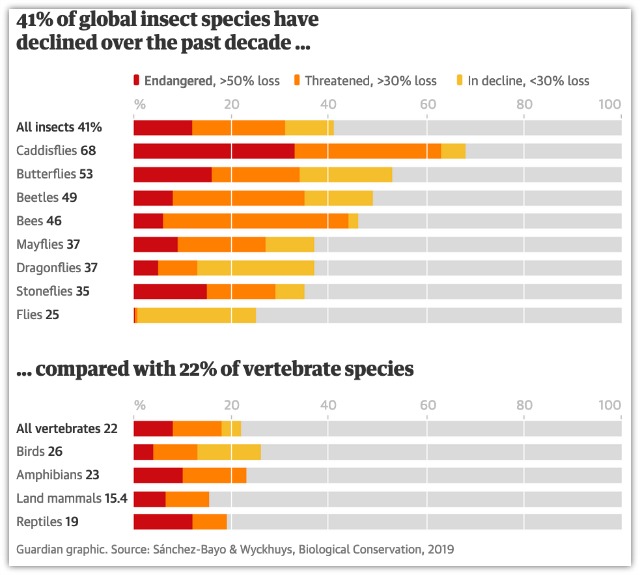 According to Sánchez-Bayo, the “main cause of the decline is agricultural intensification,” and he put special emphasis on new classes of pesticides and herbicides that have been brought to market over the last twenty years alongside a global surge in industrialized monocultures. “That means the elimination of all trees and shrubs that normally surround the fields, so there are plain, bare fields that are treated with synthetic fertilizers and pesticides,” he said.

As campaigners worldwide intensify their collective demand that elected leaders, governments, communities, and businesses do significantly more to address the crisis of a warming planet and halt the destruction of the Earth’s natural systems, journalist David Sirota contrasted evidence of species loss—and the threat it contains—with those voices who say something like a Green New Deal would somehow be “too expensive” or disruptive to the status quo:

Very Serious Pundits & Political Experts: The #GreenNewDeal is too expensive