As MintPress noted at the time, many Haitians believed that the men were part of a team of mercenaries hired by Haitian President Joven Moise. One of the men, Chris Osman, wrote on Instagram on Friday that they were operating “for people who are directly connected to the current President”

Osman was among five Americans, two Serbs, and one Haitian arrested by Haitian authorities. He is a former Navy SEAL and another one of the men, Christopher McKinley, was also a SEAL. Kent Kroeker, another one of those arrested, was a Marine Corps pilot, and Talon Burton is a former U.S. Army military policeman, State Department security guard, and Blackwater operative.

The remaining American, Dustin Porte, is a private security contractor and president of an electrical contracting company called Patriot Group Services, which has a $16,000 subcontract with the Department of Homeland Security.

Video of 7 US citizens and a Haitian being held at main police station in downtown PAP, #Haiti. They were detained after a cache of automatic weapons, communications equipment and several license plates were found in their vehicles. Why they were stopped is unknown. pic.twitter.com/YvCxaULWIo

After the men were arrested, Haitian Minister of Justice Jean Roody Aly authorized the extradition of the Americans to face trial in the United States, according to a letter from Aly obtained by the Miami Herald. But upon their arrival in Miami, it became clear that they would not face charges in the U.S. Federal sources confirmed as much to the Herald.

“The fact that the U.S. took these people and did not charge them, it shows there was a conspiracy. They didn’t want them to go before Haitian justice,” Pierre Esperance, who runs the National Human Rights Defense Network in Haiti, told the Herald.

On Thursday, Haiti’s Senate ordered the government security council to answer questions about the incident. The council is headed by Prime Minister Jean Henry Céant. According to a senator who spoke with him, the men planned to break into the central bank and then assassinate Céant.

U.S. authorities initially intervened after Céant told CNN that the group were “mercenaries” and “terrorists,” securing the group’s release before their court appearances.

“We were being used as pawns in a public fight between [President Moise] and the current Prime Minister of Haiti,” Osman said on Instagram. “We were not released, we were in fact rescued.”

Apparently dissatisfied with his position after being “rescued” from the fallout of the international incident he participated in, Osman complained: “My days of doing any out of the U.S. is [sic] officially over because I’m plastered all over media around the world.”

Still, Osman thanked “the American government, the State Department, the U.S. Embassy in Haiti, The American Ambassador to Haiti and the hundreds of men and woman who stepped in to save us.” 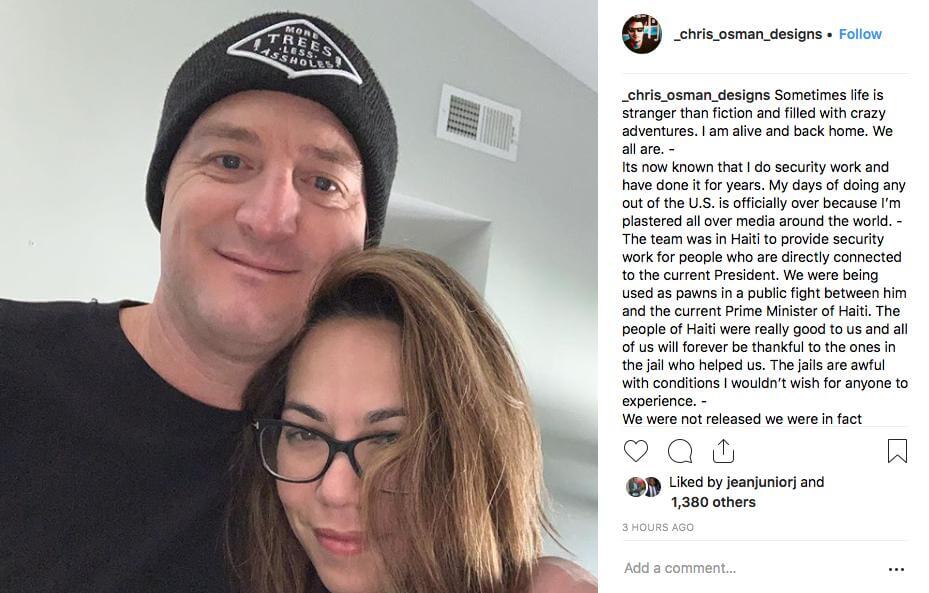 Protests had quieted after 10 days of intense conflict in Haiti, but the release of the mercenaries has renewed the anger of the opposition, multiple media outlets report.

A Haitian media personality on board the flight from Haiti to Miami that transported the mercenaries told the U.S. military veteran publication Task & Purpose that they were escorted off by government officials wearing “navy blue uniforms with what looked like the Homeland Security badge on their shoulders.”

However, it isn’t clear whether that was the case, as Homeland Security’s Customs and Border Patrol did not respond to Task & Purpose’s request for comment, while “the City of Miami Police Department, Miami-Dade Police Department, the FBI, TSA, and the U.S. Marshal’s Service” all denied involvement.