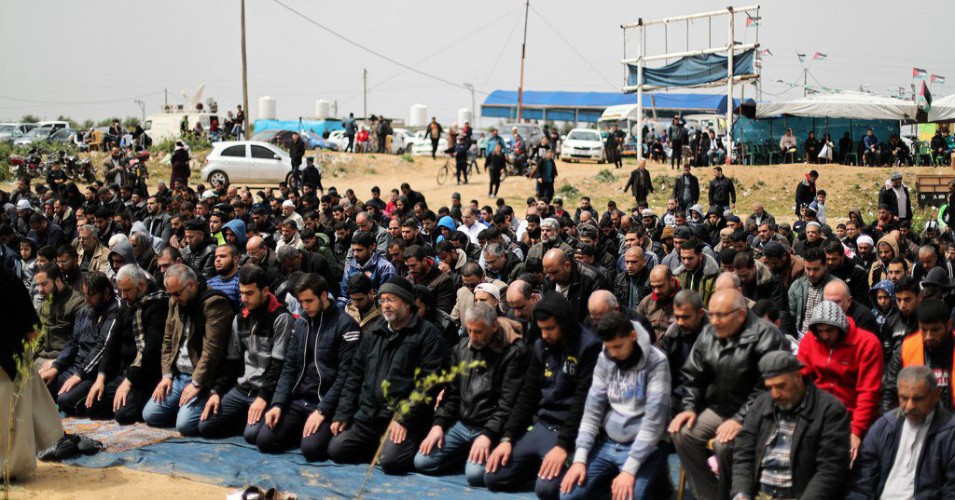 “Thirty-three Palestinians have been evacuated to hospitals in the Strip, including ten that were wounded by live Israeli fire at the border,” Haaretz reported. “Dozens were treated in field clinics erected in tents near the border.”

Thousands of Palestinians in Gaza March in protest commemorating #LandDay and marking 1 year of weekly marches in the Great Return March demand their basic rights even as Israeli snipers are waiting ready to gun them down. pic.twitter.com/Vq8NoKFIqu

During today’s #GreatReturnMarch protests, people in #Gaza also aim to send a loud clear message to the world and call for ending the inhumane siege which #Israel imposed for 12 years now. pic.twitter.com/AmFh9zgcs7

In case you aren’t paying attention Israel is shooting live ammunition in Gaza.

As Yara Hawari wrote for Middle East Eye, “Protests at the Israeli fence enclosing the territory began on 30 March 2018 to commemorate Land Day, which marks an incident in 1976 when Israeli police shot and killed six Palestinian citizens of Israel who were protesting the expropriation of thousands of dunams of Palestinian land.”

Last year’s protest led to weekly demonstrations each Friday, during which Palestinians have marched to the border fence to demand dignity and an end to occupation.

The mostly peaceful protests have been met with deadly force by the Israeli military, which has killed more than 200 Palestinian demonstrators and injured thousands more over the past year.

In a report published last month, the United Nations said Israel’s use of lethal force against unarmed demonstrators may amount to “war crimes or crimes against humanity.”

“These marches are symbolic of the refugees’ strong will to return, and of how they haven’t adapted to this reality of being refugees.”

“One year on, the Great March of Return protests have become a manifestation of ultimate despair,” wrote Hawari. “The effects of the siege and occupation have left more than half of Palestinians in Gaza living in abject poverty, many with serious mental and physical health conditions.”

“While despair in Gaza continues, so too does the dream of returning home,” she concluded. “This past year, however, has shown us that the costs will be high—particularly if Israel continues to violate Palestinian rights without consequences.”