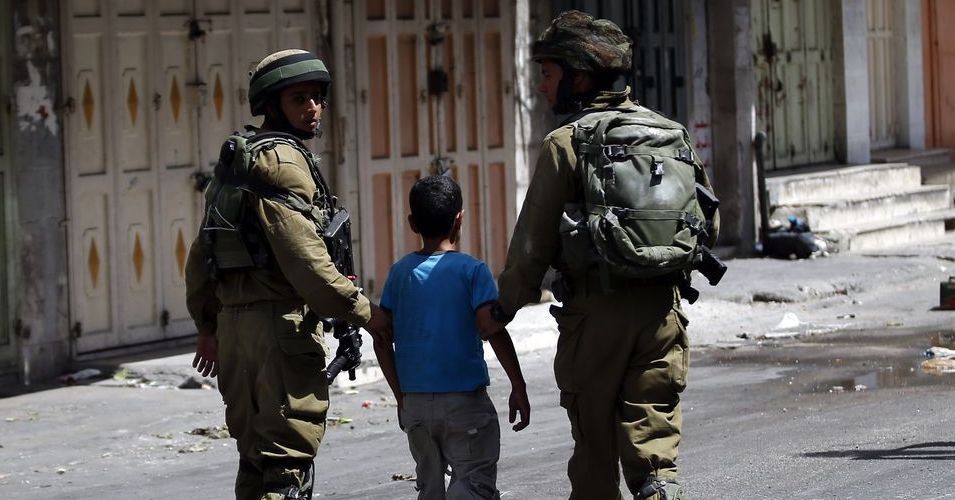 McCollum said in a statement Wednesday that the Israeli military’s practice of kidnapping and abusing children was morally wrong.

“Israel’s system of military juvenile detention is state-sponsored child abuse designed to intimidate and terrorize Palestinian children and their families,” said McCollum. “It must be condemned, but it is equally outrageous that U.S. tax dollars in the form of military aid to Israel are permitted to sustain what is clearly a gross human rights violation against children.”

I just introduced H.R. 2407, the Promoting Human Rights for Palestinian Children Living Under Israeli Military Occupation Act, to prohibit funding for the military detention of children in any country, including Israel. https://t.co/5UkSnNTs5H

At The Intercept, reporter Robert Mackey put the treatment of Palestinian children into perspective:

Israel’s military typically arrests and prosecutes 500 to 700 Palestinian children between the ages of 12 and 17 each year, subjecting them to coercive interrogation, physical violence, and trials in military courts that lack basic guarantees of due process.

H.R. 2407 (pdf) aims to change that. The bill, which was referred to the House Committee on Foreign Affairs after being introduced, would amend the Foreign Assistance Act—the so-called “Leahy Law” that prohibits funding for countries that regularly violate human rights—to disallow funding to go to the detention of children.

Specifically, the bill calls for “no funds authorized to be appropriated for assistance to a foreign country may be used to support the military detention, interrogation, abuse, or ill-treatment of children in violation of international humanitarian law.”

This is McCollum’s second time attempting to pass legislation that prioritizes care for Palestinian children by amending the Leahy Law. In the last session of Congress, McCollum introduced similar legislation only to see it die in committee after garnering the support of 30 co-sponsors.

The new bill, as Josh Ruebner reported Wednesday at  Mondoweiss, is stronger and more direct in its approach to dealing with the responsibility of the U.S. to the victims of Israeli behavior.

The bill is also seminal in that it calls out U.S. complicity in Israel’s commission of human rights abuses of Palestinian children, something which the previous version omitted. “The United States provides in excess of $3.8 billion in annual foreign military assistance to the Government of Israel,” the bill notes, “which enables the military detention and abuse of Palestinian children by Israel’s military system of juvenile detention.” This is an exceedingly rare, if not unique, recognition in Congress of the deleterious impact of US taxpayer-funded weapons on Palestinians living under Israeli military occupation.

“Progressive values demand freedom, justice, and equality for all people and across all issues,” said Yousef Munayyer, the executive director for the U.S. Campaign for Palestinian Rights, “and we commend Rep. McCollum for putting hers into practice.”

Jewish Voice For Peace deputy director Rabbi Alissa Wise made an appeal to morality for support of the bill.

“Palestinian children—like all children—should be protected and treasured,” said Wise. “It is unconscionable that U.S. military aid to Israel is enabling the Israeli military’s systematic abuse of Palestinian children; beatings, solitary confinement, and arbitrary detention are no way to treat a child.”

“By prohibiting U.S. financial support of abuses against Palestinian children in the Israeli military detention system, this bill aligns U.S. policy toward Israel with existing U.S. law and international law, sending a clear message to Israeli authorities that the systemic impunity enjoyed for so long concerning widespread ill-treatment of Palestinian child detainees must end,” Parker told The Intercept‘s Mackey.

Dr. Osama Abuirshaid, the executive director of American Muslims of Palestine, likened the discussion to that of the Trump administration’s immigration policies.

“If we can have a debate here in the U.S. over the ill treatment of immigrants on our southern border and Trump’s inhumane family separation policy,” said Abuirshaid, “then we should be able to have the same debate in relation to Israel’s abuses of Palestinian children and families, also funded by our tax dollars.”

In her statement, McCollum said that the tide is finally turning against the Israeli treatment of the Palestinians. She added her hope that her bill could change that.

“Peace can only be achieved by respecting human rights,” said McCollum, “especially the rights of children.”