“For too long we have allowed our schools to go underfunded while taking the blame for the host of issues that come with that.” 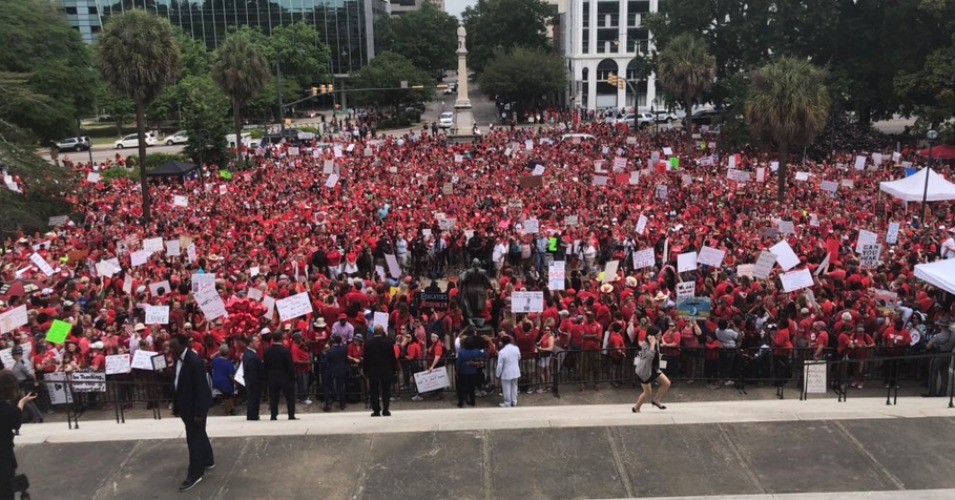 About 10,000 teachers gathered on the steps of the South Carolina state Capitol in Columbia on Wednesday to demand more school funding, smaller class sizes, and fair pay. (Photo: @ninaturner/Twitter)

Demanding an end to austerity measures that have kept classrooms overcrowded and educators underpaid, about 10,000 teachers, students, and supporters staged one of the largest protests in recent years at the South Carolina Statehouse in Columbia on Wednesday.

Led by the grassroots group SC for Ed, teachers from across the traditionally deep red state took personal days to stage the walkout. The protest is aimed at forcing the Republican-controlled legislature to fund higher wages and more hiring in order to reduce class sizes and staff schools with support staff.

“For too long we have allowed our schools to go underfunded while taking the blame for the host of issues that come with that,” SC for Ed said in a statement Wednesday. “We hope the state of South Carolina will commit to starting over the process of reform with current classroom teachers at the table.”

Many of the teachers chanted, “We teach, we vote” as they marched to the Statehouse Wednesday morning.

Look who walked with me today! I am so fortunate to be their teacher! We see who’s listening! We teach, we vote! @SCforEd #AllOutMay1 #scfored #iloveecon pic.twitter.com/DOfFCaKZWP

The sleeping giant in SC politics is awake and pissed off!!! Teachers are the most powerful force in our communities and they are demanding to be treated fairly and to be treated as professionals! #AllOutMay1 #SupportOurTeachers #JoinJaime pic.twitter.com/saNHeq4TTV

Former educator Sariah McCall, who cited a chronic lack of resources when sheresigned from her job at Charleston County School District in November, was among the speakers at the rally.

“The public has to demand that they receive the time, funding, and resources they require,” McCall wrote. “We need to prioritize education, not just offer it lip-service. Until enough people decide that this is worth making a fuss over, those that are in power have no reason to listen to our hurt, pleas, and fears to make any changes.”

“I cannot support teachers walking out on their obligations to South Carolina students, families, and the thousands of hardworking bus drivers, cafeteria workers, counselors, aides, and custodial staff whose livelihoods depend on our schools being operational,” Spearman said Monday.

Spearman’s statement reportedly struck a nerve with educators across the state, leading to a larger-than-expected turnout.

Some teachers have told me they believe the huge crowds today is a result of SC Superintendent Molly Spearman saying she can’t support teachers who are “walking out on their obligations” to students. Whatever the reason, the turnout is of historic proportions. pic.twitter.com/E2AG3qYjVV

Wednesday’s protest marked the second time this year that South Carolina teachers have walked out of their classrooms to decry their chronically low pay and overcrowded schools. In January many teachers took a day off work to lobby at the Statehouse for a 10 percent pay raise.

South Carolina teachers are paid an average of $50,000 per year, with entry-level teachers earning as little as $32,000. The state ranks 38th in the nation for teacher salaries.

According to the Charleston Post and Courier, the state has not enforced class size limits since 2010, a continued oversight reportedly stemming from the Great Recession.

“Between 2008 and 2018, the number of schools where the average classroom size exceeded 28 students per teacher almost doubled to 110 from 60,” the Post and Courier reported earlier this year.

“Right now, it feels like in order to save money people put as many students in a classroom as they can,” Dottie Adams, middle school science teacher in Columbia, told the newspaper.

In Raleigh, North Carolina, thousands of teachers also held a May Day rally for the second year in a row, calling for more support staff, a five percent raise for teachers, and a minimum wage of $15 for all school staff.

Several 2020 Democratic presidential candidates voiced their support for educators in both states and across the country.

I stand with South Carolina teachers who are walking out for fairer pay, smaller classroom sizes, duty-free break time and full funding of the state’s promises to students. We need to treat educators with respect and dignity. #AllOutMay1 https://t.co/K8RpgUarw9

Today, teachers in South Carolina are marching for fair wages and improved working conditions. I stand with them. As president, I will raise the average teacher pay in South Carolina by 19%, reduce teacher turnover, and ensure our teachers are paid their worth. #SCforEd

Our schools are understaffed. Our school systems are under-resourced. Our teachers are underpaid and disrespected. I support the thousands of teachers in North and South Carolina who are standing up for our students today and every day. #AllOutMay1 #RedForEd https://t.co/0g05fKYICT