“Attacking [Venezuela] for any reason,” warned one legal expert, “would violate the most fundamental of all international law.” 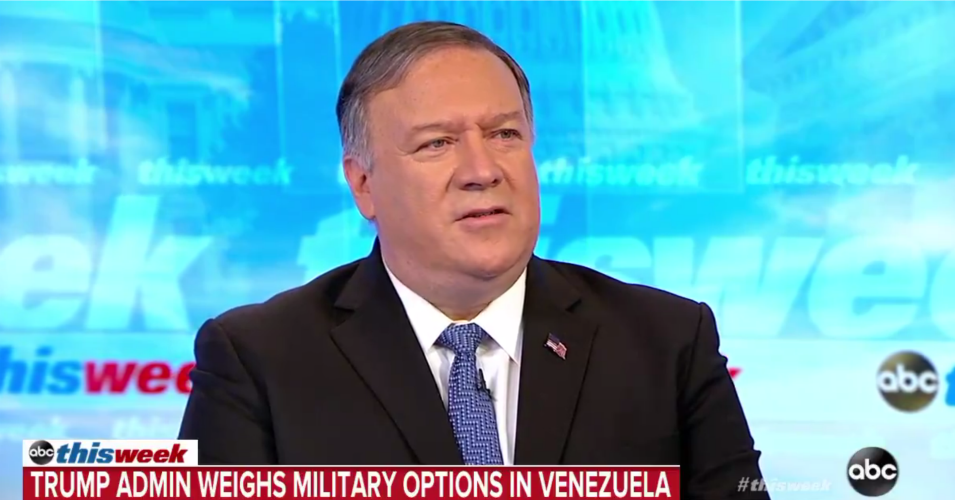 U.S. Secretary of State appearing on ABC’s “This Week” on Sunday morning. “Attacking [Venezuela] for any reason,” warned international law scholar Mary Ellen O’Connell earlier this year, “would violate the most fundamental of all international law — the prohibition on the use of force. International law permits force in response to an armed attack in self-defense, but not for regime change, to secure oil or even to distribute food.” (Photo: ABC/This Week)

After U.S. Secretary of State Mike Pompeo said Sunday morning that President Donald Trump has a “full range of options” when it comes to possible next moves against Venezuela, anti-war critics are wondering what the Democrats in Congress are prepared to do in order to curtail the administration’s ongoing threat of using military force to overthrow the government of President Nicolas Maduro – an effort international legal experts say would be a violation of international law.

“We have a full range of options that we’re preparing for,” Pompeo said on ABC’s “This Week.”

Asked if the president believed he had the authority to attack Venezuela without the expressed approval of Congress, Pompeo said, “I don’t want to speak to that,” but added that the President Trump has “his full range of Article 2 authorities”—referring to the section of the Constitution that grants the president specific (yet not unlimited) powers—”and I’m very confident that any action we took in Venezuela would be lawful.”

NEW: Asked if Trump believes he could intervene militarily in Venezuela without Congress’ approval, Mike Pompeo says, “The president has his full range of Article 2 authorities and I’m very confident that any action we took in Venezuela would be lawful” https://t.co/PWsqOVOMif pic.twitter.com/4Y0yWeiQzJ

The White House has been adamant that a military option remains on the table for Venezuela. Earlier this week—as the latest push to topple Maduro from within failed—Pompeo, as Common Dreams reported, said Trump was prepared to use military force “if that’s what’s required.”

In the wake of Pompeo’s latest comments on Sunday, journalist and political commentator Glenn Greenwald asked why Democratic leaders in the House were not acting with more urgency in terms of pushing back against the White House’s aggressive posture and threats against Venezuela.

Why isn’t the House leadership proposing a bill that would bar Trump from using military force in Venezuela without first obtaining authorization from Congress – you know, the way the Constitution requires? https://t.co/nwQShQrS77

While leadership has not yet embraced it or made the bill a priority, Rep. David Cicilline (D-RI) has introduced a proposal that would specifically prevent the Trump administration from deploying U.S. military forces to Venezuela without congressional authorization.

I introduced H.R.1004 to prevent American military action in Venezuela.

Congress should pass this bill before we rush into another unnecessary war.

In a statement early last week, Cicilline castigated Trump’s national security advisor John Bolton for again threatening that the administration was willing to use military force in order to help overthrow the Maduro government.

“To be clear, there is no good military option for the U.S.,” Cicilline said. “And if the President and his advisors want to go down that road, they will need to request authority from Congress. Only Congress has the power to declare war and we haven’t done that. Any rhetoric to the contrary, like Mr. Bolton’s comment today, is both dangerous and wrong.”

Of course, as international law experts would be quick to point out, authority granted by the U.S. Congress might absolve Trump of constitutional violations, it would still not satisfy the legal standard for the use of military force by one nation against another.

As Trump made similar threats against Venezuela earlier this year, Mary Ellen O’Connell, Notre Dame Law School professor and renowned expert on international law, said there are serious concerns regarding the rhetoric of “all options remain on the table”—code for military action.

“Attacking [Venezuela] for any reason,” O’Connell said in February, “would violate the most fundamental of all international law — the prohibition on the use of force. International law permits force in response to an armed attack in self-defense, but not for regime change, to secure oil or even to distribute food.”

O’Connell argued that “regardless of how odious Maduro is,” that judgment alone cannot justify his overthrow by outside forces. “Under international law, he is treated as the head of government,” she said. “The fact the U.S. and other states have recognized opposition leader Guaidó as the legitimate president is irrelevant for these purposes. Guaidó must win the support of the military and other Maduro backers to govern. It is governing that matters, not the preferences of outside states.”

And she rejected the idea that even humanitarian arguments would warrant U.S. military action. “There are no ‘humanitarian wars,'” she explained. “Nor is military confrontation a way to promote good governance and the rule of law. The U.S. has become so accustomed to using military force — from full-scale invasions to constant drone attacks — we don’t seem to be able to think of anything else to do.”