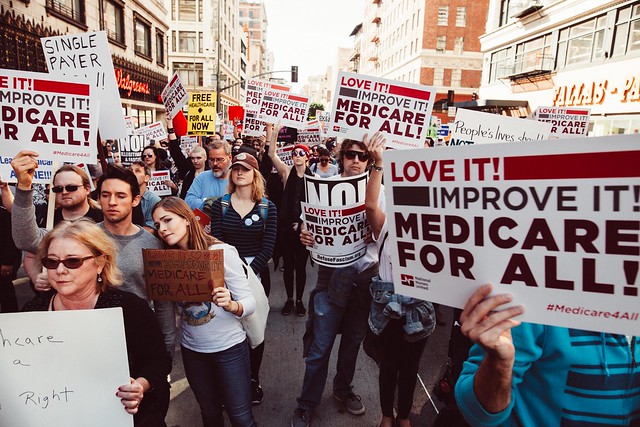 The AMA is America’s largest association of physicians, one of the largest lobbying organizations in the U.S., and a founding member of the Partnership for America’s Health Care Future, a coalition formed by insurance and pharmaceutical interests to combat Medicare for All.

On Saturday, medical professionals dressed in their scrubs and white coats intend to rally at the AMA’s gathering at the Hyatt Regency in Chicago to make clear that the organization’s anti-Medicare for All stance does not represent the view of all—or even most—physicians and nurses.

“So tomorrow,” Gaffney said, “we’re calling on the AMA to join us in the fight for a better, more just healthcare system for everyone.”

In an op-ed for The Guardian on Thursday, a group of medical students and organizers planning to take part in Saturday’s march wrote that while the “AMA claims to represent the interests and values of our nation’s doctors… it has long been the public relations face of America’s private health insurance system, which treats healthcare as a commodity.”

“Medical students and professionals have had enough,” the group added. “This Saturday’s protest is only one example.”

In a 2017 survey, physician recruitment firm Merritt Hawkins found that 56 percent of doctors either strongly or somewhat support a single-payer system.

Alluding to that data, Gaffney tweeted that the “AMA is not speaking for the American medical profession when it comes to healthcare reform.”

“It’s time for the AMA to leave the Partnership for America’s Health Care Future,” Gaffney said in a statement, “and join the majority of physicians who support improved Medicare for All.”

Tomorrow, I’ll be joining physicians, medical students, nurses, & activists in a demonstration outside the annual meeting of the American Medical Association. @PNHP, @NationalNurses, @DemSocialists, @Public_Citizen, and many other groups have joined together for this moment.

We are also calling on the AMA to abandon its opposition to Medicare for All—indeed, to support it. Polls have shown that a majority of the nation’s doctors support single-payer: the AMA is not speaking for the American medical profession when it comes to healthcare reform.

Bill Bianchi, a member of progressive organization People’s Action who plans to take part in Saturday’s protest, wrote Friday that the AMA’s opposition to Medicare for All “is rotten to the core.”

“You’d think the nation’s largest association of doctors—whose stated goal is ‘the betterment of public health’—would want patients to get care. But the AMA has opposed every major effort to expand health access since 1917,” Bianchi wrote. “We demand that you and the other members of the Partnership for America’s Health Care Future step out of the way of Medicare for All. We are going to win care for every American, with or without you.”

The march on the AMA’s gathering will come as Rep. Pramila Jayapal’s (D-Wash.) Medicare for All Act of 2019 gains momentum in the House.

On Tuesday, Assistant House Speaker Ben Ray Luján (D-N.M.) became the highest-ranking House Democrat yet to sign on to Jayapal’s bill, bringing the total number of co-sponsors to 112.

Medicare for All is also set to get a historic moment in the spotlight next week, with the House Ways and Means Committee scheduled to hold its first-ever single-payer hearing on Wednesday.

As The Hill reported, the “June 12 hearing will mark the first time the proposal is considered by a committee that has jurisdiction over healthcare issues.”

“It’s the biggest congressional hearing to date,” NNU wrote in an email to supporters on Thursday. “All of the funding and policies for Medicare for All will ultimately be decided by this committee.”

Noting that 13 of the Democrats on the powerful committee have not signed on to the Medicare for All Act, NNU urged the public to dial up pressure on committee members ahead of next week’s hearing.

If your member of Congress is on this list, they’re on the @WaysMeansCmte and have yet to cosponsor #MedicareForAll. And they need to hear from you today!

Call 202-858-1717 right NOW and let them know that constituents are counting on them to fight for #healthcare justice! pic.twitter.com/uj0JYOW0Pz

“This is no time for half-measures or watered-down proposals,” NNU said. “More than 70 million Americans are uninsured or underinsured, and we can’t let Congress maintain a status quo when so many lives are on the line.”