“We must show up in person to deliver a prophetic indictment.” 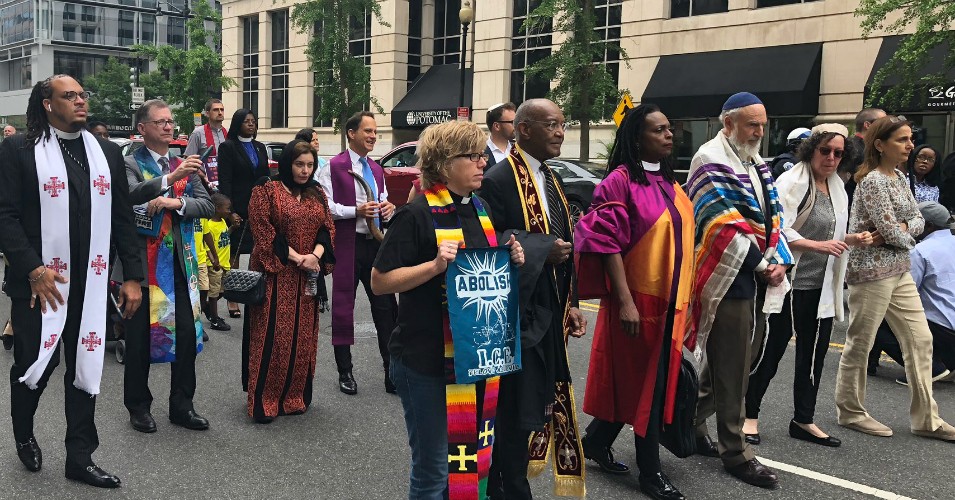 Religious leaders walk towards the White House on Wednesday as part of the “Moral Witness Wednesday” protest against the Trump administration. (Photo: AFSC via Twitter)

Hundreds of interfaith leaders stood ready to face arrest outside the White House on Wednesday where they delivered a “moral indictment to an immoral administration.”

“Your administration, your enablers & your court chaplains are under indictment!” @RevDrBarber & faith leaders unite at the White House to deliver a message of morality to an immoral administration. #MoralWitnessWednesday pic.twitter.com/FQsH6aO41l

The march and rally, dubbed Moral Witness Wednesday, was organized to denounce the President Donald Trump administration’s cruel and unjust policies including the detaining of migrant children and attacks on healthcare access. Rev. Dr. William Barber and Rabbi Arthur Waskow, director of the Shalom Center, initially conceived of the action, organizations say.

At today’s #MoralWitnessWednesday, Secret Service told hundreds of clergy it would be a felony if we set foot on Pennsylvania Ave to bring our petition near the White House.

While kidnapping and imprisoning children is evidently “lawful,” protesting that violence is a crime. pic.twitter.com/ZPX3dFKR3p

In a tweet ahead of the protest, Barber, who’s also president of social justice group Repairers of the Breach and a co-chair of the Poor People’s Campaign: A National Call for Moral Revival, explained the motivation for the action: “Jeremiah 22 tells us that when political leaders abuse their office & hurt the poor, we must show up in person to deliver a prophetic indictment. Now is the time. Join us June 12.”

Jeremiah 22 tells us that when political leaders abuse their office & hurt the poor, we must show up in person to deliver a prophetic indictment. Now is the time. Join us June 12. https://t.co/VJyX6DCTbB pic.twitter.com/n5bEV8Biwz

Other religious leaders taking part include Rev. Dr. Liz Theoharis, co-chair of the Poor People’s , Campaign; Imam Al-Hajj Talib ‘Abdur-Rashid, Ameer/president of The Muslim Alliance in North America; and Rabbi Esther Lederman, director of Communities of Practice and Congregational Innovation for the Union of Reform Judaism.

Petitions delivered as close to the White House as law enforcement would allow the faith leaders to get.#MoralWitnessWednesday pic.twitter.com/pu5GzXpMQn

Rabbi addresses police directly, says any crime they commit by protesting would be “far less than the crimes against Americans and against all human beings” than the Trump administration.

Asks them to “look into your hearts.” pic.twitter.com/xNfNIERsKD

We are facing the White House exercising our #1A rights (that haven’t been taken away by our fascist-flirters in the government…yet). Clergy are ready to be arrested. #MoralWitnessWednesday pic.twitter.com/8nGlqYkOGF

At the gates of the White House, the activists delivered signed petitions, which state, in part:

As President Trump and his administration let the nation suffer, we must lead with a unified proactive and creative response that is not confined by “Right” or “Left,” Democrat or Republican, but is rooted in the clear moral Center of right and wrong. It is time to warn the nation and call this administration to repent of their sins.

Friends, it is time for us to go together to the palace gates with a clarion call:

Instead of covenantal leadership for justice, compassion, healing, and the empowerment of all, these sinful acts of the current administration pursue subjugation: subjugation of racial, religious, ethnic, and gender minorities; of women; of children; of the suffocating middle class, workers, family farmers, the poor, and people who fall sick; of immigrants and refugees; of the free press; of the Constitution; even of Earth, our common home. This hate-filled subjugation violates the Covenant. It must not stand.

Addressing the support that Trump has from some leaders in the evangelical Christian community, Barber told the Washington Post in an interview published Wednesday that such backing must not go unchallenged.

The “Trump administration—I never say just Trump, because he’s not by himself—has violated everything that Jesus said ought to be the first priority of nations,” Barber said.

“And so it grieves me that brothers and sisters who claim to follow Jesus would do this and would be so loud on things that Jesus is so quiet about and so quiet on the very thing Jesus is so loud about,” Barber told the Post. “And that’s why it must be challenged. It cannot be allowed to just exist and be called evangelicalism when many times it is a form of heresy.”

The three-day event will feature the rollout of the social justice group’s “Moral Budget” as well as a forum where some of the 2020 presidential hopefuls will take questions from anti-poverty activists.

Politico reports that seven candidates will appear at the forum, including Joe Biden, as well as Sens. Bernie Sanders, Elizabeth Warren, and Kamala Harris.