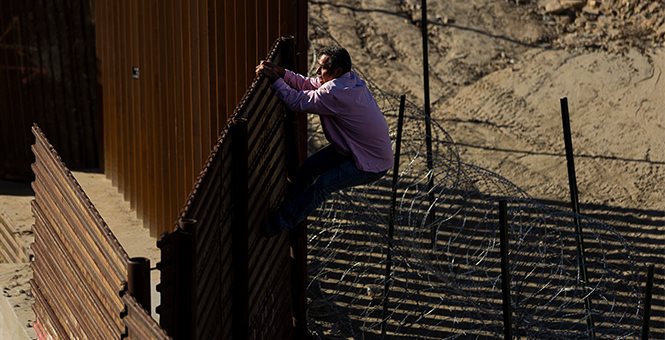 There has been a steady stream of heartbreaking news at the southern border under the President Donald Trump administration, including the jailing of children and deaths of detained migrants.

Exclusive: We found the youngest known child separated from his parents at the border under President Trump. He was only 4 months old https://t.co/IHSAe6ebrs

The New York Times reported Friday that the youngest child taken from his parents at the southern border over the past three years under the Trump administration’s separation policy is four month-old Constantin Mutu, from Romania. Constantine and his father, Vasile, were apprehended in Texas by border patrol agents. Vasile, who has a criminal record, was detained and deported to Romania while Constantin was sent to live with a foster family in Michigan.

Eventually, the family was reunited—mother Florentina and the couple’s four year-old son got lost in Mexico and returned to Romania to join the couple’s other three children ahead of Vasile and Constantin—but the case shows how the administration isn’t bound by age in separating families and raises questions about who else is in custody.

Lawyers visiting an immigrant processing station in Texas say they found a baby, barely a month old, wrapped in a dirty towel, wearing a soiled onesie and looking listless. https://t.co/R0ZVzYKrzD

HuffPost reported Thursday that a teenage mother and her one month old were basically ignored for a week by Customs and Border Patrol (CBP) agents until being transferred to a resettlement facility after the neglectful treatment became public.

Lawyer Hope Frye was one of those who raised alarm over the treatment of both children, she told HuffPost, after finding that the mother had received pain medication and that the baby had not had any medical attention for the time she was held by CBP:

Frye said one of her colleagues, an immigrant rights advocate, told her on Wednesday that the baby had not cried for five hours and had become “weak and listless.” The advocate, according to Frye, said that since the infant was wrapped only in a towel she was concerned her body temperature was dropping, which can be fatal.

As HuffPost reporter Angelina Chapin noted, medical experts are on record saying that “Border Patrol centers are not a safe place for kids, in part because no thorough medical assessments are provided by pediatricians and diseases can spread quickly in the environment.”

CBP’s bloated budget has gotten even bigger under Trump. This article provides even more proof that the fight to #DefundHate is more urgent than ever. https://t.co/wIqBMdvypK

That treatment isn’t much of a surprise given revelations from text messages between CBP agents that show a culture of bigotry and hate. The messages, which were made public in court filings from a case in Arizona where a CBP agent is accused of murder, contain offensive and dehumanizing language and point to an agency environment where seeing migrants as the enemy was encouraged.

As Rolling Stone‘s Tim Dickinson reported Thursday, the racism in the language used by CBP agents extends to the general name they have for migrants:

Throughout the texts, illegal border crossers are referred to as “tonks.” A federal court case from 2004, which also centered on accusations of excessive force by the Border Patrol, includes an agent’s definition of “tonk” as “the sound heard when a ‘wetback’ is hit over the head with a flashlight.”

While CBP defenders claim the term refers to “Territory of Origin Unknown,” Dickinson cites a ProPublica piece from May that mentioned CBP abuse of children by hitting their heads with a flashlight as an indication that at the very least the practice is understood as a tactic within the agency.

A 7-year-old girl from India just died crossing the U.S. border. Her body was found in the same region where Scott Warren and No More Deaths has provided food and water to migrants to avoid tragedies like these. https://t.co/5FgFs7GF2i

A seven-year-old girl believed to be from India died on the southern border in Arizona. Her body was found Wednesday morning.

A woman and an eight-year-old, believed to be traveling with the dead girl, were detained by CBP early Friday morning.

Immigrant rights advocates said the death was near where activists from the group No More Deaths—including Scott Warren, whose trial for providing aid to migrants ended in a mistrial Tuesday—had left water and food until being shut down by CBP. CBP agents told local media they were “heartbroken” by the child’s death.

The death marks the second time a seven-year-old died while trying to cross the border. In December 2018, a Guatemalan child of the same age died in CBP custody, one of at least six recent deaths of children in U.S. custody.

According to immigration rights advocates from RAICES, companies that are assisting the government’s border activities are enabling “a machine of deportation.”

“The government could not do what it is doing now without them,” said Ryan of the tech companies.

“What we’ve seen is a scaling up and a quickening of the efficiency of this tyrannical operation,” he added.

Tech companies are profiting from their cooperation with the deportation machine, but, said Ryan, there will be a reckoning.

“If tech wants to walk hand in hand with our government in this experiment in tyranny, then go for it,” Ryan said. “But we will be here when that music is over, and there will be no chair for them to sit when everybody is sitting down.”