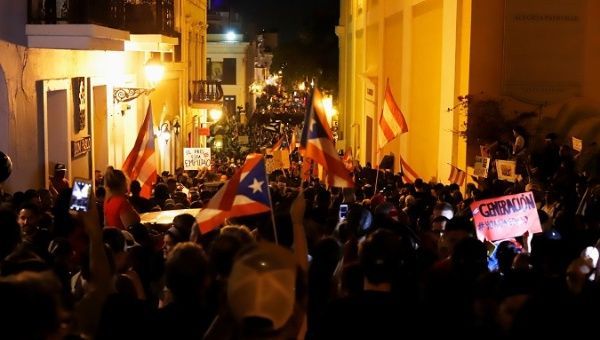 Hundreds of Puerto Ricans marched to the governor’s mansion Friday night, decrying the appointment of Gov. Pedro Pierluisi as an illegitimate continuation of Rossello’s policies.

The Puerto Rican people came together, stood up, and forced Governor Rosselló to resign. They showed us what ordinary people can achieve when we organize. Our job now is to make sure they get fair and responsive representation. Puerto Rico deserves democracy, not austerity. https://t.co/GmwAUFZHQm

Pierluisi’s term as governor could be very short-lived, as the Senate will vote to approve or reject his appointment on Monday. But critics are wary of the former secretary of state, who has ties to the federal oversight board which has pushed austerity policies as the island territory has struggled with a bankruptcy crisis in recent years and a recession that’s gone on for more than a decade.

“He’ll keep promoting policies of austerity, cutbacks, everything that the board says,” Rosa Cifrian, a professor of nursing who attended the latest demonstrations, told Al Jazeera.

“On Monday at 8:00am the Municipality will be filing an appeal challenging the oath of Pierluisi,” Yulin Cruz tweeted.

The ACLU’s Puerto Rican chapter accused Pierluisi of “hijacking the constitution” by assuming the role of governor without the input of the territory’s Senate.

#rickyrenuncia is no longer Governor of Puerto Rico. Our 1 1/2 hour long Secretary of State will now be sworn in as new Governor, circumventing Constitutional line of succession. @aclu @latinojustice

Given that it can be inconvenient, but in Puerto Rico it really is about the Constitution; not just parts that are convenient. Public officials that swear to defend the constitution are obligated to do so. @ACLU @ColegioSiempre

Huffington Post climate reporter Alex Kaufman noted on Twitter that in addition to Pierluisi’s ties to the federal oversight board, he is a former fossil fuel lobbyist and, like his predecessor, is in favor of privatizing the public power authority.

Pedro Pierluisi, the newly appointed governor of Puerto Rico, is a former lobbyist for AES, the fossil fuel utility that until recently stored an unsecured mountain toxic coal ash in Guayama.

As governor, he’ll help oversee the privatization of the state power company. https://t.co/NqgpAgpAXz

If the Senate does not ratify the new governorship on Monday, Pierluisi has said he will hand over the position to the current secretary of justice, Wanda Vasquez, who has come under scrutiny for corruption allegations of her own.

Women’s rights groups allege that Vasquez failed to address gender-based violence issues on the island while she was head of Puerto Rico’s women’s affairs office. She has also been criticized for declining to investigate ethics violations of members of her own party and for her intervention in a theft case involving her son.