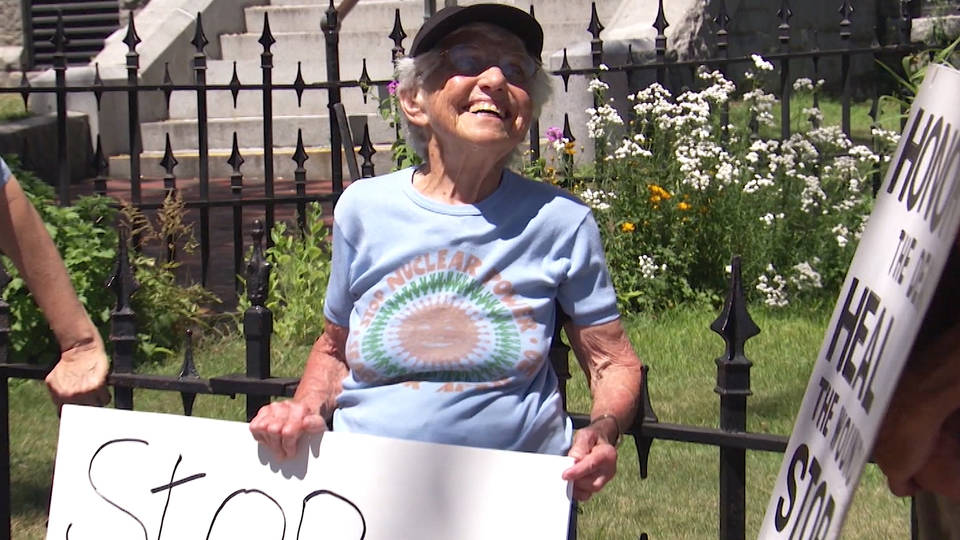 She died last Tuesday in her home in Northampton, Massachusetts, where she lived since 1951, surrounded by her family, who wrote that her motto was “Live simply so that others can simply live.”

Crowe, wrote Janet and Wayne Dinelli in the online guest book for her obituary, was a “true spirit and a trailblazer in the name of peace.”

<goodbye old friend> one evening, some years ago, there was a knock on the door. Frances Crowe came to dinner. She heard that Rosa had done a poster on Gandhi. She went over it with the kids. Her T-shirt read – Resist with Compassion. It was perfect. pic.twitter.com/A5etOD8gON 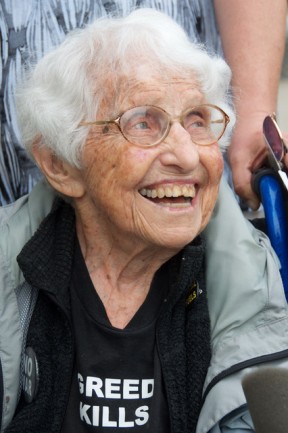 It was just months ago that the local Daily Hampshire Gazette named the Quaker centenarian their person of the year. “Within the activist community, everyone’s been touched by her,” Northampton High School student Cherilyn Strader told the paper. “There’s no way around the impact that she’s had.”

It was back in 1945 that her tireless activism began—when the U.S. dropped the atomic bombs on Hiroshima and Nagasaki. At the time, her husband, the late Tom Crowe, was a physician in the Army Medical Corps.

When Crowe heard about the bombing, she told Democracy Now! in 2005, “I really unplugged the iron, left the placemat that I was ironing, and went out looking for a peace center in the streets of New Orleans.”

“There wasn’t very much going on in resistance to war in those years,” Crowe recently told New England Public Radio.

But resist she did, and fiercely, leading to roughly 100 arrests, though, in her estimate, it was “not enough” times.

Her actions included draft counseling during the Vietnam War, blockading the Vermont Yankee nuclear plant, throwing blood on nuclear submarines in Groton, Conn. and spray painting them with the message “thou shalt not kill,” as well as starting numerous organizations including the local chapter of the American Friends Service Committee in 1968, and, with others, the local chapter of Women’s International League for Peace and Freedom.

Records of all that work are housed at Smith College, available for all to see. The papers, including brochures, letters, and posters, “not only show how much she had to work to protest a single injustice, but how few injustices—if any at all—escaped her attention,” reported the Gazette.

“As we celebrate her life and mourn her passing,” wrote Lindsay Koshgarian of the Northampton-based National Priorities Project, “we know that the best tribute of all is to keep on fighting.”

To see more about Crowe’s activism and hear her in her own words, watch this segment from Democracy Now!: